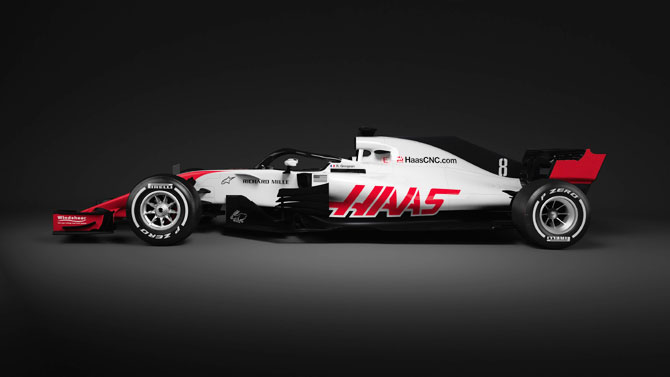 Rich Energy had previously expressed an interest in buying Force India before the financially-stricken Formula One team was rescued in July by a consortium led by Canadian billionaire Lawrence Stroll.

US-owned Haas announced the deal at the Mexican Grand Prix on Thursday but gave no details other than saying a significant change of livery would be involved.

"Our partnership with Haas F1 Team ensures we have a prized asset on which to build our global marketing efforts," said William Storey, chief executive of the London-based company, in a statement.

Storey announced on www.linkedin.com on October 12 that Sullivan, West Ham's co-chairman and majority shareholder, had taken a 'significant stake'.

Haas, who enjoy a close technical partnership with Ferrari, are fifth in the Formula One constructors' standings.

Grandmaster and former world junior champion Abhijeet Gupta crashed through the solid defenses of higher-rated compatriot Vidit Gujrathi in the fifth round of Isle of Man International Chess tournament in Isle of Man, UK, on Thursday.

Having drawn with Boris Gelfand of Israel in the third round and beating Le Quang Liem of Vietnam in the fourth, Gupta continued his good form, outplaying Gujrathi.

Playing the white side of a topical Ragozin defense, Gupta outwitted Gujrathi, a consistent top fifty player in the world these days.

Getting a balanced position out of the opening, Gujrathi fumbled in defence and lost a pawn while going for mass exchanges and the resulting endgame was child's play for the 29-year-old Gupta.

With 4.5 points out of a possible five in the toughest open of the world, Gupta shares the lead with Arkadij Naiditsch of Azerbaijan, Jeffery Xiong of United States and Wang Hao of China.

Six players follow the leader, a half point behind including world elite members Sergey Karjakin of Russia and Maxime Vachier-Lagrave of France while the likes of Viswanthan Anand and Vladimir Kramnik occupy the next wolf pack of 27 players with 3.5 points in their bag.

The fifth round saw Anand taking a half-point bye going in to the last four games.

Nihal Sarin played out a draw with B Adhiban while in another all-Indian duel Soumya Swaminathan split the point with Debashish Das.

In the sixth round, Gupta will take on Hikaru Nakamura and Adhiban is up against Levon Aronian of Armenia. Anand will try to make his white pieces count against Daniel Fridman of Germany and Gujrathi will hope for a big comeback against Mikhail Antipov of Russia.

Sourav Kothari ousted local challenger Martin Goodwill with clinical brilliance to storm into the semi-finals of the WBL World Billiards Championship in Leeds on Thursday.

Kothari remains as the only Indian in fray for the coveted World title.

He will meet the former World champion David Causier of England in the semifinals.

The other semi-finals will be played between Rob Hall of England and Peter Gilchrist of Singapore.