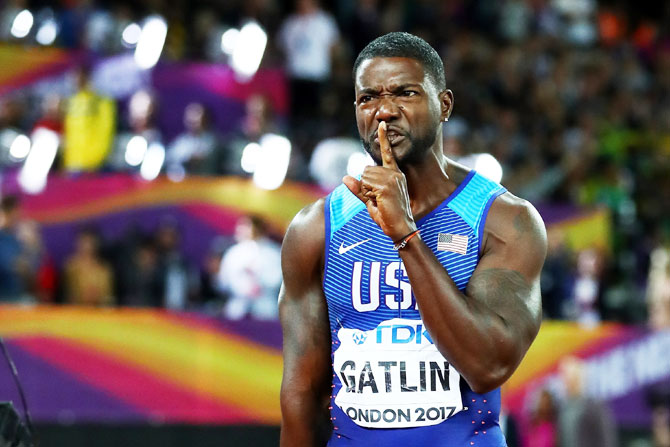 IMAGE: The International Association of Athletics Federations confirmed the 37-year-old Justin Gatlin had been injured during the race. Photograph: David Gray/Reuters

Reigning World 100 metres champion Justin Gatlin should be back training within the week after tests were negative for a possible hamstring injury, his manager said on Wednesday.

The American sprinter slowed noticeably about 65 meters into a race he was leading and began grabbing his left hamstring before finishing fourth in Zagreb on Tuesday.

"He said he started to feel something grabbing, so he immediately tried to protect against any potential injury occurring," Renaldo Nehemiah said in an email.

Tests to Gatlin's hamstring "showed he still had 100% strength in the leg and there were no adhesions or anything," Nehemiah added.

It was the second time within a week the 37-year-old had slowed in a race while leading.

Gatlin finished fourth in the Zurich Diamond League final on Aug. 29 after Nehemiah said he lost cadence after stumbling out of the blocks.

The Zagreb race, on a relatively cool evening, was Gatlin's last before defending his world title in Doha later this month.

He is expected to resume training in Florida several days after returning home, Nehemiah said.

American-Ecuadorian Formula Two racer Juan Manuel Correa is being moved to intensive care in Britain after being injured in an accident that killed French driver Anthoine Hubert at Spa-Francorchamps in Belgium last weekend.

The 20-year-old suffered a spinal injury and fractures to his legs in Saturday’s horrific crash during the support race for the Belgian Formula One Grand Prix.

“Juan Manuel Correa will be transferred today (to) a specialised ICU located in the United Kingdom,” a statement issued by his media team said on Tuesday.

“He will continue his recovery process in the care of a specialist team of physicians.”

Correa, a development driver for the Alfa Romeo Formula One team and grandson of former Ecuadorian president Rodrigo Borja, underwent more than four hours of surgery in Liege after the accident. He remains in a stable condition.

The National Football League (NFL) signed a multi-year partnership with Chinese video app TikTok on Tuesday to stream match highlights and behind-the-scenes footages as part of its strategy to boost online presence amid a rise in cord-cutting.

With more viewers flocking to online platforms for content, NFL has been signing partnerships worth millions of dollars, with companies including Amazon.com and Twitter to stream content.

TikTok hit the 500 million mark in monthly active users globally, according to a report in July by the South China Morning Post.

With the presence of celebrities like Ariana Grande and Katy Perry, the platform is a hit among teenagers and post-millennials, a key target audience of sports content.

"Partnering with TikTok is a natural extension of our media strategy," said Blake Stuchin, vice president, Digital Media Business Development for the NFL.

The National Basketball Association signed a similar partnership with TikTok in November and now has over 5 million followers on the platform.