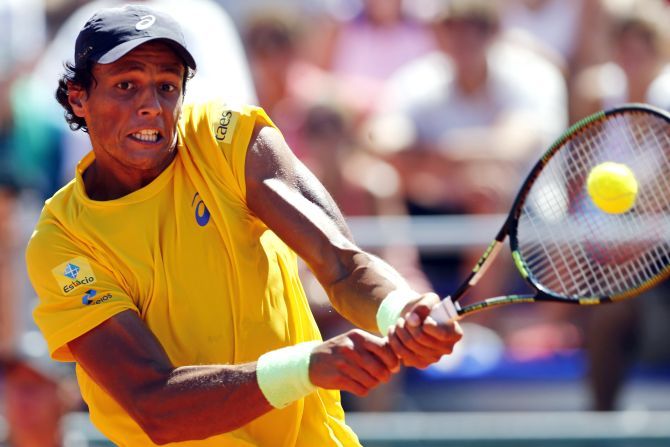 Brazilian Joao Souza has been banned from tennis for life after being convicted of multiple match-fixing and other corruption offences, the Tennis Integrity Unit (TIU) said on Saturday.

A TIU investigation found that the 31-year-old had committed several anti-corruption breaches between 2015 and 2019 including fixing matches at ATP Challenger and ITF Futures tournaments in Brazil, Mexico, the United States and Czech Republic.

"The player is permanently ineligible to compete in or attend any sanctioned event organised or recognised by the governing bodies of the sport," TIU said in a statement.

Souza, who had been provisionally suspended since March 2019 pending completion of the investigation, was also fined $200,000 following a disciplinary hearing in London on January 14.

The TIU said Souza had not reported corrupt approaches, had failed to co-operate with their investigation, including destroying evidence, and "solicited other players to not use best efforts" in matches.

Souza reached a career-high singles ranking of 69 in 2015 and is currently ranked 742. As a doubles player, he achieved his highest ranking of 70 in January 2013. The 35-year-old gave birth to a son last March and had not competed since July 2018. She only returned to competition in early 2018 after having her first child, a daughter named Kimoana, in 2017.

"These are Games I'm really excited about attending, especially going as a mum of two now," Adams told TVNZ after qualifying for the July 24-Aug. 9 Tokyo Games with throws of 18.55 and 18.65 metres at a meeting in New Zealand.

"The last time I competed was 20 months ago so it has been a long road but quite an exciting journey."

Adams finished seventh as a teenager at Athens in 2004 and won gold at Beijing and London before being pipped in Rio by American Michelle Carter's massive final throw.

She took time off after Rio to have her first child and made her international return at the 2018 Gold Coast Commonwealth Games, where she clinched silver.

Adams announced her second pregnancy in October 2018, just weeks after she had opened up about problems with infertility.

She had been told if she wanted more children she would probably need to do so before the Tokyo Games.

Adams has kept a low profile since her son Kepaleli was born last year and said her biggest battle in her return to training and competition had been mental.

"I am in pretty good shape and I just wanted to come out and have a stable competition, get my nerves under control and have a good technical competition, which I did," she added.

"There is always a lot of pressure put on myself, by myself ... and I want to go to the Olympics and be competitive."