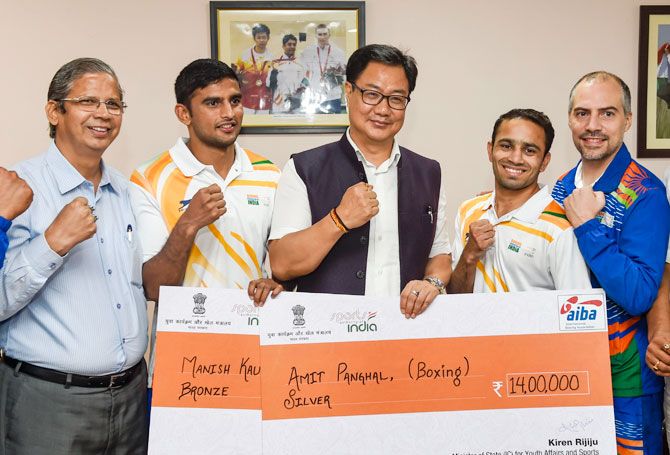 While Panghal was handed a cash award of Rs 14 lakh for his silver medal winning effort in the 52kg category, Kaushik received Rs 8 lakh for winning the bronze in the 63kg.

Panghal, who was the second seed, created history as he became the first male Indian boxer to reach the final of the World Championship. The 24-year-old from Haryana had also won the gold medal at the 2018 Asian Games and 2019 Asian Championships along with a silver medal at the 2018 Commonwealth Games.

23-year-old Kaushik had an impressive run in the tournament as he knocked out fourth seed and Asian Games silver medalist Baatarsukhin Chinzorig in the round of 16, before seeing his tournament end in the semi-finals to top seed Andy Cruz Gomez.

"I am very proud of India's best-ever performance at the men's Boxing World Championship. I feel India has a great future in boxing. In fact, even those boxers who reached the quarterfinal stage need to be congratulated for their performances," Sports Minister Rijiju said.

"This is the Olympic year and these medals are a sign that India is indeed prepared to put up a good show at Tokyo 2020. I want to assure all athletes, across all sporting disciplines preparing for Tokyo that we will extend all support."

Russia will miss the world athletics championships for the second time in a row after the sport's governing body the IAAF extended the ban against country's federation on Monday.

The IAAF confirmed the decision four days before the start of the competition in Qatar after hearing a report from its Task Force (TF) overseeing Russia’s reinstatement efforts.

"We are aware of the allegations of manipulation of the data and that an investigation is ongoing," said Rune Andersen, head of the IAAF Task Force. "In the light of that the task force recommended that RUSAF (the Russian athletics federation) not be reinstated and the IAAF council unanimously agreed."

Some Russians with no doping history, including high jumper Maria Lasitskene who is Russia's only track and field athlete currently holding a world title, have been cleared to compete internationally as neutrals.

However, the Russian flag cannot be flown nor the national anthem be played.

IAAF president Sebastian Coe said that feeling was "very strong" among council members that the suspension should continue.

"No one country is bigger than the championships," he told a media conference.

"It does not remotely surprise me that the council unanimously endorsed the strongest recommendation we have probably had thus far that the Russian federation remain suspended."

"The responsibility of an international federation is to maintain where possible the level playing field in competition."

RUSAF was suspended in November 2015 after a report commissioned by WADA found evidence of widespread doping in the sport.

Russian authorities have denied the existence of a state-sponsored doping programme in the country but have accepted that some senior officials were involved in providing banned substances to athletes, interfering with anti-doping procedures and covering up positive tests.

Efforts to have the federation reinstated have been hindered by reports of mismanagement and doping violations.

The IAAF previously extended Russia’s suspension in June and said a Reuters report that showed banned Russian coaches were still working with athletes would be investigated.

In September last year, WADA voted to reinstate the Russian Anti-Doping Agency RUSADA, clearing the way for the country to compete at the Olympic games in Tokyo next year.

However, that was also under threat following WADA's announcement on Monday.

Young Indian shuttler Malvika Bansod has claimed her maiden title at the Maldives International Future Series with a stunning straight-game win over top seed Thet Htar Thuzar of Myanmar in women's singles in Male in Maldives.

Among other Indians, top seeded Kevin Arokia Walter settled for a runners-up finish after going down 13-21, 14-21 to second seeded Thai Kantawat Leelavechabutr in men's singles competition.

Whitfield, who announced his retirement in 2013 after 16 years racing for Canada, unexpectedly won the inaugural Olympic triathlon event at Sydney in 2000 and added a silver eight years later in Beijing.

In Sydney, Whitfield was in the middle of the field after the swimming and cycling legs but used his sprint speed to pass the leader, German Stephan Vuckovic, less than 300 metres from the finish line before pulling away for the victory.

Whitfield's triumph is credited with sparking a massive growth in the sport across Canada.

Despatie became the first Canadian man to reach an Olympic podium in diving when he won a silver medal in the individual 3m springboard at the 2004 Athens Games. He repeated the feat four years later in Beijing.

Emilie Heymans, who became the first female diver in the world to win medals at four consecutive Olympics, and Christine Girard, who is Canada's first ever Olympic weightlifting champion, rounded out the four athlete inductees.

Girard's bronze medal from the 2008 Beijing Olympics and gold medal from the 2012 London Olympics were awarded several years after the competition when athletes who had initially placed ahead of her were disqualified for doping.

Now a passionate advocate for anti-doping in sport, Girard shares her story and is actively involved in discussions with domestic and international anti-doping advocates.

"These individuals remind us that the Olympic Movement is about more than just victory," COC President Tricia Smith said in a statement. "It's about making an indelible impact on our communities, our nation and the next generation."

The women's ice hockey team that conceded just two goals en route to a gold medal at the 2010 Olympics and women's soccer team that in 2012 won Canada's first Summer Olympic team sport medal (bronze) since 1936 are also being inducted.

Hiroshi Nakamura, who is responsible for the establishment of judo as a competitive sport in Canada and served as head coach at five Olympics is also being inducted.

Jack Poole, who played a key role in bringing the Olympic Games to Vancouver in 2010 as chairman of the bid corporation, and Randy Starkman, an award-winning journalist known for his coverage of amateur sports, will both be inducted posthumously.

The induction ceremony will take place in Toronto on Oct. 23 and individual inductees will be commemorated with murals that will appear in their respective local communities across Canada. 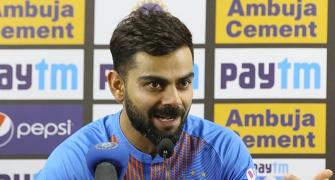