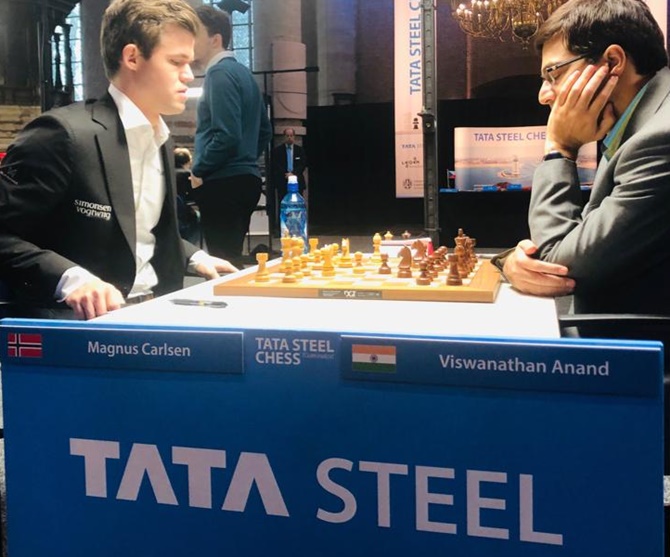 Viswanathan Anand's quest for a sixth title in the Tata Steel chess tournament suffered a serious setback as he lost to reigning world champion Magnus Carlsen of Norway in the tenth round, in Leiden, The Netherlands, on Thursday.

Having done the hard work so far in the event, the loss might well prove decisive for Anand. According to pundits, Anand would not have lost the endgame he reached against any other player.

The day saw the event moving to Leiden from Wijk Aan Zee and things got heated up pretty quickly as Vidit Gujrathi tamed former world champion Vladimir Kramnik of Russia in the first game.

As a result, Carlsen emerged as the sole leader on 7 points out of a possible ten and Anish Giri is in sole second spot a half point behind. Anand slipped to joint third position on six points sharing it with Ding Liren of China and Nepomniachtchi while Vidit Gujrathi is now joint fifth on five points with Teimour Radjabov of Azerbaijan.

Playing black, Anand was up against a side variation in the Ruy Lopez and equalized without much ado.

However, it was clear that Calsen was only looking at a long game which he got. The pieces got traded and Carlsen managed to find a miniscule advantage in the ensuing rook and knight endgame.

Anand still kept things under control with some precise play leading to a knight endgame a pawn down that should have been a draw with correct play.

Carlsen continued to exert pressure here and after six and a half hours of play Anand blundered and walked in to a lost position. The game lasted 76 moves. "Obviously it was a huge win today, I never thought at any moment it was very likely," said Carlsen.

Gujrathi took advantage of some inaccurate display in opening by Kramnik. It was a Nimzo Indian wherein the Indian got his attack rolling on the king side with a thematic pawn sacrifice and simply rolled over in just 29 moves.

In the masters section played at Wijk Aan Zee, young Grandmaster R Pragnanandhaa suffered a loss from a completely winning position against Maxim Chigaev of Russia.

Bhullar, Sharma fritter away early gains; Fitzpatrick leads at 7-under

Gaganjeet Bhullar and Shubhankar Sharma frittered away good starts to end with a modest one-under 71 each in the first round of the Dubai Desert Classic.

Tenth tee starters Bhullar and Sharma fell from being three-under and two-under at one stage. They finished the day at Tied-58th while SSP Chawrasia bounced back from being three-over to even par, giving himself a chance of make the cut.

India's fourth player, amateur Rayhan Thomas, missed a whole bunch of putts and then a careless tap for a par turned into a bogey. He had a double on sixth and his only birdie was on 18th and he ended two-over.

Matthew Fitzpatrick was leading with a seven-under 65 and trailing him were eight golfers at 6-under 66, while another nine players, including defending champion, Li Haotong, are 5-under 67 as 89 players shot par or under on a low scoring day.

Two of Asian Tour's biggest stars, Thongchai Jaidee and Scott Hend, were among the six players who were one shot behind the leader Fitzpatrick.

For most part of the day, the leaders stood at 6-under 66 till Fitzpatrick blazed through the back nine with six birdies, four of them on last four holes for a 65.

Sharing the second place with Thongchai and Hend, were Bryson DeChambeau, the highest ranked player in the field this week, the 2017 Masters champion, Sergio Garcia, Matthieu Pavon, Kalle Samooja and Roman Langasque, who had two holes to play.

Sharma, the reigning Asia No. 1, Bhullar brought home cards of one-under 71 each after being way better earlier in the day.

Bhullar was three-under with three birdies in a row after starting from 10th, while Sharma was two-under through 14 before dropping shots on sixth and eighth, his 15th and 17th holes though a birdie on 18th eased the pain.

In contrast Chawrasia, who was slipping down at three-over through 12 holes that had two birdies, a bogey and two doubles, fought back with three birdies in last five holes to finish even par.

Thongchai, playing his 19th Desert Classic in a row, had his best-ever start at the event with six-under 66. It could have been even better but for the double bogey on the closing 18th hole at the Majlis Course at Emirates Golf Club.

Thongchai, who hits 50 in November 2019, and has won 13 times on Asian Tour and eight times on the European Tour wins, chose to shoot his best-ever in the Dubai Classic on the same day as the Asian Tour announcing the fourth staging of his Thongchai Foundation 2019 event on Asian Development Tour.

The All India Tennis Association (AITA) had feared that DD may not provide the live coverage of the tie unless the judiciary intervenes since the broadcaster did not telecast major international events held in the country in the past 12 months despite a binding agreement.

The federation had complained that it caused "a great loss of reputation to the AITA in front of global bodies ATP (for men), WTA (for women) and ITF (governing body)".

"We had approached the Delhi High Court and now we have secured the telecast by DD. It's an important tie for us. Not all the fans across the country came make it to the venue, so it was important that the matches are shown on TV," AITA Secretary General Hironmoy Chatterjee said.

The tie will be hosted on grass court of Calcutta South Club on February 1 and 2.

"We are making elaborate arrangements for the successful hosting of the tie," said Chatterjee, who recently underwent a shoulder surgery.

AITA has an agreement with Doordarshan since 1997 with a renewal clause after every five years. The latest contract renewal was inked in January 2017 and the agreement is valid till January 2022.

As per the agreement, DD has the exclusive rights to cover the Davis Cup matches in India and international tournaments, including Challengers and Futures. 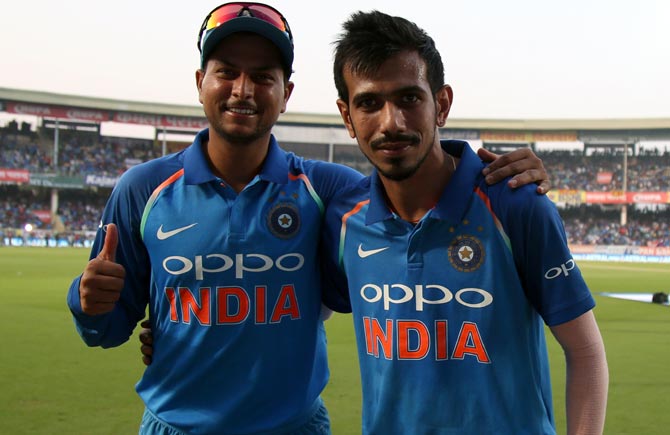 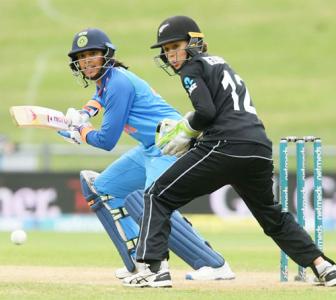 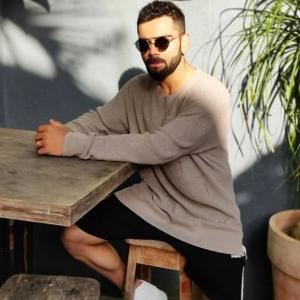