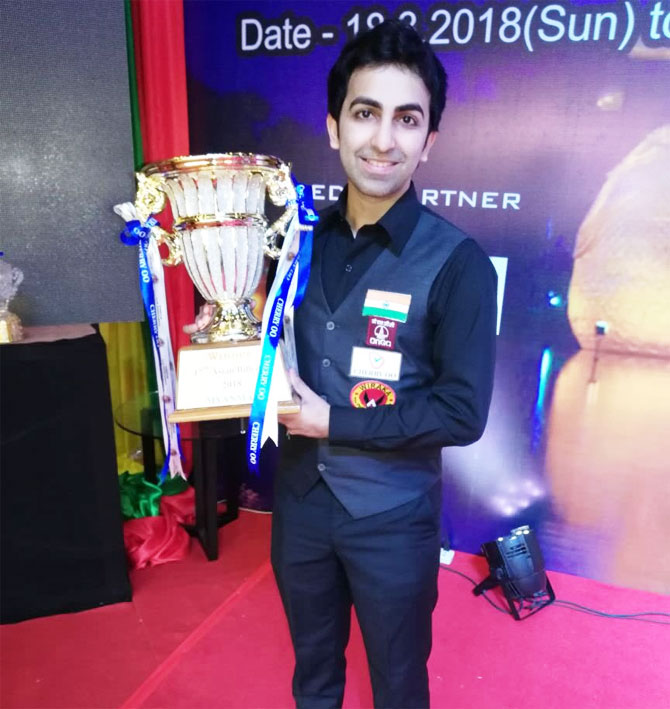 Pankaj Advani on Saturday defended his Asian Billiards Championships title in style by demolishing his practice partner B Bhaskar 6-1 in the summit clash in Yangon, Myanmar.

"Asian Billiards Champion 2018. Delighted to successfully defend my title," Advani wrote on his Twitter handle with a picture with the trophy.

With this win, Advani remains the reigning Indian, Asian and world champion in billiards for 2017-18.

This is Advani's 11th gold medal at the Asian level of cue sports. His continental billiards title tally has gone up to seven, in addition to the back-to-back Asian Games gold medals in 2006 and 2010, one 6-red snooker title and a snooker team gold.

After losing the first frame, thanks to a well-crafted 100 by Bhaskar, the rest of the match saw Advani punish his opponent for every mistake made with a frame-winning break.

Advani left the spectators mesmerised with top quality billiards as he scored a deadly barrage of breaks in the final consisting of 102, 83, 94, 96 and 99.

Advani scored heavily in the fourth and fifth frames, not allowing Bhaskar to put a single point on the board. These two frames appeared to be the turning point of the tie as it kept Bhaskar away from the table while Advani grew from strength to strength, making him invincible from that point on.

There were spirited attempts thereafter of a comeback from Bhaskar but Advani was in no mood to let his lead and title go. He completed the proceedings with a world-class 99 break to seal the match and championship yet again. Bhaskar is yet to win an Asian title.

"This Asian crown is special as it comes just before the Padma Bhushan ceremony (April 2). I got to defend my title from last year plus got to play the final with my sparring partner and dear friend Bhaskar as we bring back both gold and silver to our country and our state Karnataka," said Advani.

Promising Mumbai paddler Aadil Anand turned in a sterling display to clinch a golden double and lead India's medal charge at the 2018 Tunisia Junior and Cadet Open in the harbour city of Rades, Tunisia.

The Indian duo cruised past the local pair of Aziz Jerbi/ Amine Mohamed Oueslati in straight games 11-9, 11-7, 11-8 for their triumph.

Aadil was over the moon on his maiden success for the country and thanked the TTFI and former National champion and acclaimed coach Kamlesh Mehta for his guidance.

"I am so happy that after three years of hard work, I am being rewarded for my efforts. I will cherish this for a long time, particularly as it's my first title for India. I believe this will spur me on for subsequent tournaments," he said.

Manush also secured a bronze as he and Manav Thakkar were the losing semifinalists in the Junior Boys Doubles. They went down to the Chinese pair of Wang Yihao and Zhang Shangzheng 3-1. Mainak Nistala, who lost to Aadil Anand in the semis of the Mini-Cadet Boys' singles, picked up the other bronze medal.

Indian golfer Aditi Ashok carded an even par 72 to make the cut at Kia Classic in Carlsbad (USA).

One birdie on the front nine neutralised by a bogey on the back nine meant a 72. A day earlier, she had four birdies, but uncharacteristically dropped bogeys on two par-5s for a 70.

Her problem was the greens, where she did not hole many putts, missing numerous birdie chances.

Meanwhile, Cristie Kerr, winner in Kia Classic in 2015, is five shots ahead of the field through the second round.

Kerr's second round 64 (-8) was her lowest round this season and her lowest ever in this event. She is looking for her first win of the 2018 season after two wins in 2017.

A total of 83 players made it into the weekend at the Kia Classic after the cut line fell at even par.

Shubhankar Sharma came up with a late rally but it was not enough to fetch him his first WGC-Dell Match Play win as he went down to another first-timer South African Dylan Frittelli in the third league match in Austin (USA).

The third loss meant Sharma finished at the bottom of the four-man pool, but would have been richer with the experience in his first taste of Match Play since his win way back in All India Amateurs in 2013.

The 21-year-old Sharma, who is due to play at Houston next week and then carries on at the Masters on an invite, acquitted himself well by taking Sergio Garcia to the 18th and losing to Frittelli on the 18th.

Against Xander Schauffele, Sharma lost 3&1 at the WGC event.

Asia's big star was Kiradech Aphibarnrat, who won all his three matches. He scored a great win over World No. 3 Jon Rahm 4&3 and with a 3-0 record, he marched into the knock-out phase, where he meets Charles Howell III.

The day's big match-up was between Patrick Reed and Jordan Spieth, where the former won 2&1 and moved into the knock-out stages. Spieth was somewhat at a loss two weeks ahead of Masters.

Spieth was totally out of sorts, hitting his opening tee shot onto the range and out-of-bounds. He hit into a hazard on each of the next two holes. And when he finally caught Reed with consecutive shots to tap-in range, he missed two key putts inside 6 feet.

As Reed moves in search of his second WGC, Spieth heads to Houston Open without a top 10 in his last seven tournaments.

Justin Thomas (No. 2) and Sergio Garcia (No. 7) were the only top-10 seeds to advance to the fourth round. Thomas had the easiest time, a 7-and-5 victory over Francesco Molinari. Since defending champion Dustin Johnson is already out, Thomas could rise to No. 1 in the world if he wins this week.

Daniel Chopra, who has not played on the PGA Tour since missing the cut at the 2017 US Open, made the cut with a solid four-under 68 in the second round after his first round 70.