'Those who have given positive results do not have any symptoms and are well.' 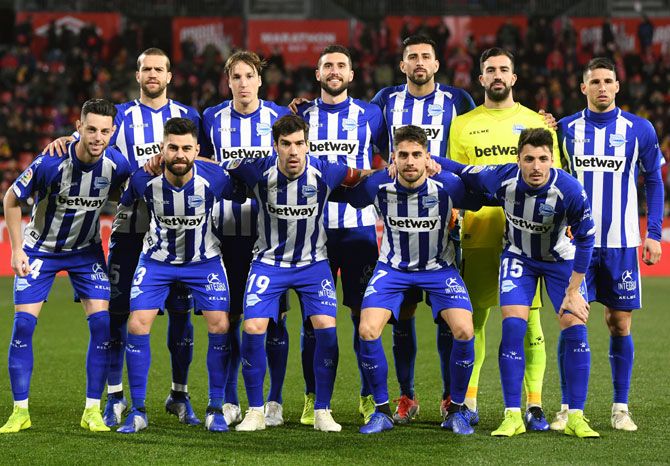 IMAGE: Alaves players line up prior to the La Liga match against Girona FC at Montilivi Stadium, in Girona, on January 12, 2019. Photograph: David Ramos/Getty Images

La Liga side Alaves have confirmed a total of 15 positive coronavirus cases, a club statement said on Wednesday.

The news comes after the Basque club revealed on Saturday that two members of their coaching staff had tested positive for the virus. None of those affected have displayed any symptoms, they added.

"There have been 15 positive cases, three of which are from the Deportivo Alaves first team squad and seven members of the coaching team," the statement said.

"None of the Kirolbet Baskonia (the club's basketball side) squad have tested positive. There have also been five club employees who have been affected.

"The club took the decision to undertake the tests in accordance with our policy of responsibility towards people who form part of our family, and the results show that it was the best and quickest manner in which to find the cases and put the necessary preventative measures in place to reduce, in any way possible, any more spreading.

"Those who have given positive results do not have any symptoms and are well."

Spain is Europe's second-most affected country by the virus after Italy, with 558 confirmed deaths and almost 14,000 cases by Wednesday afternoon, with the country in lockdown.

Citizens are only allowed to leave their homes for essential activities such as going to the supermarket or buying medicine.

Elderly people and those with other health conditions are considered high-risk.