'Infection during a match is practically impossible as we have done a study which we're releasing which will show there is a minimum risk in matches if we all respect the health measures.' 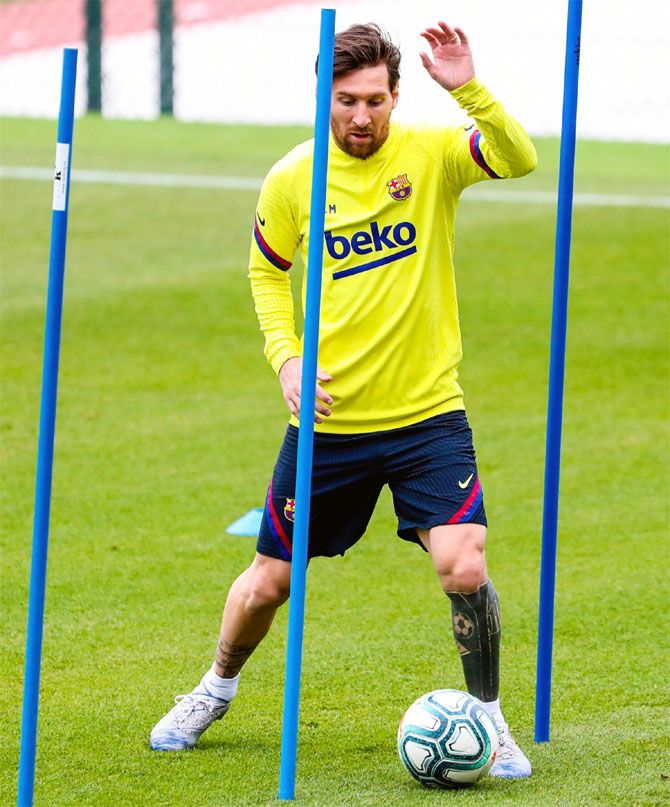 La Liga president Javier Tebas has said he hopes Spanish soccer will resume on June 12 after being halted for over three months due to the coronavirus pandemic.

All clubs in Spain's top two divisions began testing players for the virus last week and many including La Liga champions Barcelona started individual training, the second step of the league's four-phase protocol for returning to action.

"I'd like to restart on June 12 but we have to be prudent and it's not just up to football, it's also up to society, we all need to focus on complying with measures to protect health," Tebas told Spanish television network Movistar on Sunday.

Tebas confirmed all matches will take place without spectators, as will be the case when Germany's Bundesliga restarts next week, and he said the league is working on ways to add to the atmosphere although he did not give details.

He also said fixtures would be spread out so that there are matches every day.

"Now that we are not going to have fans in the stadiums we are going to have some innovative ideas for broadcasting the games," Tebas added.

"There's going to be football every day once La Liga returns."

The league reported on Sunday that five players across the two divisions had tested positive for the virus and had been ordered to stay isolated at their homes. They will not be able to return to training grounds until they have tested negative.

Tebas added that three staff members had also tested positive for the virus but he said the number of cases was far lower than expected, insisting there would be no increase in the risk of players getting infected once matches started.

"We were expecting around 25 or 30 based on the numbers in the Bundesliga and how much the virus has penetrated Spain. Out of 2,500 people tested we have only eight positive cases, which is good news," he said.

"Infection during a match is practically impossible as we have done a study which we're releasing which will show there is a minimum risk in matches if we all respect the health measures."