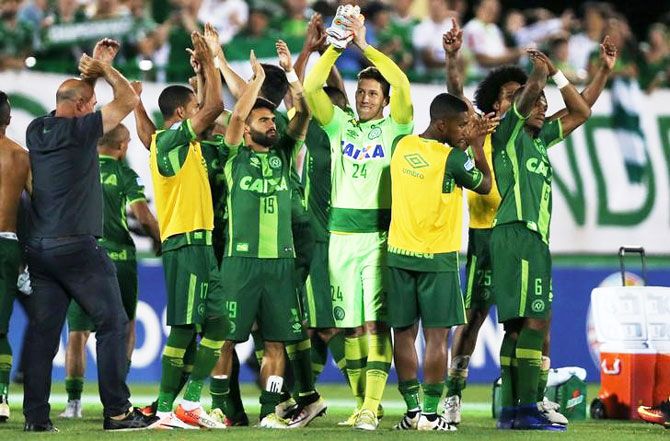 IMAGE: Players of Chapecoense celebrate after their match against San Lorenzo at the Arena Conda stadium in Chapeco, Brazil, November 23, 2016. Photograph: Paulo Whitaker/Reuters/Files

The soccer world was in mourning on Tuesday as clubs, players and fans from around the globe sent tributes and support to Brazilian side Chapecoense following a deadly air crash in Colombia that killed 76 people, including several players.

The small club from the town of Chapeco had been heading for the biggest game in its history, the first leg of Wednesday's Copa Sudamericana final, when its plane crashed in a mountainous rural area outside of the city of Medellin.

One of the first messages came from their rivals in Wednesday's now postponed final, Atletico Nacional of Medellin.

"Nacional deeply laments and stands in solidarity with @ChapecoenseReal in the accident and we await information from authorities," the home town club tweeted soon after the disaster was reported.

FIFA President Infantino said on Twitter: "At this difficult time our thoughts are with the victims, their families and friends."

Rivals of both clubs tweeted their support, with Flamengo and Santos in Brazil, and Club Junior and Millionarios in Colombia among those sending their condolences, many of them accompanied by the hashtag #ForcaChape, or Strength Chapecoense. 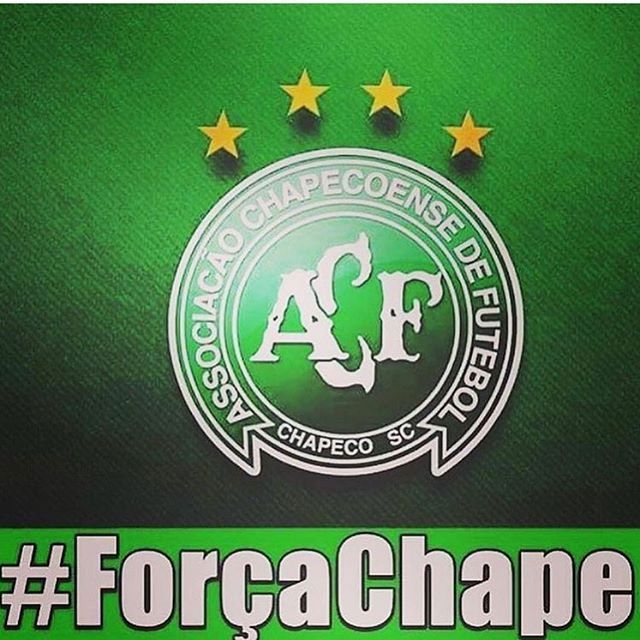 IMAGE: Barcelona footballer Neymar posted the emblem of the Brazilian club Chapecoense on his Twitter page.

Even India’s football captain Sunil Chhetri send out a thoughtful tweet: “Thoughts and prayers with the families of all on that ill-fated flight. Hope and pray there are stories of survivors.”

The crash struck a chord with clubs elsewhere, with Arsenal saying: "Thinking of you, @ChapecoenseReal" and Barcelona tweeting: "All our support and solidarity is with the victims and the families affected by the @ChapecoenseReal tragedy in Colombia."

England captain Wayne Rooney tweeted: “Sad news to wake up to today. Thoughts are with @ChapecoenseReal and their family and friends".

Real Madrid players observed a minute's silence before training on Tuesday morning and players from around the world shared their condolences.

Former Germany captain Michael Ballack tweeted: "Very sad to read #RIP #Chapecoense Remember we are never safe and anything can happen, so make sure to tell your loved ones that you care."