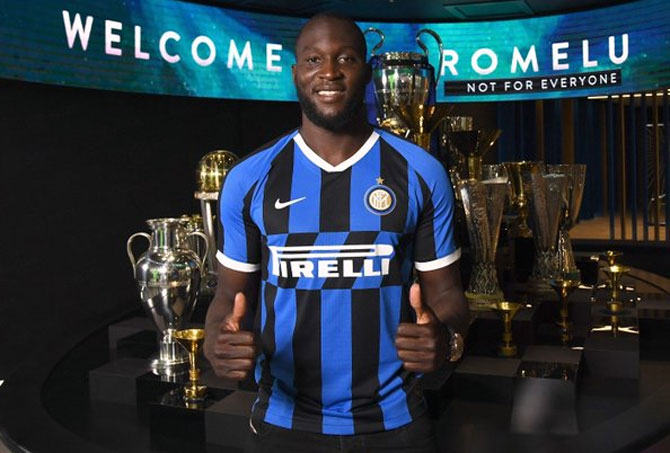 IMAGE: A jubilant Romelu Lukaku after he signed up for Inter Milan. Photograph: Inter Milan/Twitter

Inter Milan have completed the signing of striker Romelu Lukaku from Manchester United, ending the Belgium international's two-year spell at Old Trafford which began brightly but ended with him battling for a place in the team.

Inter said in a statement on Thursday that Lukaku, who will spearhead the Serie A club's attack in a revamped team under new coach Antonio Conte as they attempt to win their first major trophy since 2011, had signed a contract until June 2024.

No financial details were given but local media said the transfer fee was around 80 million euros ($89.69 million).

"Inter were the only club I wanted," said Lukaku. I'm here to bring the Nerazzurri back to the top."

The powerfully-built left-footed striker was also wanted by Italian champions Juventus, according to media reports.

Television pictures showed several hundred Inter fans waiting to greet Lukaku when he arrived at Malpensa airport on a private jet in the early hours of the morning.

He spent the night at a hotel in the city centre and underwent a medical on Thursday, media reports said.

Inter will be his sixth club in a career which began when he made his debut for Anderlecht as a 16-year-old and has taken him to Chelsea, West Bromwich Albion and Everton. Altogether, he has played 413 competitive club games and scored 187 goals.

Born in Belgium to Congolese parents, his father Roger also played professionally and represented the former Zaire while his brother Jordan plays for Serie A team Lazio.

Lukaku joined United from Everton in 2017. He scored 42 times in 96 appearances in all competitions, with 11 of those goals coming in his first two months at the club. He netted only five league goals for United in the second half of last season.

Lukaku did not play any pre-season matches for United during the close season and spent the last few days training with Anderlecht.

Conte, who replaced Luciano Spalletti at Inter after the end of last season, has been chasing Lukaku for some time and had also tried to sign him when he was manager of Chelsea

Lukaku's arrival will cast further doubt over the future of striker Mauro Icardi, who was stripped of the captaincy last year. 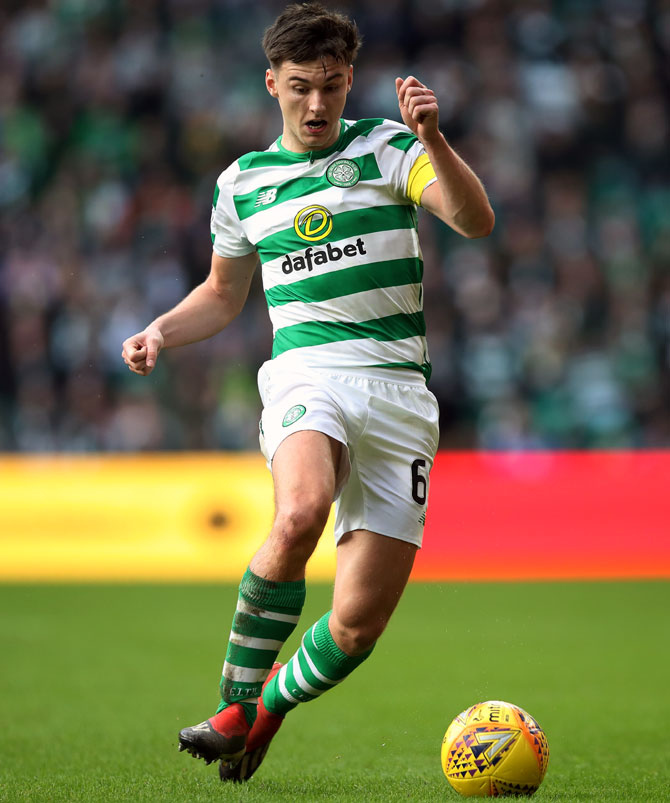 IMAGE: Kieran Tierney is the most expensive player to be signed from the Scottish Premiership. Photograph: Ian MacNicol/Getty Images

Arsenal have bolstered their defence with the signing of 22-year-old Scotland international left back Kieran Tierney from Celtic on a long-term deal, the clubs confirmed on Thursday.

"Celtic agreed to permanently transfer registration of Kieran Tierney to Arsenal Football Club for a record single amount of 25 million pounds," the Scottish club said in a statement.

Tierney, who came up through Celtic's youth ranks and helped the Scottish club seal a domestic treble last season, is Arsenal's fifth recruit of the transfer window.

They also signed Brazilian Gabriel Martinelli, Dani Ceballos on loan from Real Madrid, centre back William Saliba, who has been loaned back to St Etienne for the season, and winger Nicolas Pepe in a club record deal last week.

"We're delighted Kieran is joining us," Arsenal boss Unai Emery said. "He's a very talented player who will continue to improve. He increases our options defensively and I look forward to him joining our group."

Arsenal, who finished fifth last season and missed out on qualifying for the Champions League, have been looking to add defenders to their squad following the departures of Laurent Koscielny, Carl Jenkinson and Stephan Lichtsteiner.

The north London club are also linked with Chelsea defender David Luiz, with British media reporting he could join the club on a two-year deal on deadline day.

Emery's side begin their league campaign at Newcastle United on Sunday.

The Premier League club have been tracking the England under 21 international throughout the close season and are reported to have paid a transfer fee that could rise to 30 million pounds ($36.44 million).

Tottenham were yet to comment on the deal which is expected to see 22-year-old midfielder Josh Onomah move the other way.

Sessegnon, who plays either left back or further forward, became one of the hottest properties in English football when he helped Fulham gain promotion to the Premier League in 2018.

He was a regular for them last season as they were relegated back to the Championship.

He will create stiff competition for England international Danny Rose who looks set to stay at the club despite being linked with a move away.

Sessegnon is Tottenham's second major signing of the transfer window after they paid around 63 million pounds for powerful Lyon midfielder Tanguy Ndombele.

The 26-year-old has been linked to Premier League rivals Arsenal and Everton during the transfer window but Palace have refused to accept an offer below their 80 million-pound ($97 million) valuation.

"Yes, he's staying, absolutely. We are pleased about that. He's an important player for the club," Hodgson told Sky Sports television.

"We are looking forward to him doing this season, what he's done for the last two seasons."

Arsenal reportedly had a 40 million-pound offer rejected in July, when Zaha's brother Judicael said it was the player's dream to play for the North Londoners.

"It's been well-documented that he's wanted to leave but it's not worked out for him in that respect," said Hodgson, who sent Zaha home from training on Thursday, the last day of the transfer window.

"I think everyone here has a good relationship with him so there's not a problem with that.

"His beef is with the chairman and owners of the club because he's wanted to leave and they haven't received the offer that they think is sufficient to allow him to leave," added the former England manager.

Watford have signed Senegal international winger Ismaila Sarr from French club Rennes on a five-year contract for a club record fee, the Premier League side said on Thursday.

Watford did not disclose the transfer fee but French media reported it was in the region of 32 million pounds ($38.79 million), eclipsing the 18.5 million pounds they paid for forward Andre Gray in 2017.

"The Hornets have beaten off strong competition to secure the services of the 21-year-old winger from Rennes, who has agreed a five-year contract with the Hornets."

He is Watford's third senior recruit of the close season after they signed striker Danny Welbeck and centre back Craig Dawson.

Watford, who finished 11th under Javi Gracia last season, begin their league campaign on Saturday when they host Brighton and Hove Albion.

Everton have signed France defender Djibril Sidibe on a season-long loan from AS Monaco, the Premier League club said on Wednesday.

Sidibe, 27, helped Monaco win the Ligue 1 title in 2017 and was a member of the France squad who won last year's World Cup.

"It is important to have different options in each position and with Djibril and Seamus (Coleman), we now have two high-quality right backs," Everton manager Marco Silva said.

Sidibe, who has played 18 times for his country, said it was an easy decision to make.

"Everton are recruiting with the intent to win trophies and play on the biggest stage. I am 100 per cent motivated and ready to help the club achieve its goals and to achieve my own individual goals," Sidibe told Everton TV.

© Copyright 2020 Reuters Limited. All rights reserved. Republication or redistribution of Reuters content, including by framing or similar means, is expressly prohibited without the prior written consent of Reuters. Reuters shall not be liable for any errors or delays in the content, or for any actions taken in reliance thereon.
Related News: Romelu Lukaku, Djibril Sidibe, Everton TV, Manchester United, Inter Milan
SHARE THIS STORYCOMMENT
Print this article