Luciano Spalletti has been named the new coach of Napoli, succeeding Gennaro Gattuso, the Serie A club confirmed on Saturday.

The vastly-experienced Spalletti left his last role with Inter Milan in 2019 and enjoyed his most successful spell in Italy at AS Roma, where he won back-to-back Coppa Italias in 2007 and 2008.

Gattuso's widely-expected departure was confirmed this week after Napoli failed to qualify for next season's Champions League following a final day draw at home to Hellas Verona.

"I am delighted to announce that Luciano Spalletti will become Napoli coach on 1 July," Napoli president Aurelio De Laurentiis said in a short statement. "Welcome, Luciano - we'll do great work together."

Gattuso, who has since taken over at fellow Serie A side Fiorentina, succeeded Carlo Ancelotti as Napoli coach in December 2019 and led them to Coppa Italia glory in 2020.

Although his departure was far from surprising following a reported breakdown in relationship with De Laurentiis, Gattuso has not discussed the matter recently as the club have imposed a media blackout since February.

Juventus, who sacked coach Andrea Pirlo after one season, have replaced him with Massimiliano Allegri, who returns to Turin for a second spell in charge at the club, the Serie A side said in a statement on Friday.

Pirlo was appointed last year with no previous coaching experience and could only lead reigning Serie A champions Juventus to fourth place this season.

Allegri, who won five Serie A titles in a row in his first spell in Turin between 2014 and 2019 as well as lifting the Coppa Italia four times and finishing as Champions League runners-up twice, returns to Juve having not coached since.

"For the courage, the dedication, the passion with which he demonstrated every day, our thanks go to the Maestro, the Coach and to Andrea, that really comes from the heart," Juventus said in a statement.

"Allegri finds a bench that he knows very well, a club that he loves and that loves him back, as today a new journey begins together, towards new goals.

"What he achieved in his first adventure at Juventus is engraved in the club's history. And now we are ready to begin again with Allegri, to build our future together."

Italy warmed up for the European Championship in style with a 7-0 thrashing of San Marino in a friendly on Friday.

Roberto Mancini's side struggled to break down the minnows early on in Sardinia, but captain Federico Bernardeschi hammered them into a 31st minute lead before Sassuolo defender Gian Marco Ferrari added a second three minutes later on his debut.

Matteo Politano fired home four minutes into the second half to make it 3-0 and Torino striker Andrea Belotti scored a well-taken fourth before Matteo Pessina netted a fifth moments later.

A brilliant volley from Politano and a close-range finish by Pessina late on sealed a seventh straight win for Italy.

Italy play one more warm-up match ahead of the June 11-July 11 Euro 2020 against Czech Republic next Friday in Bologna.

The Italians play in the tournament's opening match against Turkey before facing Switzerland and Wales, all in Rome.

"The result was obvious, it was important to be aggressive and to play well with speed in our passing," Mancini told Rai Sport. "Some performances gave me something to think about (for the final Euros squad selection). I've some very good players."

The Azzurri coach gave some of the fringe members of his provisional 33-man Euro 2020 squad a chance to impress as he looks to cut his selection to 26 before the tournament, but Italy struggled to make any inroads in the opening half hour.

Bernardeschi's sixth goal for his country broke the deadlock as he scored with a powerful strike from the edge of the area before Ferrari capitalised on a goalkeeping error to fire home the second as Mancini's men eventually clicked into gear.

After the break, the floodgates opened as the defensive mistakes started to creep into San Marino's play.

Politano's first goal came about due to a defensive slip, before Belotti’s 12th Italy strike extended the advantage.

After Pessina's fifth, his first goal for his country, Politano became the second-ever Napoli player to score a double for Italy. Pessina then capped a night to remember for the Atalanta midfielder with his second.

Italy are now unbeaten in 26 matches under Mancini, the country's second longest run without losing, one ahead of Marcelo Lippi and only behind the great Vittorio Pozzo, whose side did not lose in 30 games between 1935 and 1939.

Rodriguez out of Colombia squad for Copa America

James Rodriguez criticised the Colombian Football Federation on Friday after being cut from the squad for the Copa America and two World Cup qualifiers in June, with the Everton midfielder saying he would be fit enough to play in the tournament.

The federation earlier said Rodriguez was "not at the optimum level of competition" and would not join coach Reinaldo Rueda’s squad either for the Copa America that starts on June 13 or the Qatar 2022 qualifiers away in Peru on June 3 and at home to Argentina five days later.

Rodriguez, however, said that while he may not be at full fitness for the Peru game he would be fit to face Argentina and "of course ready for the Copa America".

"It was with surprise that I received the statement from the backroom team saying they would not be able to count on me and wishing me a speedy recovery," Rodriguez said.

"I have already recovered and sacrificed a lot."

"It filled me with great disappointment," he added. "Not having the confidence of the technical staff causes me a huge sadness."

The federation's statement did not specify what the injury was, but the Everton player has missed several games this season with a calf problem.

Colombia were meant to co-host the Copa America with Argentina but civil unrest there prompted the South American Football Confederation to remove them as joint hosts.

No decision has been taken on where to play the 15 games that were scheduled for Colombia.

Austria international David Alaba has signed for Real Madrid, the La Liga side said on Friday, joining as a free agent after spending more than a decade with Bayern Munich.

The versatile 28-year-old defender has agreed a five-year contract and will be presented after the European Championship which runs until July 11, Real said in a statement.

Alaba is the club's first signing for the next campaign after a disappointing season in which they lost out on the Liga title to neighbours Atletico Madrid and were beaten in the Champions League semi-finals by Chelsea.

Zinedine Zidane resigned as Real coach on Thursday after the club's first trophyless campaign in 11 years.

Alaba made 431 appearances for Bayern in all competitions, scoring 33 goals and providing 55 assists while amassing a sizeable trophy collection including 10 Bundesliga titles, six German Cups plus two Champions League crowns.

Primarily a centre back, Alaba could be Real's most influential defender for the next few years as captain Sergio Ramos is about to end his contract with the club and media reports say Raphael Varane could also depart.

The Austrian can also provide cover for left back Ferland Mendy or be used in central midfield should Real's next coach wish to relieve the strain on Casemiro, who has got used to playing practically every game in the last few seasons.

Alaba, who joined Bayern's youth set-up in 2008 and made his Bundesliga debut in 2010, revealed he was leaving the club back in February, saying he "had decided to do something new".

Bayern withdrew a contract offer for Alaba in November after talks dragged on for months over the player’s annual salary.

Yuya Osako's five-goal haul helped Japan to a 10-0 rout of Myanmar on Friday that sealed the Samurai Blues' place in the next phase of Asia's qualifying tournament for the 2022 World Cup in Qatar.

Japan's victory, their sixth straight in qualifying for next year's finals, means they cannot be knocked off the top of Group F and will take one of the 12 places available in the third round of the continent's qualifying competition.

The game was originally scheduled to be played in March, but was postponed amid a deadly crackdown by Myanmar's military on nationwide anti-coup protests.

As the Myanmar national anthem was played, none of the country's players appeared to sing and several squad members lowered their heads. One player made a three-finger gesture that symbolises the pro-democracy movement's defiance.

About 30 protesters gathered outside the Fukuda Denshi Arena holding placards saying: "Myanmar's soccer team does not represent its citizens."

On the pitch, Japan made light work of Antoine Hey's side, with Takumi Minamino opening the scoring early before Osako went on a spree that gave the home side a comfortable win.

Minamino's deft finish from close range in the eighth minute finished off an incisive move by the Japanese that highlighted the gulf in class between the teams.

Osako headed in the second after Yuto Nagatomo's overlapping run and cross, and the Werder Bremen striker added Japan's third from the penalty spot after Hiroki Sakai had been upended.

The 31-year-old completed his hat-trick before halftime when he stabbed in Nagatomo's downward header.

There was no let-up from Japan in the second half as Osako poked home Minamino's shot four minutes after the restart and Hidemasa Morita added a sixth.

A diving header gave Osako his fifth of the night and another headed effort from Ko Itakura in stoppage-time completed the rout.

Soccer's law-making body said on Friday competition organisers will have the option of allowing teams to continue using up to five substitutes per game until the end of 2022.

The temporary rule was first introduced in May 2020 in response to the COVID-19 pandemic to allow teams to use five substitutes, instead of the standard three, to support player welfare amid a congested fixture schedule.

The International Football Association Board (IFAB) said the temporary amendment will remain in place until December 31, 2022, "for all top-level competitions", with its implementation at the discretion of individual competition organisers.

"The decision follows a global analysis of the ongoing impact of COVID-19 on football, as well as representations from several key stakeholders from across the football community," IFAB said in a statement.

"The temporary amendment is aimed at supporting player welfare, in particular where schedules have been disrupted, often leading to competitions being played in a condensed period."

Top European leagues and UEFA's major competitions adopted the rule after the 2019-20 season was extended into July and August, respectively, due to the pandemic.

However, the Premier League was the only top league in Europe to revert to a maximum of three substitutes in a condensed 2020-21 season, even as managers such as Juergen Klopp and Pep Guardiola voiced concerns about player fatigue.

© Copyright 2021 Reuters Limited. All rights reserved. Republication or redistribution of Reuters content, including by framing or similar means, is expressly prohibited without the prior written consent of Reuters. Reuters shall not be liable for any errors or delays in the content, or for any actions taken in reliance thereon.
Related News: Napoli, Yuya Osako, Massimiliano Allegri, International Football Association Board, Real
COMMENT
Print this article 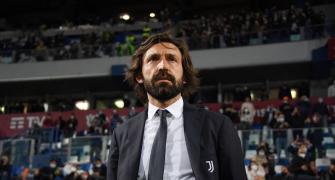