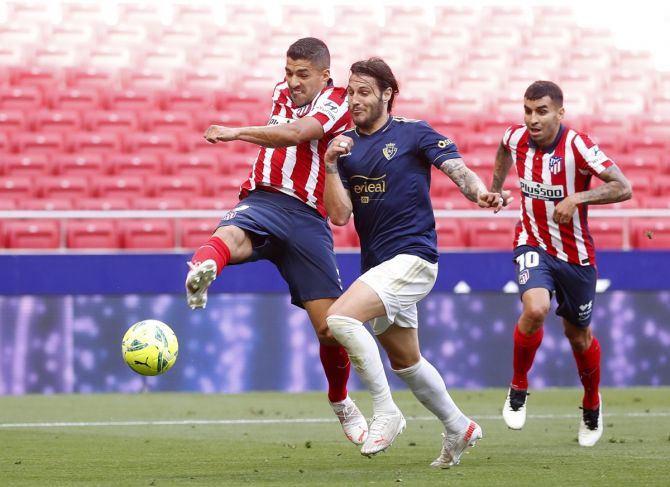 Atletico Madrid took a giant step towards the La Liga title in dramatic circumstances by fighting their way back to beat Osasuna 2-1 at home on Sunday thanks to a late strike from Luis Suarez.

Atletico dominated the game and hit the woodwork twice in the first half before having two goals ruled out for offside but fell behind in the 76th minute when a bullet header from Ante Budimir crossed the line before Jan Oblak could punch it away.

Atletico hit back with an emphatic finish from substitute Renan Lodi in the 82nd minute while top scorer Suarez completed the comeback by firing home from inside the area in the 88th, netting for the first time in six matches.

Diego Simeone's side nearly conceded an equaliser deep into added time though when Chimy Avila caught sight of goal but Oblak got across to parry before grabbing the ball with both hands.

The victory took Atletico on to 83 points after 37 games, two ahead of second-placed Real Madrid who won 1-0 at Athletic Bilbao.

Atletico visit relegation-fighting Real Valladolid on the final day of the season next Sunday knowing victory will deliver them a first title since 2014. Real, meanwhile, will host Villarreal.

"It was a moment of pure happiness," Suarez said of his winner.

"We didn't deserve to suffer like we did, it was one of our best first-half performances of the season but we missed so many chances, me more than anyone. But to win La Liga you have to suffer and that's what we had to do today."

Suarez also admitted his side had been trying to keep up with events in Bilbao and that their nerves nearly got the better of them.

"In the water break we heard Real were winning and sometimes the tension gets the better of you but we kept our patience and kept on creating chances," he added.

"Now we have to win at Valladolid in the most important game of the season."

Atletico knew before kick off they would clinch the title with a victory if neighbours Real failed to win in Bilbao and several thousand fans flocked to the Wanda Metropolitano even though they were not allowed in due to coronavirus restrictions.

As they had done in Wednesday's 2-1 win over Real Sociedad, Atletico came flying out of the blocks in search of a goal.

Atletico's first clear chance fell to Suarez but the Uruguayan scuffed his shot inside the area and Herrera saved well. Suarez then wasted an even more glaring effort, hitting the post from only a few metres out with Herrera beaten.

Saul Niguez then also hit the post shortly before halftime with a long range effort.

Atletico managed to find the net in the second half when Stefan Savic knocked in a free kick but the goal was ruled out for offside while Carrasco also netted a few minutes later only to have his effort chalked off.

The title looked to be slipping from Atletico's fingers when Croatian forward Budimir beat Oblak, just as Real took the lead in Bilbao.

But Simeone's side responded perfectly with two goals in the space of six minutes to stay in charge of their own destiny.

"We had a lot of chances but we weren't clinical until they went ahead and it was only then when we responded," said Simeone.

"When we had the most chances we had least composure and when we had only a couple opportunities left that was when we were most clinical."

PSG cling on to title hopes as leaders Lille held Paris St Germain clung on to their hopes of winning a fourth consecutive Ligue 1 title with a 4-0 home win against 10-man Stade de Reims as Lille's lead was cut to a single point with one game remaining on Sunday.

As PSG cruised to a routine victory, Lille, who have 80 points, were held to a goalless draw by mid-table St Etienne and now need a win at Angers in the final round to guarantee them a first title since 2011.

Monaco stayed third on 77 points, one win away from guaranteeing a Champions League spot, as goals by Wissam Ben Yedder and Aleksandr Golovin earned them a 2-1 home victory against Stade Rennais.

They lead fourth-placed Olympique Lyonnais, in the first of two Europa League spots, by one point after Rudi Garcia's team secured a 5-2 win at Nimes thanks to a double by Lucas Paqueta and goals by Memphis Depay, Houssem Aouar and Islam Slimani.

Second-from-bottom Nimes were relegated to Ligue 2.

Six teams -- Reims, Bordeaux, Racing Strasbourg, Brest, Lorient and Nantes - are separated by two points and will battle to avoid finishing 18th, which would mean taking part in a relegation playoff.

Olympique Marseille, on 59 points, occupy the other Europa League spot in fifth place as Arkadiusz Milik's hat-trick gave them a 3-2 win against Angers, while RC Lens (56) are sixth following a 3-0 loss at Girondins de Bordeaux.

At the Parc des Princes, PSG were never troubled by a Reims side who played most of the game with 10 men in a warm-up before Wednesday's French Cup final against Monaco.

Neymar converted a penalty in the 13th minute after Yunis Abdelhamid handled the ball in the area and picked up a straight red card in the process.

Kylian Mbappe doubled the advantage in the 24th, firing home from a terrible clearance by Thomas Foket.

Marquinhos added a third with a downward header on 68 minutes and Moise Kean netted a fourth from just inside the box.

Lille lacked inspiration against a sturdy St Etienne side and missed out on securing a victory that would have allowed them to head into the final round needing only a draw when Yusuf Yazici's free kick crashed onto the far post in the last minute.

"The way St Etienne played today, I had never seen them play like this but it is what it is, it was up to us to be better," said Lille captain Jose Fonte.

"We're now going to focus on next Sunday to win that final."

AC Milan squandered the chance to secure a long-awaited return to the Champions League as goalkeeper Gianluigi Donnarumma came to their rescue in a 0-0 Serie A draw at home to Cagliari on Sunday.

Victory over the 16th-placed Sardinians would have assured Milan of a top-four finish and their first appearance in European football's top club competition since 2013-14 next season.

But Stefano Pioli's side toiled to a disappointing draw that leaves them third on 76 points going into the final round, level with Napoli in fourth but above them on head-to-head record, and one point ahead of fifth-placed Juventus.

The hosts were limited to speculative long-range efforts in the first half and risked going behind after the break, but Donnarumma produced top saves to deny Leonardo Pavoletti and Diego Godin headers.

Cagliari, on 37 points, celebrated the security of their Serie A status before kick-off after 18th-placed Benevento drew with Crotone.

Milan travel to second-placed Atalanta for their final game of the season next Sunday, while Napoli host 10th-placed Hellas Verona and Juventus go to Bologna, who are 11th.

The hosts were without injured top scorer Zlatan Ibrahimovic but came into the game in good form after comfortably beating Torino and Juventus over the last week.

They received another boost when Benevento’s draw with Crotone meant Cagliari’s safety was secured and the visitors would not be fighting for their lives at San Siro.

But Milan put in a sluggish display and created few chances of note. Alexis Saelemaekers' driven shot required a smart save from Alessio Cragno and Davide Calabria drilled a long-range effort wide in the first half.

Donnarumma kept the score level after the break, using his legs to block a Pavoletti header from six yards before flying to his right to claw away Godin’s headed effort with his right hand.

Pioli turned to his bench to try and find a spark and Samu Castillejo was the liveliest of the replacements. However, the Spaniard, like his team mates, struggled for accuracy as he was off target with two efforts before a stoppage-time volley was deflected over off Godin's head.