Images from football matches played in Europe on Friday 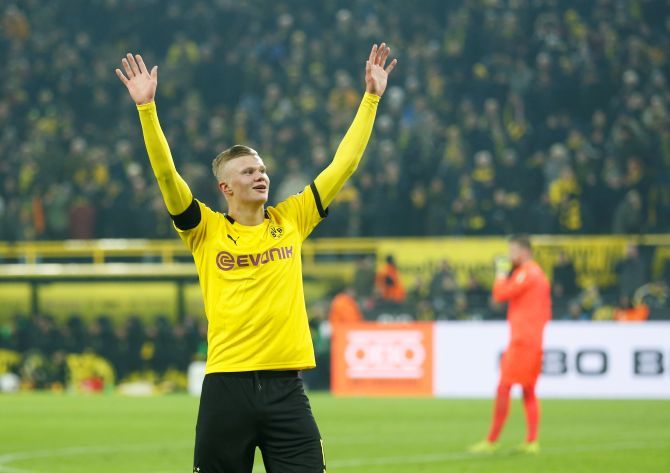 Borussia Dortmund teenager Erling Haaland followed up his debut hat-trick by scoring two more goals, again off the bench, in a 5-1 demolition of Cologne in the Bundesliga on Friday.

Haaland scripted history as he became the first player to score five goals in his first two matches in Bundesliga.

Fellow 19-year-old Jadon Sancho was also on target with his 11th Bundesliga goal of the season and his eighth in his last eight outings as Dortmund outclassed the hapless Billy Goats.

Raphael Guerreiro and Marco Reus scored first-half goals as the third-placed hosts cut the gap to RB Leipzig to four points before the leaders visit Eintracht Frankfurt on Saturday.

Haaland, the first player ever to score five goals in his first two Bundesliga appearances, has come on in the second half both times and spent a total of 59 minutes on the pitch.

He scored 28 goals in 22 games for Austrian side Salzburg in the first half of the season before joining Dortmund.

Both first-half goals came from long passes upfield from defender Mats Hummels, who also saw a header hit the bar.

The first goal, in the first minute, ended with Sancho crossing from the right for Guerreiro to score with a first-time shot which keeper Timo Horn got a foot to but could not stop.

For the second, Reus peeled away from the Cologne defence to latch onto Hummels's raking pass and steer the ball through Horn's legs. The goal was initially ruled out for offside but awarded after a VAR review.

In between, Dortmund were awarded a penalty for a foul on Achraf Hakimi by Sebastiaan Bornauw but, after a VAR review, the referee ruled it was outside the area and gave a free kick.

Sancho increased the lead three minutes after the re-start with a clinical finish from a Reus pass before Mark Uth pulled one back with a superb volley from a tight angle.

Haaland, who entered the fray in the 65th minute, got a poacher's goal when he turned in a rebound for the fourth in the 77th.

Ten minutes later, the prolific Norwegian raced onto a through ball, slipped past Horn and rolled the ball into the net from the narrowest of angles before milking the applause from the Suedtribune.

Champions Bayern Munich, who are level on 36 points with Dortmund, host Schalke in Saturday's late game. 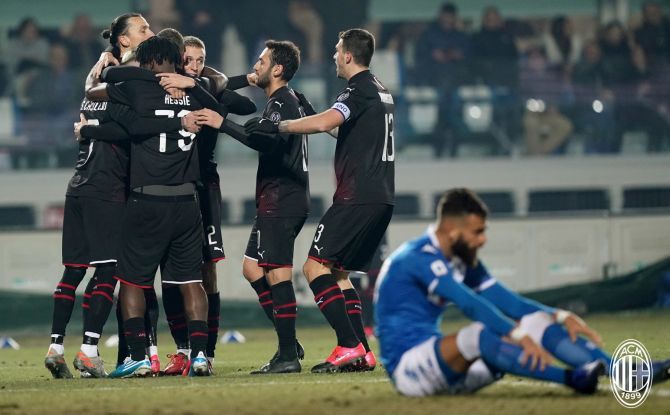 IMAGE: AC Milan players celebrate after scoring against Brescia in their Serie A match at San Siro on Friday.. Photograph: AC Milan/Twitter

AC Milan forward Ante Rebic scored the winner for the second week running as they beat Brescia 1-0 away in Serie A on Friday, sparing the blushes of Zlatan Ibrahimovic after an extraordinary miss by the 38-year-old.

Ibrahimovic had only to tap the ball in from six metres after Theo Hernandez sent in a low cross in the 40th minute but the Swede instead contrived to shoot wide, his only excuse being that the ball might have been slightly behind him.

He made amends by setting up the winning goal in the 71st minute. Ibrahimovic pulled the ball back from the byline and, after a scramble in the area, Rebic turned it from close range.

In between, Milan goalkeeper Gianluigi Donnarumma made a series of saves to keep his side in the match.

The win continued a mini-revival for Milan, who are unbeaten in five games in all competitions since Ibrahimovic returned for a second stint at the club on a six-month contract in January.

"We are a completely different team from the one who started the season," said coach Stefano Pioli. "Technically, we can do better but we have a great attitude, we know how to suffer and pull a winning goal out of the hat.

"Ibrahimovic has only scored one goal but with him on the pitch we have managed four wins and a draw (in all competitions since he joined) because he is an added value thanks to his presence and quality."

The win took Milan up to sixth with 31 points from 21 games.

Brescia, stuck in the relegation zone with 15 points, were missing forward Mario Balotelli who began a two-match suspension after he was sent off for insulting the referee in a 2-2 draw with Cagliari on Sunday.