Hazard off the mark 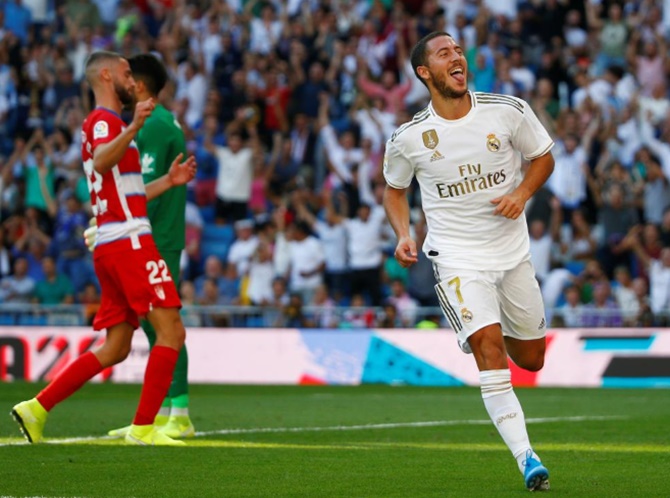 Eden Hazard finally scored his first goal for Real Madrid as his side beat second-placed Granada 4-2 in a highly entertaining game at the Santiago Bernabeu on Saturday to go four points clear at the top of La Liga.

Goals from Hazard, Karim Benzema and a stunning long-distance hit from Luka Modric gave Real a comfortable three-goal lead but a Darwin Machis penalty and a close-range strike from Domingos Duarte had the home fans dreading a late collapse.

Substitute James Rodriguez sealed the win with a goal in stoppage time, taking Real on to 18 points after eight games, while Granada are second on 14.

Madrid defender Dani Carvajal did not hide his unease about conceding the two late goals, which brought back memories of a nervy 3-2 win over Levante earlier this season.

“We can’t afford to suffer like that after leading 3-0, we need to correct this tendency. We got away with it today and against Levante but if we keep doing this we’re going to drop points,” he told reporters.

“It’s not a sign that we’re very reliable and we need to be more ruthless but whatever happens this weekend we’ll still be top.”

Third-placed Atletico Madrid could move to within a point of Real when they visit Real Valladolid on Sunday, while champions Barcelona, on 13 points, play at home to Sevilla on Sunday.

Despite leading the table and being unbeaten in La Liga, Real were under pressure after Tuesday’s sluggish 2-2 draw at home to Club Bruges in the Champions League.

They welcomed a Granada side who have taken the league by storm on their return to the top flight and had climbed into second spot thanks to a run of four wins in five games that included a 2-0 win over Barcelona.

Real were missing Marcelo, Ferland Mendy and Nacho so Carvajal had to deputise at left back, while goalkeeper Alphonse Areola came in for Thibaut Courtois, who was absent with illness and had been heavily criticised for his display against Bruges.

Zinedine Zidane’s side got off to the ideal start, however, when Benzema knocked in an incisive pass from Gareth Bale in the second minute.

Hazard then scored for the first time since his 100-million-euro ($109.76 million) move from Chelsea to Real, lobbing over Granada keeper Rui Silva at the end of the first half.

The Belgian turned provider for Real’s third goal, cutting in from the left wing and laying off the ball for Modric to drill into the top corner in the 61st minute.

Granada struck back in the 69th when Machis scored a penalty after a foul following a clumsy piece of goalkeeping from Areola, and they reduced the deficit to one goal with a close-range strike by Duarte following a corner.

The Andalusians could not threaten Real in the remaining minutes though and Benzema missed a chance to ease their nerves before Rodriguez finally sealed victory. 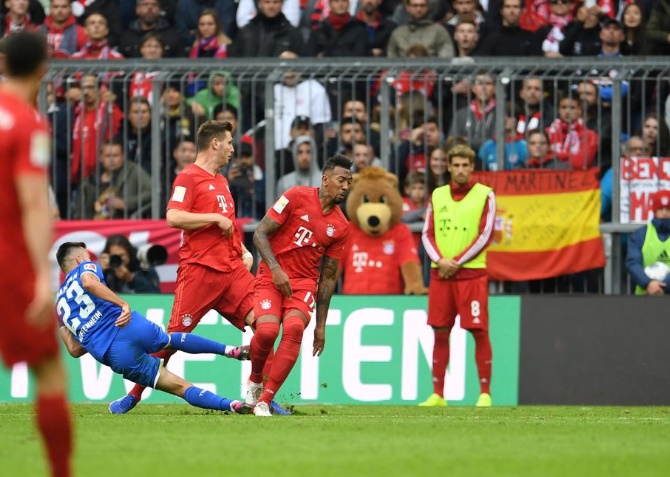 The 26-year-old Armenian striker scored either side of a Robert Lewandowski goal as Bayern suffered their first league loss and crashed back down to reality four days after their 7-2 demolition of Tottenham Hotspur in London in the Champions League.

Bayern’s first home defeat in 12 months left the title race wide open with Bayern remaining on top with 14 points, ahead on goal difference of Freiburg, who drew 2-2 with Borussia Dortmund, and RB Leipzig and Bayer Leverkusen, who drew 1-1.

Schalke 04 conceded a stoppage-time equaliser through Jonas Hector to draw 1-1 with Cologne and miss the chance to go top of the table. Schalke, who ended a four-game winning streak in the league, are also on 14 points.

Borussia Moenchengladbach, on 13, take on Augsburg on Sunday and will go top with a win.

Hoffenheim had a golden chance after four minutes in Munich but Adamyan, who joined this season from second division Regensburg, hesitated in his one-on-one with keeper Manuel Neuer to allow Jerome Boateng to clear at the last moment.

Bayern did not come near their midweek European form and apart from some good chances in the first half never showed the kind of clinical finish that saw them fire seven goal past Tottenham.

Adamyan made amends in the 54th minute when he fired in from a tight angle to surprise Neuer after Corentin Tolisso had lost possession in his own half.

Lewandowski grabbed his 11th goal of the campaign with a well-timed header after Bayern upped the pressure in search of an equaliser.

Adamyan, however, crowned his first start for Hoffenheim with his second Bundesliga goal in the 79th, beating Neuer once more with a low shot, to give his team their first win in Munich and their first three points since late August.

Schalke thought they had won their game when Suat Serdar nodded in at the far post in the 75th minute but, like their Ruhr valley rivals Dortmund earlier on Saturday, they failed to hang on to their lead.

Schalke’s Guido Burgstaller hit the post in the 88th but it was Cologne who scored with Hector’s header in stoppage time for a deserved equaliser. Hector had earlier almost scored an own goal, heading a clearance on to the post.

Sarabia on fire as PSG recruits shine in Angers win 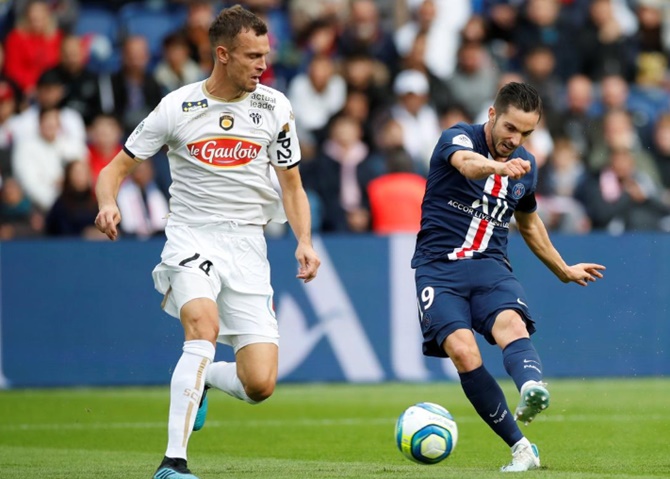 Paris St Germain’s new recruits continued their smooth integration as Pablo Sarabia scored one goal and set up two more in a 4-0 home win over Angers that stretched the champions’ Ligue 1 lead to five points on Saturday.

Sarabia was the first on target at the Parc des Princes with Mauro Icardi and Idrissa Gueye, who also joined PSG during the close season, adding goals to put Thomas Tuchel’s side on 21 points from nine games.

Neymar produced a convincing display, freeing up space for his new team mates to shine in the absence of the injured Kylian Mbappe and Edinson Cavani, and the Brazilian forward wrapped it up in the final minute with a deserved goal.

Angel Di Maria did not start either as coach Tuchel kept him on the bench until the closing stages but PSG were quickly into action.

Sarabia burst into the area, cut inside and beat Ludovic Butelle with a low shot to put the hosts ahead after 13 minutes.

Angers had a good opportunity at the half hour, only for Keylor Navas to box away Baptiste Santamaria’s fierce long-range strike.

PSG were just more efficient and eight minutes from the break, Icardi whipped the ball into the roof of the net from a fine Sarabia back pass for his first goal in Ligue 1.

It was the Spaniard’s second consecutive assist for Icardi after he had set up the Argentine in PSG’s 1-0 win at Galatasaray in the Champions League on Tuesday.

Sarabia was decisive again in the 59th minute when Gueye connected with his failed attempt to fire home from close range.

PSG have won all their eight games with Gueye on the field without conceding a goal and the Senegal midfielder looks to be the player the capital side have needed since Blaise Matuidi left for Juventus in 2017.

Neymar’s accelerations and brilliant turns tormented the Angers defence but Butelle kept him at bay on three occasions.

The Brazilian was however rewarded for his efforts in the last minute with a goal from close range, his fourth this season, after he collected a through ball from Eric Choupo-Moting.

Former Everton midfielder Gueye said his team were eager to shine after scoring only three goals in their previous four league games. 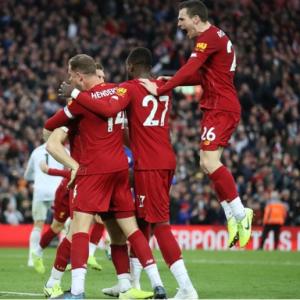 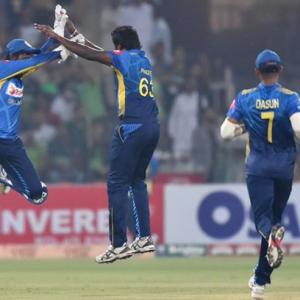