Paris St Germain’s Pablo Sarabia scored twice as they hammered Dijon 6-1 to reach the French Cup semi-finals where they will be joined by Olympique Lyonnais, who beat Olympique de Marseille 1-0 on Wednesday.

Lying 17th in Ligue 1, hosts Dijon were facing an uphill struggle when Wesley Lautoa turned the ball into his own net in the first minute, but Mounir Chouiar got his side back on level terms 12 minutes later.

League leaders PSG illustrated the gulf in class towards the end of the first half as Kylian Mbappe restored their advantage, and defender Thiago Silva struck a third five minutes into the second half.

Spaniard Sarabia increased PSG’s lead in the 56th minute as the home side’s challenge fell apart, and Dijon defender Senou Coulibaly scored another own goal in the 86th minute before a stoppage-time Sarabia effort completed the rout.

Lyon struggled for long periods at home to Marseille and the game looked like it might be heading for extra time when Moussa Dembele’s 70th-minute penalty was saved by Marseille keeper Yohann Pele.

Yet with nine minutes left Houssem Aouar collected a reverse pass on the right-hand side of the penalty area before firing home to give the hosts the lead, which they managed to hold despite a late assault by Marseille.

Lyon and PSG join Stade Rennais in the semi-finals, while St Etienne face amateur fourth-division side Epinal in the last quarter-final on Thursday. A stunning goal from Spanish midfielder Fabian Ruiz gave Napoli a 1-0 win at Inter Milan in the first leg of their Coppa Italia semi-final after the visitors dominated a cagey game at the San Siro on Wednesday.

Ruiz curled a delightful left-foot shot past Inter goalkeeper Daniele Padelli in the 57th minute after a one-two with right back Giovanni Di Lorenzo.

Inter lacked energy after Sunday’s spectacular 4-2 comeback win against bitter city foes AC Milan in their league derby and Napoli bossed the midfield in the first half.

Dries Mertens fired over the bar with a first-time shot in the 16th minute and the visitors also came close on the stroke of halftime as Padelli denied Piotr Zielinski.

However, Padelli was powerless when Ruiz unleashed a sublime effort which left the keeper clutching thin air.

A weary-looking Inter threw men forward in the closing stages but Napoli held out comfortably to gain the upper hand ahead of the return leg on March 5.

The home side missed their best chance to salvage a draw in stoppage time, when Napoli goalkeeper David Ospina smothered a close-range shot by substitute Danilo D’Ambrosio.

AC Milan host Juventus in the first leg of the other semi-final on Thursday, with the return scheduled for March 4.

Athletic Bilbao dominated Granada in the Copa del Rey semi-final first leg but were only able to earn a 1-0 win on Wednesday thanks to a goal by Iker Muniain.

The Basques, who knocked out Barcelona in the quarter-finals, impressed at a raucous San Mames and had two goals disallowed for offside.

Inaki Williams had a low shot tipped round the post by Rui Silva and Raul Garcia was narrowly off target, before Muniain put Athletic ahead after 42 minutes.

Yeray Alvarez and Ander Capa’s strikes were ruled out as Athletic failed to build on their lead before the second leg in Andalusia on March 5.

“We feel good, to win at home and keep a clean sheet was very important, it’s a good result for the second leg. We’d have liked to expand the scoreline,” Muniain said.

“Apart from that we had a good game, played intensely, at a good rhythm and we got a favourable result and we are happy.”

Athletic spurned early chances before the electric Williams broke down the left flank and drove a low ball across for Muniain to convert from close range.

The hosts’ domination continued after the break and Williams lashed over, while Yeray’s effort was ruled out because he and several other Athletic players were offside after a free kick.

Capa thought he had netted the second, only for it be disallowed after VAR referral, because Williams was offside and blocking the goalkeeper’s view.

Athletic have won the tournament 23 times, more than any side except Barcelona, and are favourites to reach their 38th final.

Real Sociedad host second-tier Mirandes on Thursday in the other semi-final first leg, with the return on March 4.

© Copyright 2022 Reuters Limited. All rights reserved. Republication or redistribution of Reuters content, including by framing or similar means, is expressly prohibited without the prior written consent of Reuters. Reuters shall not be liable for any errors or delays in the content, or for any actions taken in reliance thereon.
Related News: Napoli, Paris St Germain, Fabian Ruiz, Dijon, Iker Muniain
COMMENT
Print this article 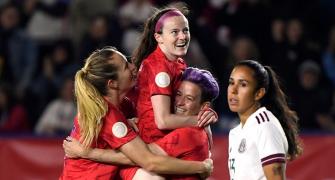