Barcelona conceded two embarrassing goals as they suffered a shock 2-1 defeat away to Cadiz in La Liga on Saturday.

The Catalans fell behind in the eighth minute when centre back Oscar Mingueza headed the ball towards his own goal and although keeper Marc-Andre ter Stegen got a hand to the ball, Cadiz forward Alvaro Gimenez helped it over the line.

Barca drew level with a fortuitous goal of their own in the 57th when Cadiz defender Pedro Alcala diverted a Jordi Alba cross into the net, flummoxing his impressive goalkeeper Jeremias Ledesma who had been keeping Barca at bay.

Cadiz restored their lead six minutes later, however, when Alvaro Negredo capitalised on a calamitous mix-up between Barca defenders Alba and Clement Lenglet following a throw-in.

Alba aimed the throw towards Lenglet but the Frenchman could not control the ball and Negredo, on the pitch for less than a minute, ran to press Ter Stegen, blocked his kick out and dribbled the ball past the diving Frenkie de Jong and into the unguarded net. 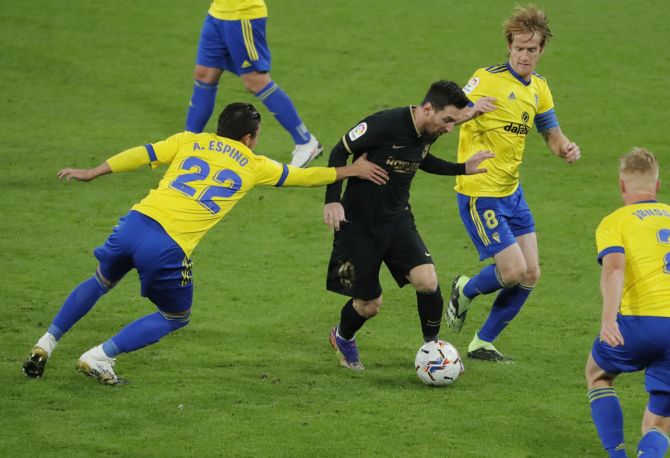 Barca's fourth defeat of the season left them seventh in the standings on 14 points after 10 games, 12 points behind leaders Atletico, and Ronald Koeman's side have failed to win their last four away matches.

The Dutch coach criticised the attitude of his players.

"It's incredible that we lost because of a goal like that, it's an error you do not expect this team to make. It shows we were not concentrating," he said.

"The attitude was not good tonight. I'm very disappointed."

Barca midfielder Sergio Busquets said individual errors had cost them a lot of points this season.

"You cannot question the team's attitude or commitment, but when you start like we did today it makes the game very difficult," he said.

Cadiz, who recorded their first home win since returning to the top flight, moved above them into fifth place on 18 points. The Andalusians also beat champions Real Madrid 1-0 away from home earlier in the campaign.

Barca captain Lionel Messi had a frustrating night despite being rested for the Champions League win at Ferencvaros in midweek and was repeatedly thwarted by fellow Argentine and Rosario native Ledesma in the Cadiz goal.

Ledesma also kept out a stinging shot from Miralem Pjanic late on and a close-range effort from Antoine Griezmann.

Cadiz should have put the game out of Barca's reach when Bobby Adekanye raced towards goal unchallenged but failed to beat Ter Stegen.

However, their defence stood tall and they pulled off another huge win in their first season back in the top flight for 14 years. Real Madrid earned a scrappy 1-0 victory at Sevilla on Saturday, thanks to an own goal from keeper Bono, to snap a three-game winless run in La Liga and ease the pressure on coach Zinedine Zidane.

Madrid were in desperate need of victory after defeats by Alaves in La Liga and Shakhtar Donetsk in the Champions League and the win lifted them to third in the standings on 20 points, leaving Sevilla fifth on 16.

The only goal in a cagey game came in the 56th minute when Bono attempted to claim a low cross from Ferland Mendy towards Vinicius Jr. but completely missed the ball, which bounced off his leg and trickled into the net.

Brazilian forward Vinicius missed a chance to put Madrid further at ease later in the game but lost control of the ball, provoking an angry reaction from strike partner Karim Benzema.

After the goal, Sevilla dominated the game and nearly equalised with a free kick from Nemanja Gudelj which brushed the side netting, a curling strike from Suso which just missed the top corner and an acrobatic effort from Lucas Ocampos which Thibaut Courtois tipped away.

Madrid saw out the game to get their first league victory since October, after losing to Valencia, drawing with Villarreal and losing at home to Alaves.

They face a crucial game at home to Borussia Moenchengladbach on Wednesday, with their place in the Champions League knockout stage on the line, and then host city rivals Atletico Madrid.

"The victory was very important for our confidence," said Vinicius.

"We had played well in the other games but the victory never came but we didn't have any doubts and we went out to win the match.

"We know the pressure we are under but we like it and we know how to keep our heads." Daichi Kamada gave the hosts a ninth-minute lead but, despite missing leading scorer Erling Haaland with a hamstring injury, Dortmund took control after halftime and U.S. midfielder Reyna levelled with the second Bundesliga goal of his career.

Dortmund, who had not drawn in their previous 27 league games, are third with 19 points from 10 games ahead of the top-of-the-table clash between leaders Bayern Munich (22) and RB Leipzig (20) later on Saturday.

Eintracht, without a win in eight games in all competitions, are eighth with 13 points.

The home side made an impressive start and had already gone close twice before Martin Hinteregger released Kamada and the Japanese forward controlled the ball with his first touch and beat goalkeeper Roman Buerki with a deft finish.

After Jadon Sancho twice went close for Dortmund, Frankfurt should have gone further ahead when the ball fell to Aymen Barkok but he fired wildly over the bar from close range.

Dortmund, who have scored 19 of their 22 league goals this season in the second period, brought on 16-year-old Youssoufa Moukoko at halftime and levelled within 11 minutes of the restart.

Reyna collected Sancho's pass, skipped past Hinteregger's challenge and fired an unstoppable shot between Kevin Trapp and his near post.

Moukoko, making his third Bundesliga appearance, saw another effort saved by Trapp although both teams ran out of steam towards the end.

Manuel Prietl and Ritsu Doan nabbed first-half goals for Arminia Bielefeld as they grabbed a much-needed 2-1 win over fellow strugglers Mainz 05 in their Bundesliga clash on Saturday.

The home side took the lead when Prietl scored with a deflected shot in the 21st minute, and the Mainz defence sprang another leak 10 minutes later when it allowed Japanese midfielder Doan to pick up the ball and advance through the middle before firing home from outside the box to make it 2-0.

Mainz mounted a late fightback and substitute Kevin Stoeger pulled a goal back in the 82nd minute, stabbing home a pass from Jean-Paul Boetius after his initial effort had been blocked, but despite a late barrage they could not find an equaliser.

With their second win of the season Bielefeld rose above Mainz in the table to 16th spot with seven points after 10 games, leaving Mainz two points further back. Schalke 04 are bottom with three points after nine games.

Borussia Moenchengladbach forward Alassane Plea blasted in a second-half equaliser to secure a 2-2 draw against Freiburg in an entertaining Bundesliga clash at the Schwarzwald Stadium on Saturday.

Plea's superb effort from distance came almost immediately after Italian winger Vincenzo Grifo had fired in a penalty awarded to hosts Freiburg for a foul on Lucas Hoeler to make it 2-1 in the 49th minute.

The visitors made a strong start in a league fixture that has not ended in favour of the away side since Gladbach won 1-0 at this stadium in 2002.

Swiss striker Breel Embolo gave them the lead in the 23rd minute with a left-foot finish for his first league goal of the season after Hoeler hit the post at the other end.

Gladbach goalkeeper Yann Sommer produced a fine save to deny Grifo, but Freiburg made it 1-1 from the resulting corner when Philipp Lienhart headed in from point-blank range after an overhead kick from Baptiste Santamaria.

Freiburg pushed for victory and were unlucky as Grifo hit the post in the dying seconds and substitute Nils Petersen failed to finish from close range, before Sommer made a reflex save to deny Lienhart.

Gladbach remained seventh in the standings with 16 points from 10 games and Freiburg are seven places below them with eight points.

Marco Rose's Gladbach will travel to Real Madrid for a Champions League clash on Wednesday and can qualify for the last 16 from Group B if they avoid defeat or Shakhtar Donetsk draw with Inter Milan.

Lazio cling on for 2-1 win at gallant Spezia

Lazio put their Serie A campaign back on track with a 2-1 win at gallant Spezia on Saturday, although they rode their luck as the hosts twice hit the woodwork.

First half goals from Ciro Immobile and Sergej Milinkovic-Savic gave Lazio the points against the Serie A newcomers as they bounced back from last Sunday's 3-1 home loss to Udinese.

Spezia, forced to play home matches 300-km away in Cesena as their own ground is not yet ready for top flight matches, nearly went ahead in the third minute when Nahuel Estevez's shot was tipped onto the crossbar by goalkeeper Pepe Reina.

But they were hit on the counter-attack after 15 minutes as Milinkovic-Savic won possession, released Immobile and last season's Serie A top scorer sent his shot between Ivan Provedel's legs.

Simone Bastoni hit the bar for Spezia before Milinkovic-Savic curled home a free kick in the 33rd minute for Lazio's second.

Spezia launched a full-scale offensive after halftime and M'Bala Nzola pulled one back, cutting inside to score with a left-foot shot in the 64th minute.

But, despite incessant pressure, Lazio held out to move into seventh spot, level with champions Juventus, Napoli and AS Roma on 17 points albeit having played a game more.

© Copyright 2021 Reuters Limited. All rights reserved. Republication or redistribution of Reuters content, including by framing or similar means, is expressly prohibited without the prior written consent of Reuters. Reuters shall not be liable for any errors or delays in the content, or for any actions taken in reliance thereon.
Related News: Mainz, Dortmund, Giovanni Reyna, Freiburg, Real Madrid
SHARE THIS STORYCOMMENT
Print this article 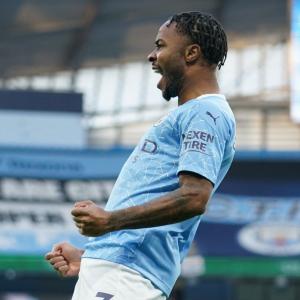