Real Madrid’s unbeaten start to the La Liga season came to an abrupt and surprising end as Real Mallorca claimed a stunning 1-0 victory at a rocking Son Moix on Saturday to climb out of the relegation zone.

The Balearic Islanders had only managed six goals in their opening eight games of their first season back in the big time, but one was enough to down their illustrious visitors.

It was a cracker too, thrashed home in the seventh minute by Ivorian Lago Junior who with one swing of his right foot wrote his name into Mallorcan sporting folklore alongside tennis great Rafael Nadal, who celebrated his wedding earlier.

Local boy Nadal is a Real Madrid fan but surely would have raised a glass in honour of Lago Junior and the fighting spirit of a team written off a relegation fodder before the season.

Real Madrid, 5-0 winners on their most recent trip to the island in 2012, were without several big names including Luka Modric, Gareth Bale, Toni Kroos and Eden Hazard, but could have no complaints as they failed to function.

Defeat cost them the chance of reclaiming top spot from Barcelona who won earlier in the day and they will have to bounce back quickly with a crucial Champions League clash against Galatasaray on Tuesday having picked up only one point in their opening two matches.

A disgruntled Zidane refused to use the absentees as a reason for the loss.

“These players are injured, and we have others who are good too. But they must show that every time they play, that they have the level to play for Madrid. Today we didn’t,” he said.

“We must be more consistent if we are to do anything good this year, have more life in our play. Today we didn’t have that. “Our start to the game was very bad.

“In second half we did not create many clear chances, we lacked a bit of everything today.”

It was no smash and grab raid by Vicente Moreno’s Mallorca who produced a tenacious display full of energy to beat Real for the first time since 2006, sparking wild celebrations.

Moreno led Mallorca back to La Liga via the playoffs in June and after an opening day win they have found it tough.

But they backed up their win over Espanyol before the international break with a performance that will fuel belief they can survive.

Madrid began casually and were rocked when Lago Junior cut in from the left and lashed a right-footed shot across Thibaut Courtois and inside the far post.

The home fans were in delirium soon afterwards when top scorer Ante Budimir thought he had made it 2-0 by thumping a shot past Courtois but the goal was rightly ruled offside.

Karim Benzema struck the woodwork for Madrid before halftime with a half volley and Brazilian Vinicius Jr threatened with his pace, although there was no end product.

With James Rodríguez and Isco making little impact the expected second-half siege failed to materialise and Madrid played the last 15 minutes with 10 men after Alvaro Odriozola received a second yellow card for a reckless foul that summed up their night.

Mallorca held firm with relative ease for their third victory since returning to the top flight following a six-year absence. They moved up to 14th with 10 points while Real are second, one point behind Barcelona. Barcelona’s attacking trident of Lionel Messi, Luis Suarez and Antoine Griezmann all got on the score-sheet for the first time together in a 3-0 win away to Eibar which took the La Liga champions top of the table earlier on Saturday.

The Catalans lead the standings for the first time this season on 19 points after nine games.

Griezmann put Barca ahead in the 13th minute after a route-one move from his side as Clement Lenglet launched the ball from the heart of the defence down field to release the France forward, who calmly slotted inside the near post.

The three forwards all combined for the next two goals in a sign that the trio are finally gelling after a stop-start season interrupted by injuries to Messi and Suarez.

Suarez brought the ball into the area for Griezmann to slide it across for Messi to score in the 58th minute.

Griezmann was the architect of the third goal, rolling the ball from deep into the path of Messi, who then squared for Suarez to tap into an empty net in the 66th and round off Barca’s fifth consecutive victory in all competitions.

Barca coach Ernesto Valverde welcomed the superb performances of his three forwards, saying it was inevitable they would start dovetailing sooner or later. “It’s a question of time and games. In the end, the top players always end up playing well together and learn how they need to play to get the best out of each other,” he told reporters.

“They participated a lot and worked very well together and today we got what we deserved.”

Barca have 10 days until their next league game at home to Real Valladolid after next Saturday’s clash with Real Madrid was postponed over security concerns due to widespread violence across Catalonia following the jailing of separatist leaders.

“These three points are very valuable as after an international break it’s difficult to play well because everyone is tired from their trips but we played very well,” added Griezmann.

“We knew that they would press us high up the pitch so I told Clement if he saw down the wing to play me in, and he did that. We created a lot of chances from long passes today.”

Barca were without influential defender Gerard Pique due to suspension but France defender Samuel Umtiti gave a towering performance in his first start of the season after a series of knee problems.

“This was the best game we have played away from home both for the result and the performance,” added Lenglet.

“Eibar barely had any chances but we created a lot. It was a very complete performance from us from start to finish.”

There was one sour note for Ernesto Valverde’s side, however, as right back Sergi Roberto had to be taken off at the start of the second half with a suspected knee injury. 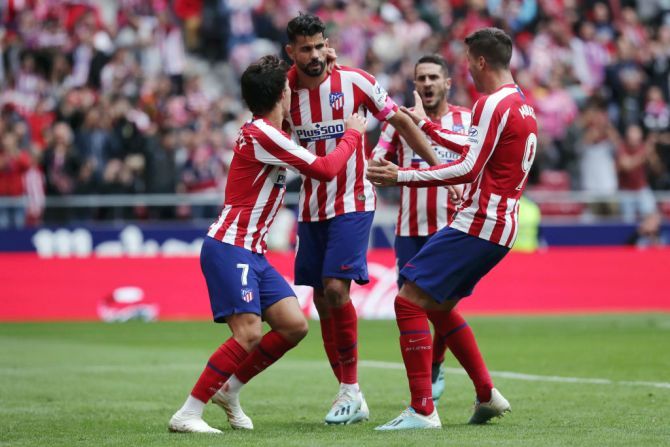 It had looked as if Diego Costa’s 36th-minute penalty would earn Diego Simeone’s misfiring side only their second win in six league games but they were unable to hold on.

Victory would have taken Atletico back into third spot but they lost ground on Barcelona who moved top earlier on Saturday with a 3-0 victory over Eibar.

Atletico dominated the first half but Costa and his strike partner Alvaro Morata both missed decent chances.

Costa broke the deadlock when Denis Cheryshev was adjudged by the referee, via a VAR check, to have blocked a cross with his arm and the striker sent Jasper Cillessen the wrong way with the resulting spot-kick for only his second goal of the season.

Valencia were more dangerous after the break and Russian striker Cheryshev spurned a great chance when he fired against the bar from close range.

There was an edginess in the Atletico ranks after Parejo’s dipping free kick in the 82nd minute gave keeper Jan Oblak no chance and Parejo soon went close to snatching the points for the visitors.

Atletico have 16 points from nine games, three more than Valencia.