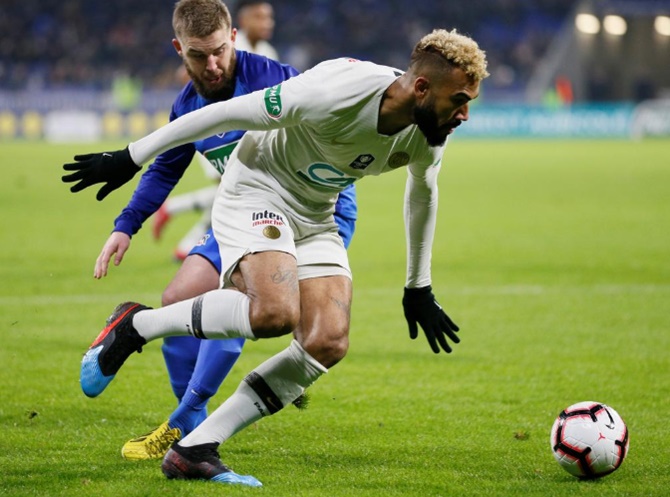 Eric Choupo-Moting scored his third Ligue 1 goal of the season on Sunday but the Paris St Germain forward's incredible miss later in the game was the moment that will be remembered from his performance in Sunday's 2-2 draw against Racing Strasbourg.

The Cameroon international put PSG ahead after 13 minutes at the Parc des Princes with a strike from inside the box but that goal was later overshadowed by a scramble that went viral on social media.

Christophe Nkunku's chip was on its way to the back of the net when Choupo-Moting appeared to try to poke the ball home, only for his foot to stop it on the goal line and prevent PSG from equalising after they had gone 2-1 down.

"I hesitated, I thought maybe I was offside," said the 30-year-old.

Thilo Kehrer later equalised for PSG who nevertheless were made to wait to celebrate an eighth Ligue 1 title as they had needed all three points to be crowned champions on Sunday. 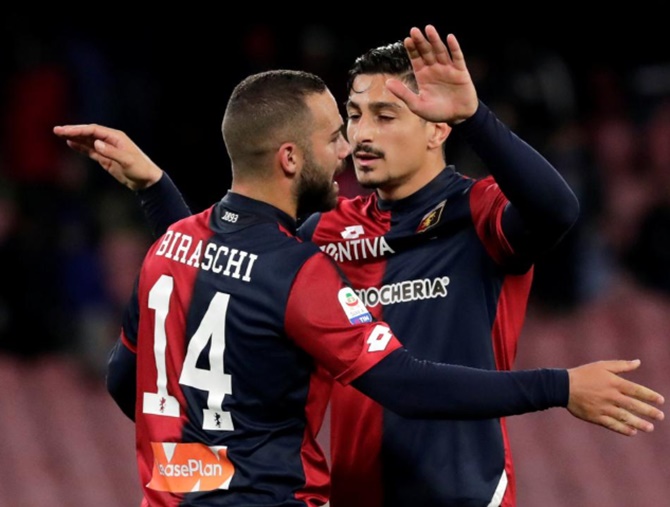 Juventus were forced to wait at least another week to celebrate their eighth successive Serie A title after second-placed Napoli drew 1-1 at home to 10-man Genoa on Sunday.

A win for Genoa would have handed the Turin side the title with a record seven matches to spare and they came closer than expected despite having Stefano Sturaro sent off after 28 minutes.

Instead, Juventus, who are 20 points clear and ahead on their head-to-head record with Napoli, still need one more point to extend their dominance over Serie A for another season. Their next fixture is away to SPAL on Saturday.

Genoa -- the only team to have beaten Juventus in the league this season -- were dangerous from the start as Goran Pandev fired a low shot just wide and then had a dipping effort tipped away by Orestis Karnezis.

Even after Sturaro was sent off for recklessly lunging at Allan -- the referee changing a yellow card to red after a VAR review -- Genoa kept pressing as if nothing had changed and Karnezis had to tip a Christian Kouame shot over the bar.

Dries Mertens fired Napoli in front with a low shot from the edge of the area in the 34th minute but not even that deterred Genoa.

After defender Koray Gunter had hit the post from a corner, Darko Lazovic met Pandev's chip into the penalty area first time and drilled a low shot past Karnezis.

Napoli penned Genoa into their own half for most of the second half but Kouame remained a constant threat and nearly won it for the visitors when he forced a point-blank save from Karnezis on a rare counter-attack.

Genoa goalkeeper Ionut Radu then made two outstanding saves to make sure of a deserved point for his side. 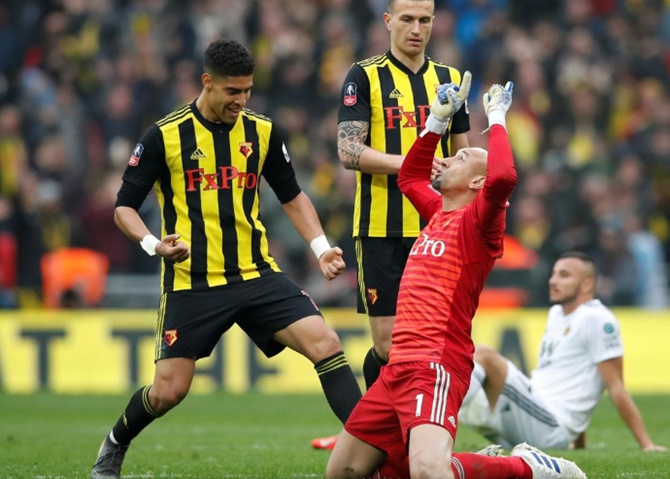 Watford produced one of the great FA Cup comebacks by coming from two goals down to beat Wolverhampton Wanderers 3-2 after extra time of a memorable semi-final at Wembley Stadium on Sunday.

Two-goal substitute Gerard Deulofeu proved Watford’s hero as they reached the FA Cup final for the first time in 35 years in astonishing fashion.

The Spaniard scored a sensational individual goal to drag his side back into the match when they were 2-0 down with 11 minutes left and then slotted home the winner in the opening period of extra time to book a final date with Manchester City.

Striker Troy Deeney also enhanced his folk hero status at Watford by nervelessly converting a penalty with the final kick of stoppage time in the 94th minute to enable the Hornets to take the game into extra time.

A first-half header from Matt Doherty and a dazzling piece of skill which saw Mexican Raul Jimenez chest down and volley home acrobatically just after the hour had looked set to be enough for Wolves to prevail in the all-Premier League clash.

Jimenez donned a mask for his familiar superhero celebration while VAR was ruling that he was not offside.

A 79th-minute goal from Deulofeu — a magnificently executed curling chip — was just as virtuoso, setting up the amazing finale which saw Deeney blast home from the spot after being brought down by Leander Dendoncker.

Deeney had to cope with the nervous wait of another VAR review to determine whether the penalty should be awarded before he smashed it into the net and he reckoned the emphatic conversion was the best moment of his Watford career.

Spanish international Deulofeu, who was brought on in the 66th minute, delivered the killer blow a minute before the break of extra time, driving past Conor Coady on the right before slipping the ball across John Ruddy and into the net.

Deulofeu could have felt some irritation at being left out of manager Javi Gracia’s original 11 but said afterwards: “That’s not important, the most important thing is that we go to the final and I’m proud to help the team.”

Spaniard Gracia, who has already overseen a breakthrough season for the Hornets with their record Premier League points haul, praised his match-winner.

The win earned Watford the toughest of dates with overwhelming favourites City, who beat Brighton & Hove Albion 1-0 in Saturday’s other semi-final, in the final back at Wembley on May 18.

Pep Guardiola’s City are still battling to achieve an unprecedented ‘quadruple’ of trophies, having already won the League Cup at Wembley and being still in line to win the Premier League and Champions League.

Senad Lulic snatched an equaliser in the fifth minute of stoppage time to give Lazio a dramatic 2-2 draw with Sassuolo in Serie A on Sunday after the visitors had gone ahead in the 89th minute.

Despite the late goal, it was another setback for Lazio in their chase for a Champions League place following their shock defeat at SPAL on Wednesday.

Lazio went ahead with a contentious Ciro Immobile penalty in the 53rd minute, awarded against Manuel Locatelli for handball following a VAR review that took nearly four minutes.

Locatelli came sliding in to block a cross and the ball appeared to hit him on the hip before rebounding on to his outstretched arm.

Sassuolo levelled four minutes later with a scrappy goal which was given to Rogerio although Pol Lirola had the original shot.

Lazio missed a flurry of chances and were then hit on the counter as Domenico Berardi put Sassuolo ahead with one minute left, but there was a final twist as Lulic turned in an Immobile cross at the far post.

The drew left Lazio with 49 points, three behind AC Milan who are fourth in the lowest of the Champions League places, although they still have a game in hand.

In earlier matches, Daniel Ciofani scored in the 84th minute to give next-to-bottom Frosinone a shock 1-0 at Fiorentina -- the first time they have ever won back-to-back matches in Serie A.

Cagliari beat SPAL 2-1 while two goals from Rodrigo De Paul helped Udinese to come from behind to beat relegation-threatened Empoli 3-2 in a game where all five goals came in the first half.