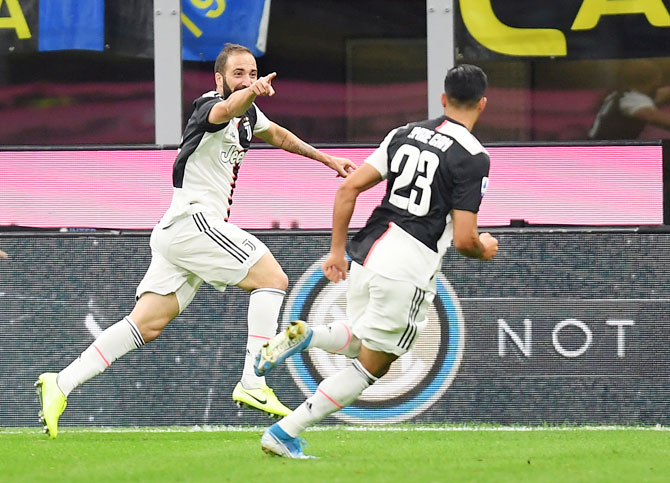 IMAGE: Juventus' Gonzalo Higuain celebrates scoring their second and winning goal against Inter Milan in their Seria A match at San Siro in Milan on Sunday . Photograph: Daniele Mascolo/Reuters

Juventus ended Inter Milan's perfect record in Serie A and took over top spot as Gonzalo Higuain's superb late strike earned a 2-1 victory in the San Siro on Sunday.

The Argentine striker, on as a substitute, applied a clinical finish to a flowing move in the 80th minute.

Paulo Dybala had fired Maurizio Sarri's Juve side in front after four minutes but Inter, who had won all six of their matches before Sunday's clash, levelled in the 18th minute.

Matthijs de Ligt was adjudged to have handled in the area and Lautaro Martinez converted the spot kick.

Juventus moved top with 19 points to Inter's 18 and it was a deserved victory in an absorbing contest.

"Juve is in another category from all points of view, we cannot compare to them," said Inter manager Antonio Conte.

"The gap is there and it is important. We have won six games bringing the car to 200 miles per hour and we will try to do it again."

Inter recovered from conceding early and after equalising could have gone ahead when Martinez forced Wojciech Szczesny into a great save with a powerful cross shot.

But Juve carved out the best chances with Cristiano Ronaldo denied by keeper Samir Handanovic and then had a goal ruled out for offside before the break. 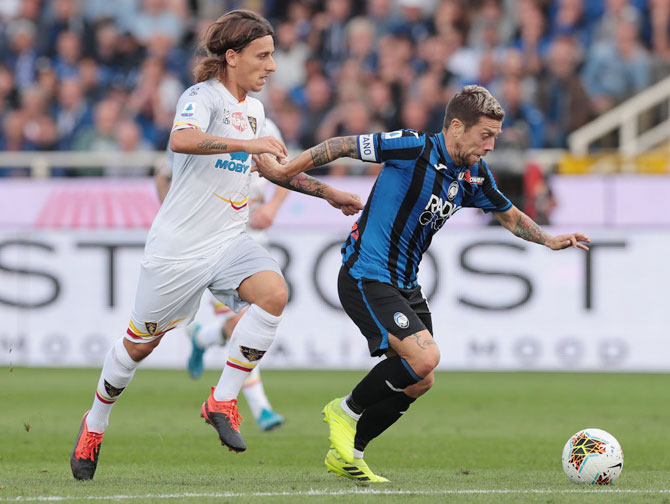 IMAGE: Atalanta's Alejandro Gomez is challenged by US Lecce's Jacopo Petriccione during their Serie A match at Gewiss Stadium in Bergamo, Italy, on Sunday. Photograph: Emilio Andreoli/Getty Images

Sarri sent on Higuain and Rodrigo Bentancur as Juve chased a winner in the second half and the changes worked wonders.

Just when it was beginning to look as if the sides would have to settle for a point, Juve worked the ball forward and, after Ronaldo and Bentancur exchanged passes, Higuain was freed to slot home the winner in lethal fashion.

"It was a great match for Juventus," Higuain, who replaced Federico Bernardeschi, said.

"Inter came from six victories but we played with great character and determination and luckily we managed to bring it home."

Atalanta have 16 points in third after their impressive start continued with a 3-1 home victory over Lecce.

Duvan Zapata opened the scoring in the 35th minute when he punished a defensive mistake and then combined well with Alejandro Gomes who made it 2-0 before halftime.

Robin Gosens added a third early in the second half. A late goal from Dudu rescued a point for Palmeiras at home to Atletico Mineiro on Sunday but the Sao Paulo side fell back in the Serie A title race as leaders Flamengo won away to extend their lead to five points.

Nathan put Atletico ahead right on the stroke of halftime but Dudu worked a beautiful one-two with Gustavo Scarpa before slotting home from a tight angle seven minutes from time.

The 1-1 draw leaves Palmeiras, the reigning Brazilian champions, second in the standings with 47 points from 23 games.

Flamengo, who beat bottom side Chapecoense 1-0 away from home, are top, with 52 points.

"The difference has increased by two points. This is the time to keep calm so we can reel Flamengo back in."

© Copyright 2020 Reuters Limited. All rights reserved. Republication or redistribution of Reuters content, including by framing or similar means, is expressly prohibited without the prior written consent of Reuters. Reuters shall not be liable for any errors or delays in the content, or for any actions taken in reliance thereon.
Related News: Dudu, Gonzalo Higuain, Juve, Inter Milan, Palmeiras
SHARE THIS STORYCOMMENT
Print this article 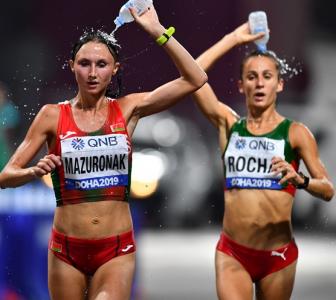 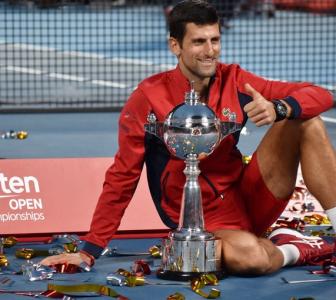