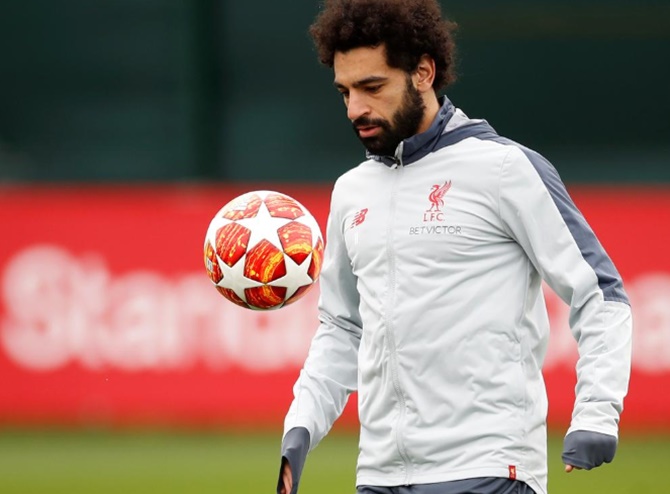 IMAGE: Mohamed Salah has won the African Footballer of the Year for the last two years. Photograph: Carl Recine/Reuters

Liverpool pair Sadio Mane and Mohamed Salah, plus Riyad Mahrez from Manchester City, were named as the three candidates for this year’s African Footballer of the Year award, to be decided next month.

Senegal talisman Mane will be the favourite for the award ahead of his Egyptian club mate after Liverpool won the Champions League. However, he faces stiff opposition from Mahrez, who won the Premier League with City and also captained Algeria to the Africa Cup of Nations title in mid-year.

The nominees were named on Sunday after being selected by a panel of technical experts from the Confederation of African Football plus former players and media.

The coaches and captains of the 54 African national teams will now vote for the winner, to be announced on Jan. 7 at a ceremony at Hurgada in Egypt.

Salah has been African Footballer of the Year the last two years while Mahrez was the winner in 2016.

Sane was third in 2016 and runner-up to Salah the last two years. 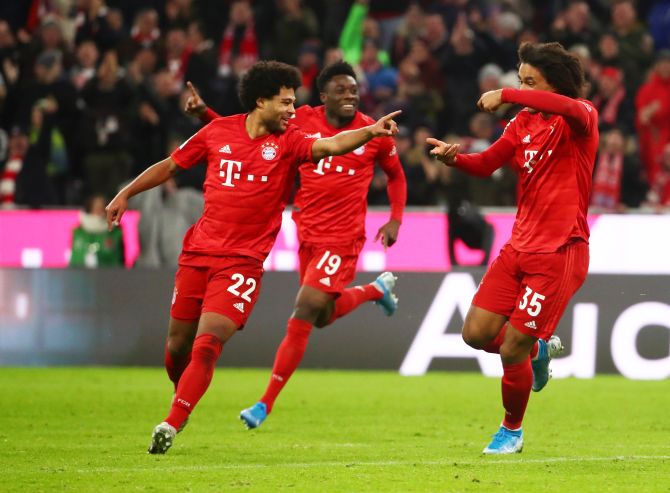 Bayern Munich's Joshua Zirkzee and Serge Gnabry scored late goals to give them a 2-0 win over VfL Wolfsburg at the start of the winter break on Saturday as RB Leipzig sealed the unofficial autumn champions title with a comeback victory over Augsburg.

Dutch teenager Zirkzee, who also netted in stoppage time in their 3-1 midweek win over Freiburg, scored with his first touch of the ball in the 85th minute.

He slotted in three minutes after coming on as a substitute for Philippe Coutinho and Gnabry doubled the lead in the 89th to lift Bayern to 33 points in third place.

"It was by no means our best game today," Bayern interim coach Hansi Flick, whose future at the champions' bench will be decided in the winter break, told reporters.

"Wolfsburg defended really well and closed all the spaces really well. I am just proud of the team. They deserved the victory just like they did in the previous few games. They believed in it until the end."

Winners of the last seven league titles, the Bavarians were again wasteful with their chances in a one-sided first half, Coutinho, Gnabry, Robert Lewandowski and Thomas Mueller all going close.

The hosts had to take off injured Javi Martinez before halftime but they again dominated after the break while proving ineffective in their finishing until the introduction of Zirkzee.

The teenager has quickly made a name for himself and, with the team's injury list growing, could be in for more playing time after the break is completed in mid-January.

RB Leipzig went top with a 3-1 win at home to Augsburg, coming from a goal behind to clinch the three points and secure the autumn bragging rights for the first time in the club's brief Bundesliga history.

Leipzig needed second-half goals from Konrad Laimer, Patrik Schick and Yussuf Poulsen to grab victory and move on to 37 points, two clear of Borussia Moenchengladbach, who only managed a point with a 0-0 draw at Hertha Berlin.

Schalke 04 remained in fifth place on 30 after their 2-2 draw against Freiburg while Bayer Leverkusen moved up to 28 and into sixth after ending their year on a high, with a 1-0 win at Mainz 05 thanks to Lucas Alario's stoppage-time winner.

Bayern confirm Flick as head coach until end of the season

Bayern Munich interim coach Hansi Flick will remain in charge until the end of the season, the German Bundesliga champions said on Sunday.

Flick was promoted from the coaching staff after Niko Kovac's dismissal following Bayern's 5-1 thrashing away to Eintracht Frankfurt last month.

He was initially hired for two matches against Olympiakos in the Champions League and against Borussia Dortmund in the league. But after two wins he was trusted to continue until the winter break.

"Under him as head coach, the on-field development has been outstanding, both in terms of the quality of our play and the results achieved," Rummenigge said in a statement.

"We set a new record in the 28-year history of the Champions League with six wins in six matches in the group stage, and in the Bundesliga we have returned to touching distance of the top of the table."

Bayern currently sit third in the Bundesliga standings, four points behind leaders RB Leipzig ahead of the mid-season break, and have been drawn against Chelsea in the Champions League last 16.

"I'm happy that FC Bayern is continuing to place trust in me as head coach," Flick said.

"Now we're recharging our batteries, and we'll prepare ourselves intensively for the second half of the season at the training camp. Then we'll try to achieve as many victories and titles as possible." Blind who previously played for Manchester United between 2014 and 2018, suffered from dizziness in Ajax's Champions League match against Valencia this month, but continued playing.

The 29-year-old has been fitted with a subcutaneous implantable cardioverter defibrillator, the club confirmed on Saturday.

"The most important thing is that I'm feeling good at the moment and trying to come back as soon as possible," Blind said in a video posted on Twitter.

Blind, who was a regular starter in Ajax's incredible run to the Champions League semi-finals last season, will miss the club's January training camp in Qatar, and will continue his recovery in Amsterdam.

Germany playmaker Ozil kicked his gloves in frustration after being withdrawn in the 59th minute of Arsenal's 3-0 defeat at the Emirates Stadium.

Ljungberg, who took temporary charge of Arsenal for the final time in Saturday's goalless draw at Everton, revealed Ozil would have been dropped from the travelling squad had he not been injured.

"The fans were not happy," Ljungberg told reporters. "I got asked about it and said, 'At Arsenal, that's not how we behave and not what we do'. I stand by that.

"Mesut was injured, but I would not have picked him for the squad because I want to make a stance that it's not what I accept from an Arsenal football player.

"That's my decision. I won't make the decisions again, but that's what I think."

It is not the first time an Arsenal player has been involved in a controversy after being taken off at the Emirates Stadium this season.

Granit Xhaka reacted angrily to home fans booing him as he walked off the pitch during a match against Crystal Palace in October, and was subsequently stripped of the club captaincy.

Former captain Mikel Arteta took permanent charge as the new head coach of the club on Sunday, and has described Ozil as a "massive player" for Arsenal in his first news conference.

But the Spanish coach has also promised to be ruthless with Arsenal's struggling squad, warning the players must deliver "passion and energy".

Former Yugoslavia midfielder Dejan Stankovic was given his first full-time job as a head coach after he took over at Serbian champions Red Star Belgrade on Saturday.

Stankovic, who had a brief stint as Andrea Stramaccioni's assistant at Serie A side Udinese, replaced Vladan Milojevic who guided Red Star to two successive league titles and Champions League group stage berths before he stepped down on Thursday.

Stankovic, who spent three years at Red Star as a teenager before moving to Italy, was delighted to return home and thanked Milojevic for welcoming him into the driving seat.

"Red Star launched me many years ago with a mission to return here one day," he told a news conference.

"I've been a football man for 20 years and I've never seen an outgoing manager greet his successor with a smile.

"My staff and I are eager to carry on where Milojevic left off and we are aware of the pressure. This is an emotional moment but we have to put our emotions aside and work with cool heads in order to achieve our objectives."

They were eliminated from European competition after finishing bottom of their Champions League group, with their campaign including 5-0 and 4-0 defeats by Tottenham Hotspur.

The 41-year old Stankovic enjoyed a distinguished career in Italy, winning one league title at Lazio and five at Inter Milan, where he also lifted the 2010 Champions League.

Fiorentina sacked coach Vincenzo Montella on Saturday as the club's new owners finally lost patience after a 4-1 home defeat by AS Roma the previous evening extended their winless league run to seven matches.

The 43-year-old's second stint at the Serie A club lasted only eight months and produced a modest record of six wins, seven draws and 14 defeats in 27 matches in all competitions. Two of those wins were in the Coppa Italia against lower-division sides.

Fiorentina said in a statement that "the decision was taken following a long and detailed analysis of the team's performances and results."

"Given the need to rediscover the necessary grit and determination on the pitch and produce an immediate turnaround, the owners and management decided that a change of coach was the best option," it added.

Montella, previously in charge for three seasons between 2012 and 2015, returned in April but his team lost five of their first six games under his leadership and only escaped relegation with a 0-0 draw at home to Genoa in their final match of last season.

The team began the new season with new hope after American billionaire Rocco Commisso bought the club in June in a deal reported by Reuters to be valued at 160 million euros ($177.25 million).

Yet, apart from a run of three successive wins in late September and early October, the team failed to click and Montella was not helped by the absence of Ribery, who was given a three-match suspension for pushing a linesman and then had to undergo ankle surgery.

Montella became the eighth coach to lose his job in Serie A this season.

"The club would like to thank Vincenzo Montella for his efforts and commitment in recent months and we wish him every success in the next chapter of his career," said the statement.

Fiorentina, twice Serie A champions, have not won a major trophy since being re-founded in 2002 following bankruptcy.

Peters was part of the 1966 World Cup-winning side and scored in the final against West Germany.

"It is with profound sadness that we announce that Martin passed away peacefully in his sleep at 4:00 am this morning," said a statement from his family posted on West Ham's website.

"A beloved husband, dad and grandad, and a kind, gentle and private man, we are devastated by his loss but so very proud of all that he achieved and comforted by the many happy memories we shared."

The midfielder, described by former England manager Alf Ramsey as "10 years ahead of his time" won 70 senior caps for his country. He scored 100 goals in 364 appearances for West Ham before moving across London to join Tottenham Hotspur in 1970 in a deal that saw striker Jimmy Greaves go the other way.

Peters won the UEFA Cup and two League Cups with Tottenham before spells with Norwich City and Sheffield United.

"We extend our sincere condolences to his family and many friends in the game at this sad time. A truly footballing great has left us but his memory will live on," a tribute on Tottenham's website said.

Geoff Hurst, England's hat-trick hero in the World Cup final and a former West Ham team mate of Peters, described him as one of the all-time greats.