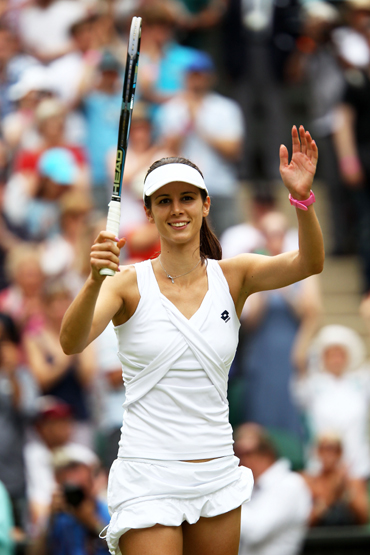 Five-times champion Venus Williams followed her sister Serena out of Wimbledon on Monday when she was outplayed by Bulgaria's Tsvetana Pironkova for the second year in a row.

The American, seeded only 23rd after spending most of the year out injured, failed to fire in the fourth-round clash and was hammered 6-2, 6-3 on Centre Court.

The 31-year-old Venus produced a lame performance against Pironkova, the player who stopped her in the quarter-finals last year.

"Unfortunately I seem not to have my good days against her," Venus said.

"I think we both envisioned seeing this day going a little bit different."

Pironkova, the 32nd seed, will now face Petra Kvitova with both players bidding for semi-final places again after their surprise runs last year. 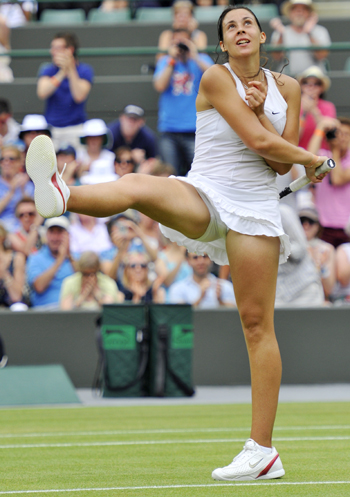 Defending champion Serena Williams saved four match points before losing 6-3, 7-6 to Frenchwoman Marion Bartoli in the fourth round on Monday.

The American, seeded seventh after serious health problems, struggled throughout against the ninth-seeded Frenchwoman, making a succession of unforced errors on Court One.

Bartoli took the first set on her sixth set point and she continued to move the 13-times grand slam champion ruthlessly around the court to move to the brink of victory.

She had three match-points in the 12th game of the second set but Williams showed all her battling qualities and great composure to save them and force a tiebreak.

Bartoli continued to serve strongly and she earned another two match points, the first of which Williams saved with an ace, but the Frenchwoman took the second to take the tiebreak 8-6.

"Beating Serena is a dream come true, she is one of the greatest champions of the open era," Bartoli said in a televised interview.

"It was not easy mentally but I did it and I am very happy. She is very imposing. If you look at her it is difficult to handle the pressure so I was just trying to focus on my own game." 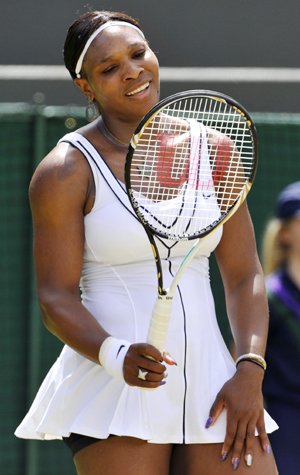 Serena, who returned from 11 months out with a lacerated foot and then life-threatening blood clots just in time for Wimbledon, had spent the first three rounds shaking off the rust and appeared to be rediscovering the firepower that has brought the 29-year-old 13 grand slam titles.

Once again Serena scrapped like an alley-cat but the unorthodox Bartoli, beaten by Venus in the 2007 final, proved a match too far for the champion whose hopes of three consecutive titles evaporated in oppressive heat on Court One.

After defeat, though, she fired out an ominous warning.

"Even today I lost, but I was able to kind of hang in there and play tough," Williams, who was watched by friend and soul diva Beyonce, told reporters.

"And I can only get better. And that can potentially be really scary, because I can only go up from here and I can just do so much more."

Bartoli appeared to be playing with fire at times, jumping around inside the baseline as her opponent wound up her mighty serve and fist-pumping towards Williams after big points. Top seed Caroline Wozniacki was upset 1-6, 7-6, 7-5 by Dominika Cibulkova in the fourth round at Wimbledon on Monday, following defending champion Serena Williams out of the tournament.

Dane Wozniacki, bidding for her first grand slam title, looked to be cruising through to last eight for the first time as she comfortably took the first set against the diminutive 24th seed from Slovakia.

But Cibulkova raised her game to take the second-set tiebreak and she stayed with the world number one through a final set riddled with breaks of serve before clinching a shock win on her third match point with a crunching forehand.

Wozniacki, playing with the confidence gained from five WTA titles this year, had reached the second week with the minimum of fuss, winning all her matches in straight sets and dropping only 12 games, the least by any player in the tournament.

She maintained that form in a quickfire first set and few in the crowd would have suspected an upset was on the cards.

'I realised I had to go for my shots' 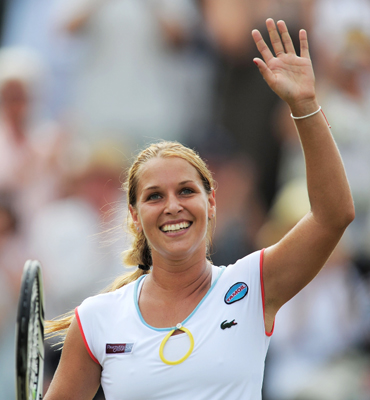 Unleashing the huge forehands that belie her diminutive stature, the Slovak 24th seed forced a tiebreak which she took 7-5 to ask the world number one a serious question for the first time in the tournament.

The third set was all over the place with two breaks apiece in the first six games as the two women backed themselves to overpower the other from the baseline.

It then went with serve to 5-5, when Cibulkova again broke.

She held three match points in her final game and though Wozniacki saved two of them, Cibulkova kept her nerve on the third to win the match by fittingly crashing yet another forehand winner down the line.

"Wozniacki is just great, she's the best defensive player, she waits and waits and takes her chance so after the first set I realised I had to go for my shots," said Cibulkova.

"It was all or nothing, that's how I started to play, and I was really going for everything and I played really well today.

"I just had to be more aggressive on return, even in the first set I was doing well in the few rallies there were so I had to get into the rallies.

"I was really risking it, my forehand was really working and I went for it," added Cibulkova, who meets sixth-seed and 2004 winner Maria Sharapova in the quarter-finals. 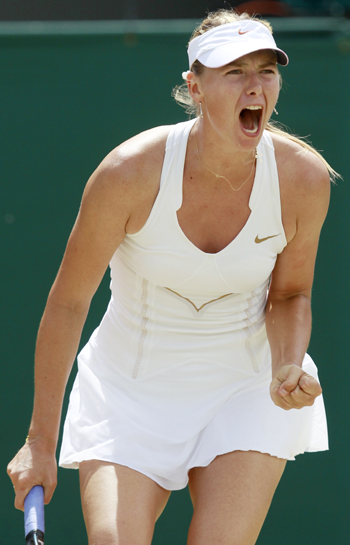 With fiance Sasha Vujacic roaring his approval on a sweltering Court Two, the Russian fifth seed had a few early problems against the unorthodox Chinese before striding away to the last eight on the lawns for the first time since 2006.

The 2004 champion had to save two break points as the opening two games took nearly 15 minutes and her forehand and serve were both a little hit-or-miss.

Peng, who hits double-handed off both sides, threatened again with Sharapova serving at 3-4 but the blonde ramped up the volume and the power on her bludgeoning forehand to stay on level terms then broke through in the next game.

Peng, playing in the fourth round of Wimbledon for the first time, panicked, going down 0-40 and although a couple of beefy serves clawed back two of the break points Sharapova pounced on the third when her opponent made a mess of a forehand she was forced to play one-handed.

Sharapova served out the set to love with an ace and there was sense of inevitability about the rest of the match as she eased through the second set.

The Florida-based 24-year-old, still to drop a set at the championships this year, will face Dominika Cibulkova in the last eight. The Serbian second seed was in complete control on Court One, pummelling his 19th-seeded French opponent with a blistering range of groundstrokes and serves.

Djokovic clinched victory on his first match-point with a forehand winner and will face 18-year-old Australian Bernard Tomic, his regular hitting partner, in the last eight. 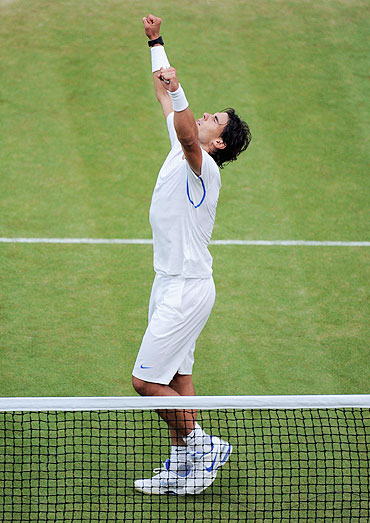 The top seed and defending champion had to be at his resilient best to see off the 2009 US Open winner from Argentina, particularly after suffering a foot injury which caused a lengthy delay at the end of the first set.

Spaniard Nadal regrouped after the break to win the tiebreak 8-6 and although Del Potro won the second set Nadal's phenomenal mental strength always kept him in control of the match.

Del Potro suffered a heavy fall at 2-2 in the third set and went off-court for treatment on a hip injury.

Nadal broke Del Potro's serve for the first time in the fifth game of the fourth set and he clinched victory on his first match point to set up a quarter-final against American Mardy Fish. 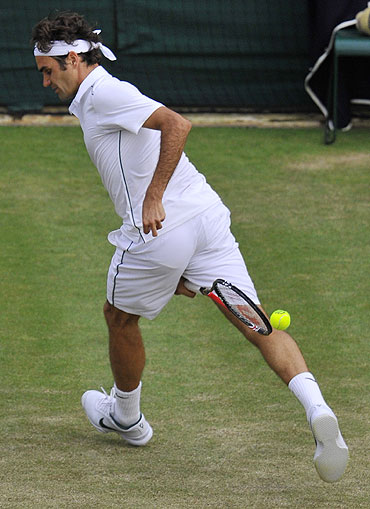 Image: Roger Federer hits a return between the legs during his match against Mikhail Youzhny
Photographs: Reuters

Roger Federer dropped his first set of the tournament before his immense attention to detail helped him overcome Mikhail Youzhny 6-7, 6-3, 6-3, 6-3 on Monday to seal a place in the Wimbledon quarter-finals.

The Swiss third seed, seeking a record-equalling seventh Wimbledon title, had the first set tiebreak in the bag but some sloppy shots allowed the Russian to storm back and take it 7-5.

An array of clever leaves, confident volleys and backhands landing right on the baseline put Federer level and then ahead while his use of line challenges was expert in contrast to the reckless Russian.

Federer's radar was slightly off with some booming forehands but he fully deserved to set up a last-eight clash with 12th seed Jo-Wilfried Tsonga of France. 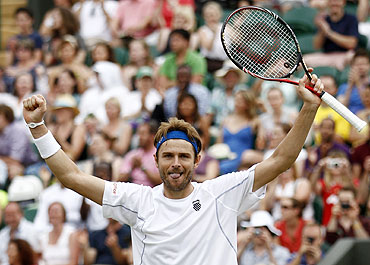 Mardy Fish kept the U.S. flag flying at Wimbledon on Monday by beating last year's runner-up Tomas Berdych 7-6, 6-4, 6-4 to book a quarter-final place as the other American survivors exited the tournament.

Tenth seed Fish edged a first-set tiebreak 7-5 before pulling away from the Czech sixth seed to set up a last-eight clash with Rafa Nadal.

Compatriots Serena and Venus Williams were bundled out of the women's draw earlier on Monday before Fish chalked up 23 aces and signed off with an emphatic smash.

"That was one of the best serving days of my life," Fish said in a televised interview.