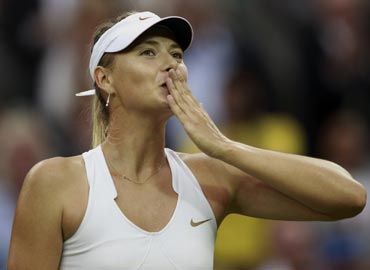 Fifth seed Maria Sharapova, the last giant left in the women's draw, powered into the Wimbledon semi-finals after being head and shoulders above diminutive Slovak Dominika Cibulkova in a 6-1, 6-1 demolition on Tuesday.

Having not dropped a set all tournament, the Russian looks hot favourite to seal her fourth grand slam title and meets German wildcard Sabine Lisicki in the last four on Thursday.

"It's really an honour, it's been a few years since I got past the fourth round," Sharapova said in a televised interview.

"Every opponent is different and every day is different. I have a tough opponent coming up and I'm looking forward to it. She is a player playing with a lot of confidence right now."

The Russian, the last former champion left among the women having triumphed in 2004, broke three times in the first set under the Centre Court roof as she dominated 24th seed Cibulkova from the baseline.

Three further breaks in the second set meant victory, in just over an hour, was a mere formality on the grass.

Cibulkova beat Sharapova 6-0, 6-2 in the French Open in 2009 when the Russian was coming back from a serious shoulder injury and wondered whether she would ever reach the top again.

"To be in the semis of Wimbledon is a bonus. To come back and play tennis after a big injury, I was just happy to be back on court," she added. 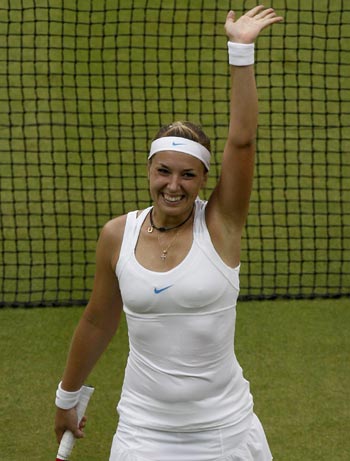 German wildcard Sabine Lisicki added another gripping chapter to her remarkable Wimbledon story when she recovered from wasting three match points to beat Marion Bartoli 6-4, 6-7, 6-1 under the Centre Court roof in an enthralling quarter-final on Tuesday.

The 21-year-old, out of action for five months last year with a horrific ankle injury, became the second wildcard to reach the Wimbledon semis after China's Zheng Jie in 2008 and the first German to do so since Steffi Graf in 1999.

"I really can't explain how I feel. It was just such a tough route back (from injury) and it's so wonderful to be standing on Centre Court which I love so much," Lisicki, who will play fifth seed Maria Sharapova in the last four, told reporters.

Playing to a backdrop of thunder and lightning, with rain hammering down on the closed roof so loud that it drowned out the sound of ball on racket, it was a dramatic occasion befitting one of tennis's great venues.

Both players lived up to it too, exchanging ferociously powerful groundstrokes and mixing in crowd-pleasing dropshots in a high-quality encounter.

Lisicki, who saved two match points en route to beating French Open champion Li Na in the second round, was on top from the start and won the first set convincingly.

Lisicki, who had to be carried off court on a stretcher after wasting a match point and losing to Vera Zvonareva at this year's French Open, kept her mind and body under control and quickly broke to lead 2-0 in the third.

The German reckoned there was no reason she could not go all the way.

"I did a very good job to get here, I'm getting better with each match and I have absolutely nothing to lose," she said.

"I'm here in the semis. I'm going to go out there and fight and give it all I have."

'At the end I couldn't do it anymore' 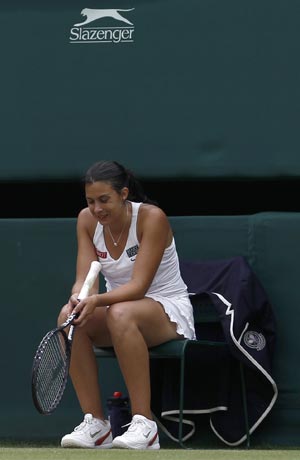 The ninth-seeded Bartoli, who knocked out defending champion Serena Williams on Monday, broke in the fourth game of the second set but Lisicki, helped by two outrageous baseline drop shots, broke straight back.

In a remarkable tiebreak, 10 of the 11 points went against serve but 2007 runner-up Bartoli, who put every ounce of her energy into her groundstrokes, not to mention her manic pre-serve routine, took it 7-4.

Bartoli said she had simply run out of energy.

"I have no regrets, my mind was trying extremely hard, but just my body couldn't do anything anymore," she stated.

"I think I really paid for all the effort I had in the last month, I've played a lot of matches, a lot of long matches, and at the end I couldn't do it anymore." 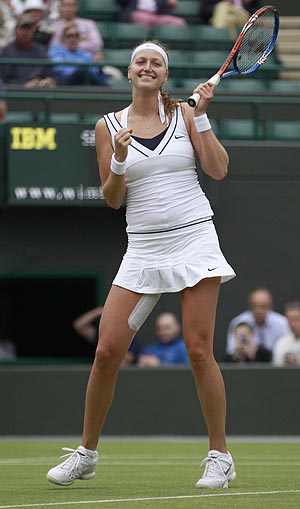 Petra Kvitova reached the Wimbledon semi-finals for the second year in a row with a 6-3, 6-7, 6-2 win over Bulgaria's Tsvetana Pironkova on Tuesday.

The Czech left-hander, who has blasted into the world's top 10 this year, broke Pironkova's serve to love in the opening game of a first set she dominated.

The eighth seed had to battle back in the second as Pironkova, also a surprise semi-finalist last year, loosened up to establish a 4-2 lead but Kvitova responded to take the set into a tiebreak.

The 21-year-old Kvitova had her nose in front in the breaker but two consecutive forehands into the tramlines allowed her opponent to take the match to a decider.

Kvitova, bidding to become the first left-hander to win the women's sigles at Wimbledon since Martina Navratilova in 1990, quickly put the setback behind her to dominate the third set, sealing victory with her ninth ace to set up a semi-final against Victoria Azarenka or Tamira Paszek.

"I'm very happy that I managed to break early in the third set and it was a different game then," Kvitova said in a televised interview.

"It's good I have the experience of last year when I got to the semi-final and I'm looking forward to playing Maria." 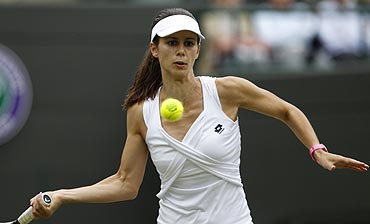 Pironkova, who had hammered 23rd seed Venus Williams 6-2, 6-3 in the previous round, failed to recreate the magic.

The Bulgarian 32nd seed had also beaten the 31-year-old American in the quarter-finals last year.

However, in the battle of the two surprise semi-finalists last year on Tuesday, it was Kvitova who triumphed, booking her second successive semi-final berth. 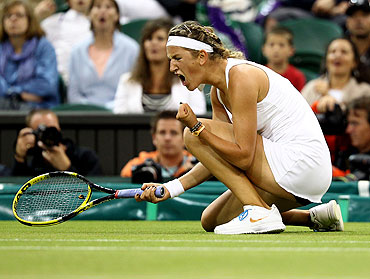 Victoria Azarenka shrugged off an unusual change of courts to crush Tamira Paszek 6-3, 6-1 and reach the Wimbledon semi-finals for the first time on Tuesday.

The pair began their match on Court One but after just one game they both agreed conditions were too slippery and as the referees pondered what to do, drizzle came down to make the decision for them.

In a largely unprecedented move, organisers decided to switch the match to Centre Court given the roof had prevented Sabine Lisicki and Maria Sharapova's victories from being unduly affected by the weather.

The fourth seed from Belarus, who changed from leggings to a skirt after switching courts, then overwhelmed her Austrian opponent and clinched victory on her second match point.

She will play Czech eighth seed Petra Kvitova in the last four, with fifth seed Sharapova taking on wildcard Lisicki in the other semi-final.

'I wanted to give my mum a good birthday present' 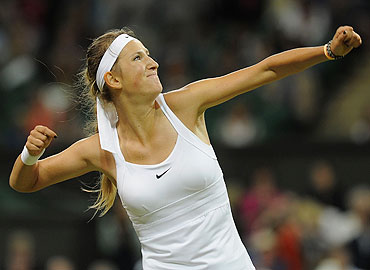 "It was very difficult to wait the whole day and keep focus the whole day," Azarenka said in a televised interview having hung around in the locker room as Kvitova's Court One match with Tsvetana Pironkova was delayed by rain.

"I'm glad we managed to play today. It's my mum's birthday today so I wanted to give her a good gift."

Azarenka, in good form this year but entering her first Grand Slam semi-final, has caused commotion at Wimbledon because of the extreme wailing noise she makes when striking the ball.

Despite her idiosyncrasies, she is seeded higher than fifth seed Russian Sharapova and looks the former winner's biggest threat for the title.

Austria's Paszek, who beat sixth seed Francesca Schiavone in a long three-setter in the third round, looked overawed from the start and the result was never really in doubt.