Mom's the word for Mary Kom at London 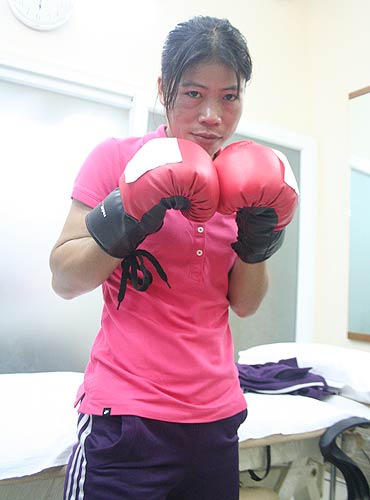 For M C Mary Kom, the London Olympics is a dream realised twice over. The five-time World champion is not just excited about being the only Indian woman boxer at the quadrennial extravaganza, but is also overjoyed about having her mother in the stands to watch her live for the first time.

Women's boxing will make its Olympic debut in London and, fittingly, it is the 29-year-old Mary Kom (51kg) who will be shouldering Indian hopes for a medal.

The diminutive Manipuri, who herself has two kids, says having her mother, Mangte Akham Kom, in London is nothing short of a dream coming true.

Interestingly, Akham Kom will be stepping outside the country for the first time in her life. Her London trip is being sponsored by corporate giant Procter and Gamble as part of its Thank you, Mom campaign.

"Olympics will be the biggest event of my career and I am so excited that my mom would see me live in action for the first time at such a big stage. I can't tell how happy I am right now," said Mary Kom.

"To have her in the stands some day was one of my ambitions and this dream would be real soon." 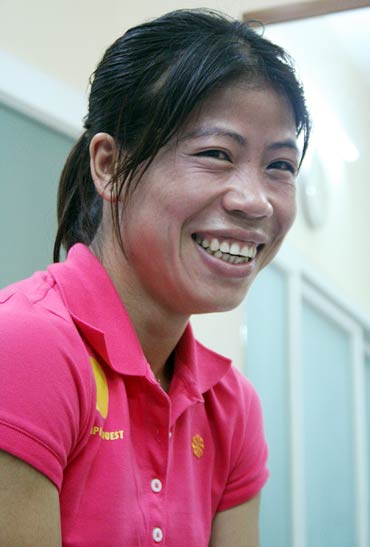 Mary Kom described Akham as an immense source of strength but conceded that she was not quite impressed with her choice of career at first.

"As any other mother, she was worried about my well-being; she didn't want me to get hurt, so she didn't like it when I first started boxing.

"But she never stopped me because of her concerns. She supported my decision even though she did not agree with it," recalled Mary Kom.

'Magnificent Mary', as she is called by the International Boxing Association, described Akham as the "biggest source of strength" in her life.

"While I was away from the country in competitions she helped in taking care of my twin sons. That way I was relieved of a lot of stress," she added.

'I am walking on sunshine' 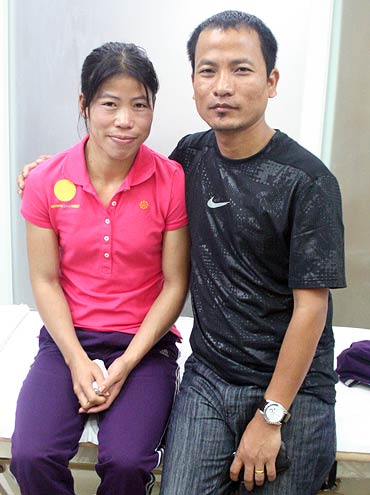 Talking of stress, Mary Kom laughed when asked whether she is feeling the pressure as the Games approach.

"I am walking on sunshine. I don't have any worries," she declared.

"My training in Pune has been just fantastic and I can't wait for the Games to start. There is no stress, I am enjoying my game. I have nothing to prove.

"Yes, it's a big occasion, but I have been there before. It won't be new for me. I will fight the same opponents with whom I have fought in the past," she said.

Mary Kom, if she gets a first-round bye, will have to win just one bout to be assured of a medal in London, where India will also have seven male boxers in contention.
© Copyright 2021 PTI. All rights reserved. Republication or redistribution of PTI content, including by framing or similar means, is expressly prohibited without the prior written consent.