'When I finally made it to the Olympics, I was so happy' 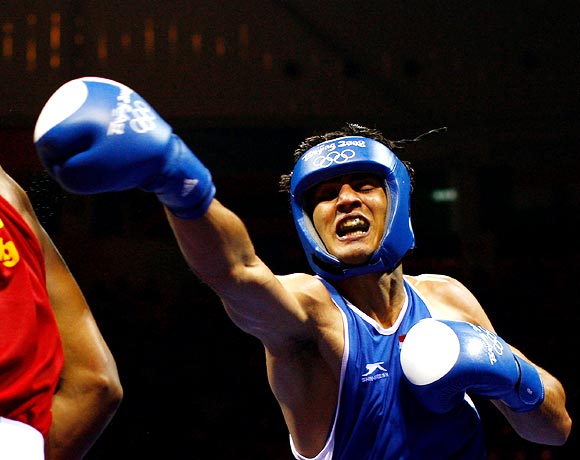 Vijender Singh's knowledge about Hindi movies is as good as his boxing. Ask him to repeat any dialogue or song from a particular movie and he knows it all.

And he is not a bad boxer either!

Earlier this month, Vijender became the first Indian boxer to qualify for a third successive Olympic Games. It gives him a chance to better his showing from the previous Olympics at Beijing, where he won a bronze medal.

The 26-year-old, who will lead a seven-man team at the Games, is confident of Indian boxers returning from London with a few medals this time.

The ace pugilist revealed that he will not be doing any endorsements or shows till July because his focus is solely on winning a gold medal at the summer Games.

In a freewheeling interview with Harish Kotian, India's first ever Olympic medal winner in boxing speaks about his plans for the mega event, and why he thinks he can win a gold medal this time.

You tried hard to downplay the pressure going into the Asian Boxing Championships at Astana. That was your last chance of making it to the Olympics, and certainly there must have been a lot of pressure on you. Is it a big relief that you finally made the cut?

Obviously, it is a big relief, because I was training very hard for the last six months. I was only focused on my boxing and I didn't do any shows or endorsements. And when I finally I made it to the Olympics, I was so happy and relaxed.

It is back to the pavilion now, as I have started training again at the National Institute of Sports (NIS) in Patialia. 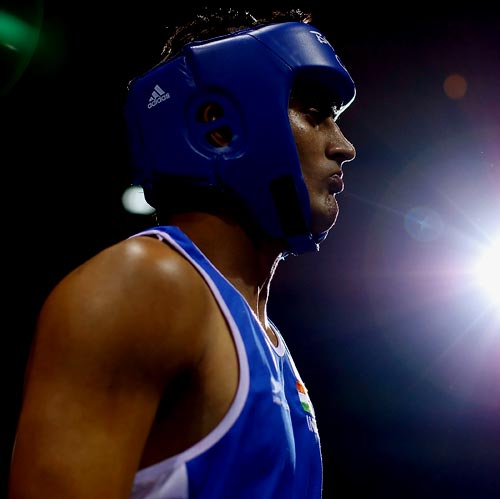 Was there the fear of failure going into that event?

Yes, there was some pressure, because it was my final chance of qualifying for the Olympics. The media built up the pressure and everyone was expecting me to do it.

I am happy that despite all the pressure I was able to deliver and make it to the London Games.

'All my concentration is now on preparing for the Olympics' 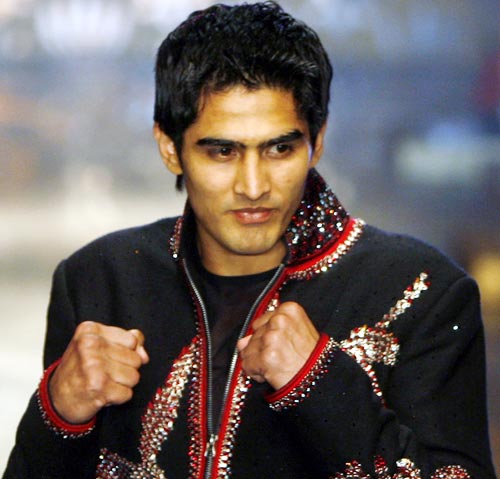 As you said you didn't do any endorsements for the last six months. Will that continue till the Olympics?

Yes, definitely. I will not do any endorsements, because all my concentration is now on preparing for the Olympics. We don't have much time on hand, because we only have nearly 100 days to go. I will focus only on the Olympics.

What is your training schedule going into the Olympics? Will you also take part in a few competitions?

I will not be going for any tournaments. I will stay in India and continue my training. The training schedule will continue normally, and once my coach Gurbux Singh Sandhu is back, we will discuss and see if we need to make a few changes.

'There have been times when I have not done well' 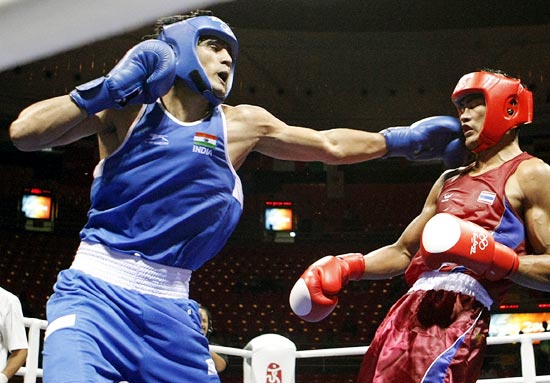 You lost in the first round at the Athens Olympics in 2004, but came back strongly four years later to win a bronze at the Beijing Games. Are you confident that this time you can better that effort and win a gold medal at the London Games?

I am confident I can win a gold medal at the London Olympics. I will prepare well for the Games so I can give my best in every fight and win all of them. It will not be easy, because everyone will come prepared. But I am confident; I work hard, nothing can stop me from doing well in London.

You were ranked the number one boxer in the world in your weight category in 2009. But after that your performance was not up to expectations. You were also knocked out in the first round of the World Championships last year. What mistakes did you make in the last couple of years? How are you looking to improve upon them?

I don't think I made any mistakes as such. There are times when you are unable to give your 100 percent in a fight, and it has happened to me as well. Like Sachin Tendulkar cannot score a century in every match; still, he has made 100 centuries.

There have been times when I have not done well, but I have always bounced back. I feel now I am in top form and back to my best, physically and mentally.

'My wife always complains that we never go out' 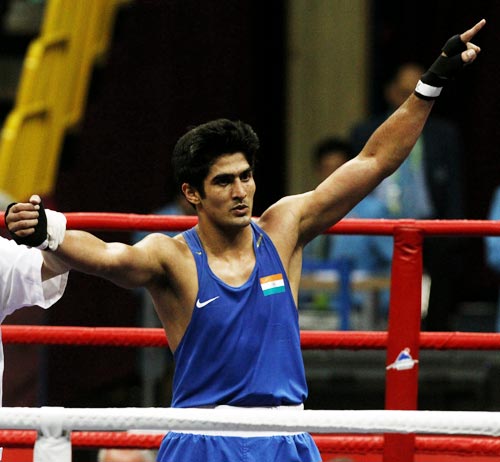 How important a part will fitness play to keep your good form going?

Fitness is very important, and training also vital. Without training and hard work you cannot achieve anything. If you train and work hard you also recover your form soon; fitness levels are maintained too.

You got married last May, but must have hardly had the time to be at home with your wife, Archana. How difficult was it, particularly for your wife?

My wife always complains that we never go out. I have told her that after the Olympics I will have time for her. 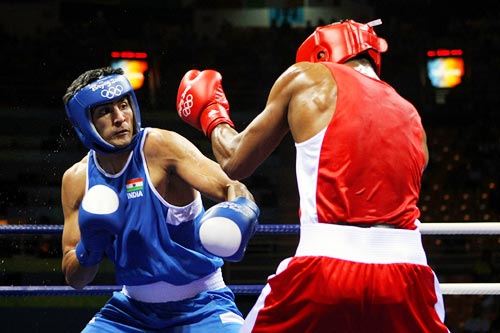 This will be your third straight Olympics. Will this be your last, or will you try and compete in the next one too?

I have always been saying that I want to have a long career. I want to be the Sachin Tendulkar of boxing and keep playing for a long, long time.

I want to compete in a few more Olympics, because I believe I can do more than just three Olympics. 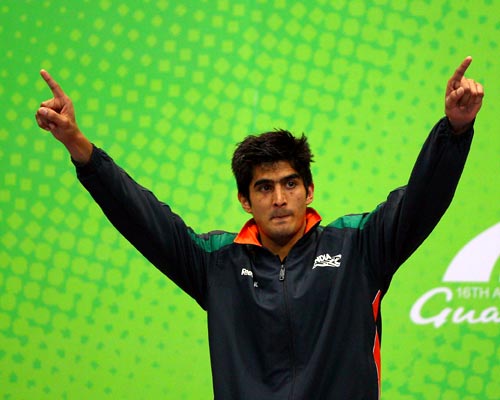 Seven Indian men's boxers have made it to the Olympics this time. Do you believe this team, which has a lot of youngsters, can win medals at the London Games?

Yes, definitely, we will win a few medals in boxing this time. Boxing is an individual sport and not a team sport, so everyone gives their 100 percent. Each and every boxer wants do well at the Olympics so they put in a lot of hard work in their training and fitness programmes.

I am sure we will do well at the Games, because we are among the best boxing nations in the world. (Dekh lenge sabko... kyun ki hum bhi kissi se kum nahi)

Even the Indian women's boxing team is good. They will go for the qualifiers too and I am sure they will also do well.

How do you rate MC Mary Kom's chances at the Olympics?

Mary is the best boxer in the world and has won the World Championship a few times. I am 100 percent sure Mary will win a gold medal in London.

Mary is world-famous and a big name in women's boxing. I don't think anyone can stop her at the moment.

'My Olympic bronze medal was a beginning for boxing in India' 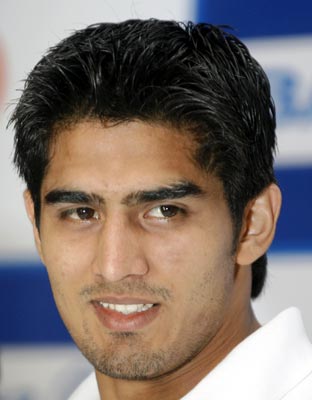 Your bronze medal in the Beijing Olympics changed the face of boxing in India. Does it feel good that because of you the sport got such a big lift?

My Olympic bronze medal was a beginning of sorts for boxing in India and all roads opened after that. I have been doing well consistently since then. I am confident that in future I will also win silver and gold medals in the Olympics.

Do the young boxers approach you for help?

Sumit Sangwan and Shava Thapa were with me in Astana during the Olympics qualifier. I speak a lot to them about boxing and if I have played any of their opponents in the past I tell how to tackle them. I share my experiences with them and that is very important. I believe in development of young boxers.

'The support from the federation is very good' 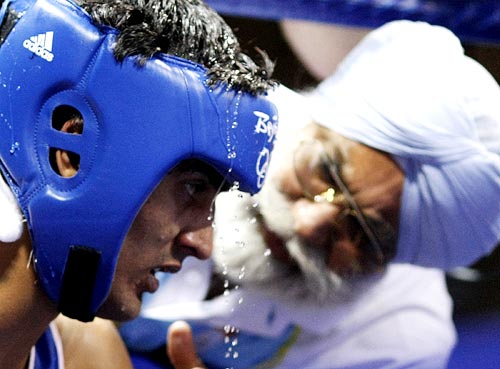 How much credit do you give the IABF (Indian Amateur Boxing Federation) for the success of Indian boxers in recent years? They made a long-term plan for the Olympics and it seems to have worked well so far, with as many as seven qualifying for the Games.

The support from the federation is very good. They have supported all of us well and taken care of all our needs with regard to training and competition. All the boxers, whether they are juniors or seniors, have been treated well by the authorities.

I also want to say a special thank you to all my coaches and physios, like Hari [Shankar Varma] and Vaibhav [Patil] because they have put in a lot of hard work with the boxers. I also want to thank all the authorities and staff at the National Institute of Sports (NIS) at Patiala, who never let us face any problems when we stay there for the camps. I love the food there and want to thank everyone who works in the kitchen at the NIS. The food there is amazing!