Federer knocked out of French Open by Gulbis 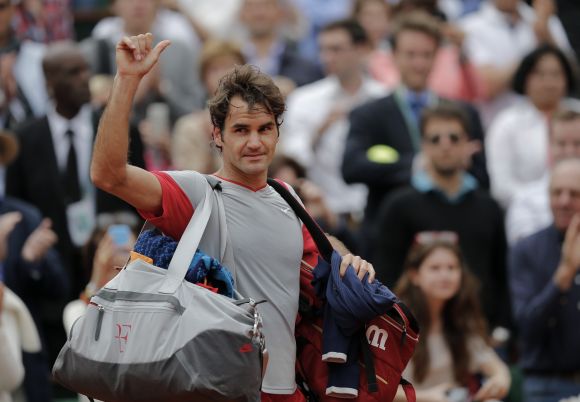 It was the fourth seed's earliest departure at Roland Garros since 2004 and the 2009 champion can have few complaints as Gulbis earned the biggest win of his career.

Federer made an unusually high number of unforced errors on the Philippe Chatrier show court and looked a subdued figure by the end of the match.

Gulbis struck his groundstrokes with real venom and produced some deft touches to fully deserve his first place in a Grand Slam quarter-final since 2008, also in Paris.

A man who freely admits he has wasted his talent since that breakthrough at Roland Garros six years ago, world No.17 Gulbis said earlier in the week that he was "jumping on the last-chance train" at the age of 25.

'It was the biggest win of my career' 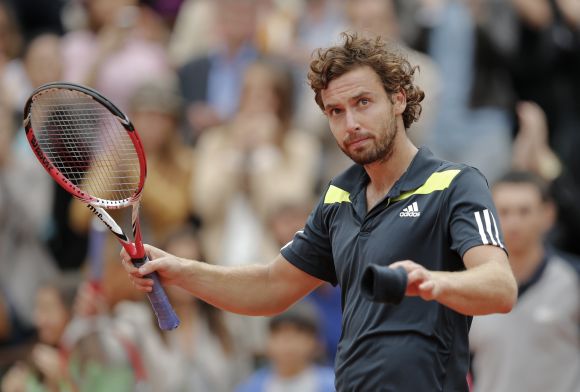 He plays Tomas Berdych of Czech Republic in the last eight after the sixth seed beat American John Isner in straight sets.

"It was the biggest win of my career," said Gulbis who has already won two titles this year. "I've been playing very well in France, winning tournaments in Marseille and Nice and hope the next one will be here."

Gulbis went 4-2 up in the first set when a Federer backhand sailed long as the Swiss peppered the court with unforced errors. Federer broke straight back as a Gulbis forehand went wide and the two players upped the tempo in the tiebreak.

Gulbis went 5-3 ahead when Federer sent a routine smash wide but as the crowd chanted "Roger, Roger" the Swiss pulled back the deficit and a whipped crosscourt forehand won him the set.

His problems of consistency returned, however, in the first game of the second set when he was in command of a service game but allowed Gulbis to come back and eventually seal a break. 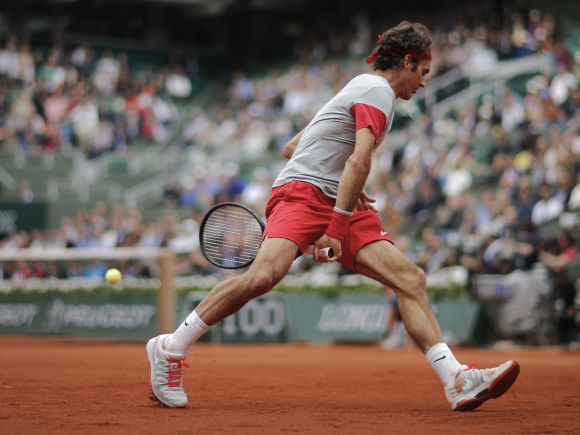 Federer broke back immediately, broke again for 5-3 and had two set points in the following game, both of which he wasted. On the first he tried a crowd-pleasing overhead but it was half-hit and Gulbis won the point before taking the game.

At 5-5 it was Gulbis's turn to waste two golden opportunities. On his second break point, the Latvian missed a simple drive down the line to win the point. He smashed his racquet on the court and stamped on it, breaking the frame.

He received a warning from the umpire and his 32-year-old opponent won the game with an ace.

In the tiebreak, Federer was leading 3-2 but a series of unforced errors led Gulbis to win five points in a row and take the second set.

Two poor shots by Federer, a backhand hooked wide and then a weak backhand into the next, gave Gulbis a 4-2 lead in the third set and he broke again to take the set on his first set point when Federer hit a forehand long.

The main question seemed to be whether the Latvian's volatile temperament would bubble to the surface as the finishing line loomed. 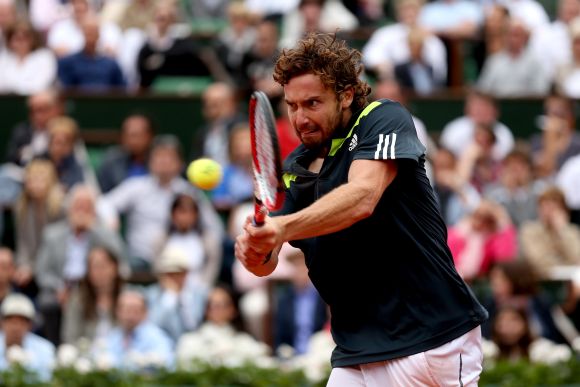 Federer's game was so off-key, he was going to need help to stay in the tournament and he received it in the fourth set when some Gulbis errors earned him a 5-2 lead.

The 25-year-old Gulbis was granted a medical treatment break and when he returned he appeared rejuvenated, breaking Federer's service immediately for 5-3, on the way to winning 10 of the next 11 points.

He had chances in the following Swiss service game too but Federer, living close to the edge, hung on to win the set on his first set point.

Gulbis broke early in the fifth set as Federer's form suffered another slump and it went with service until Gulbis served for the match.

An ace took Gulbis to match point and Federer hit wide on the backhand to give the Latvian victory. 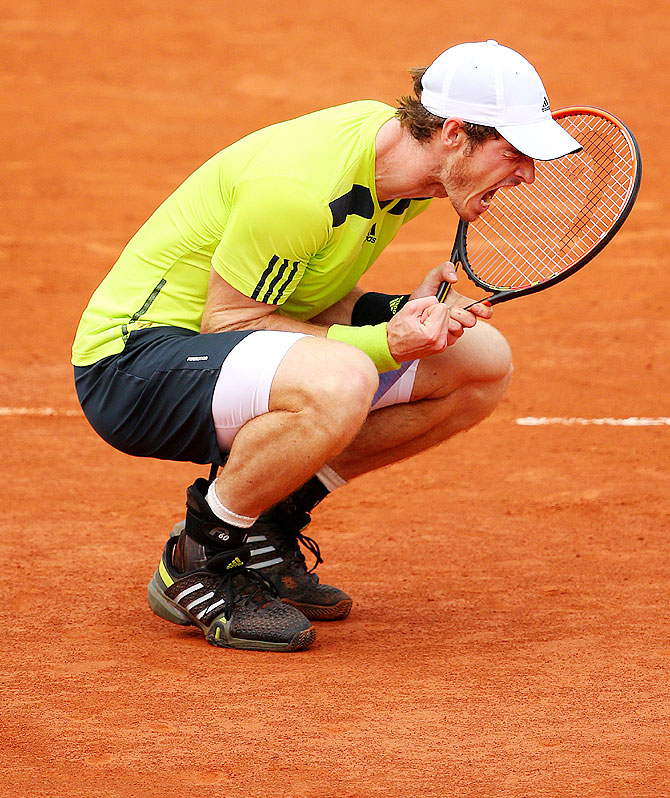 Wimbledon champion Andy Murray won a five-set marathon spread over two days against Philipp Kohlschreiber of Germany to reach the last 16 of the French Open on Sunday.

The thrilling tennis of late Saturday continued with no sign of the leg problems which had Murray grimacing in the Paris gloom. The pair resumed at two sets all and 7-7 and Murray had a match point at 9-8. Kohlschreiber saved it with a brave overhead after a great rally but Murray made no mistake on his second, driving a powerful backhand return past his opponent. 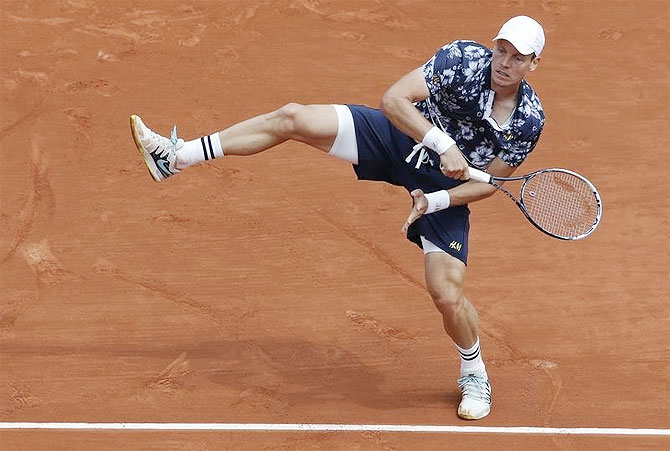 Sixth seed Tomas Berdych brushed aside American John Isner 6-4, 6-4, 6-4 in the battle of the big servers to reach the French Open quarter-finals on Sunday.

The Czech's superior all-round game was clear on Court Suzanne Lenglen as he dominated throughout.

Berdych built a winning platform by breaking the 10th seed in his first service game in each of the first two sets, both of which lasted 34 minutes.

In the third set, Isner delayed the crucial break until his second service game but Berdych was never troubled as he moved through to the quarter-finals where he will be waiting for either 17-times Grand Slam champion Roger Federer or Ernests Gulbis who play later.

Isner was the last man from the United States left in the draw.

Bouchard waltzes past Kerber into quarters 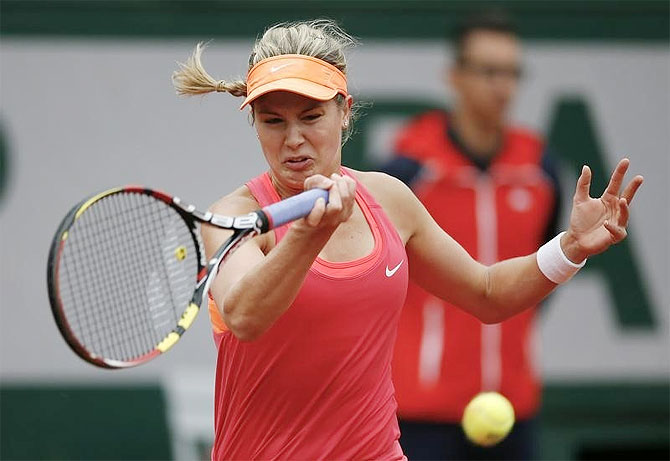 Bouchard, the 18th seed, was all over the Kerber serve from the outset and the German was caught cold. She was 5-0 down before she could draw breath in the face of the Canadian’s accuracy, movement and variety of shots.

The first set went by in just 22 minutes but Kerber’s serve was still her weak point and she was broken in the third game of the second set and again in the fifth.

Bouchard will play either claycourt specialist Carla Suarez Navarro of Spain, the 14th seed, or unseeded Ajla Tomljanovic of Croatia for a place in the last four. 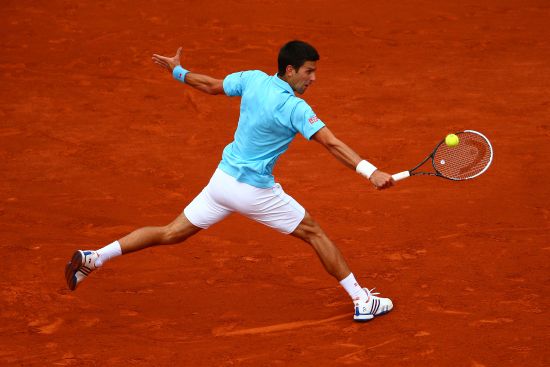 World No. 2 Novak Djokovic of Serbia continued his French Open stroll when he destroyed local favourite Jo-Wilfried Tsonga 6-1, 6-4, 6-1 on Sunday to reach the quarter-finals.

Djokovic, chasing the only Grand Slam title to elude him, was never troubled by the 13th-seeded Tsonga, who suffered an embarrassing defeat in 89 minutes one year after making it to the last four in Paris.

The Frenchman's ordeal ended on the first match point when he sent a backhand long as Djokovic reached the quarter-finals of a Grand Slam for the 20th consecutive time.

He will next face Canadian eighth seed Milos Raonic. 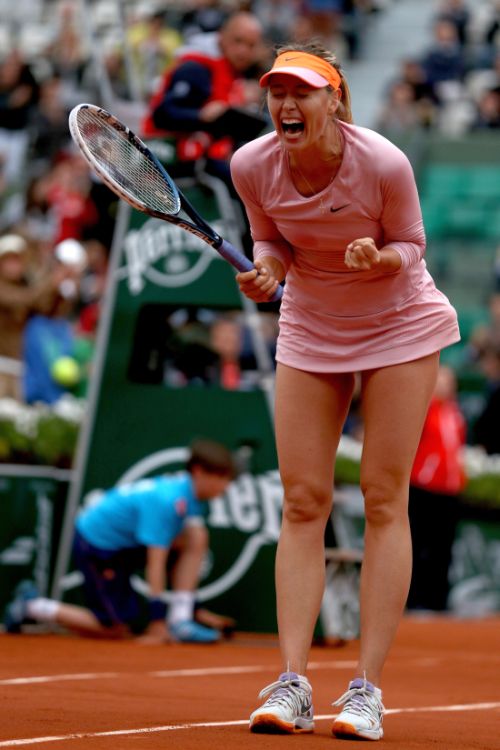 Maria Sharapova, seventh seed and last year’s losing finalist, won the last nine games of the match to sweep past Australia’s Samantha Stosur 3-6, 6-4, 6-0 into the French Open’s quarter-finals on Sunday. The 19th seed outfought and outfired the former world No.1 in the first set and held her nerve when Sharapova broke early in the second set.

But the Russian began to build a remorseless momentum to grind down Stosur with her accuracy from the baseline. Sharapova broke for a 5-4 lead to take the second set and raced to a 3-0 lead in the third after winning 17 of 20 points.

She won the match on her second match point and will play unseeded Garbine Muguruza of Spain in the quarter-finals after she beat Pauline Parmentier 6-4, 6-2.

"It was so difficult in the beginning, Samantha was playing so well, but I got energy from the crowd," Sharapova said.

"I'm so happy to be back in the quarter-finals, it's such a special tournament for me. "It's a big step but when you get there it will get more difficult. Hopefully I will raise my level."

Sharapova is favourite to win the title after the early exits of defending champion and world No.1 Serena Williams and second seed Li Na, although Simona Halep of Romania is the fourth seed and in great form.