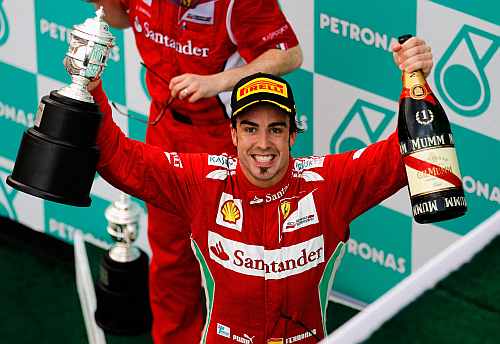 Alonso survived a lengthy rain suspension, a rash of spins and mishaps and a strong challenge from Sauber's Sergio Perez to finish ahead of the Mexican driver, with McLaren's Lewis Hamilton third, reports AFP.

Spain's Alonso, a two-time world champion, was no one's pre-race favourite in the clunky F2012, but he emerged from the chaos caused by torrential rains at the head of the pack and doggedly clung on for victory.

Perez pushed hard for his first win and looked set to steal victory from Alonso until he overshot a turn on lap 50.However, he still managed his maiden trip to the podium. 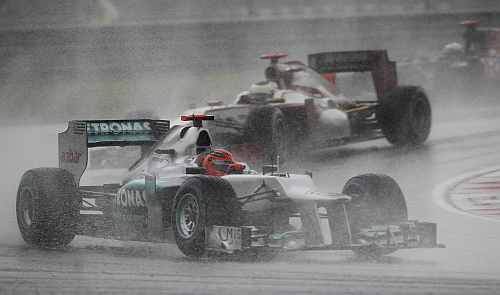 But there were no points for McLaren's Jenson Button, who won last week's season-opener, after he collided with India's Narain Karthikeyan and dropped to the back of the pack, finally coming in 14th.

After days of mostly dry weather, black clouds rolled over Sepang and the rain fell, right on cue, as the Malaysian anthem was played.

Pole-sitter Hamilton, who was passed by Button at the front of the grid in Australia last week, survived a furious challenge from his team-mate at the start and he emerged from the first corner with his lead intact.

But as the cars kicked up plumes of spray, it was only a matter of time before they started spinning and the first casualty was wet-weather maestro Schumacher, who dropped down the field.

Rain came down in buckets 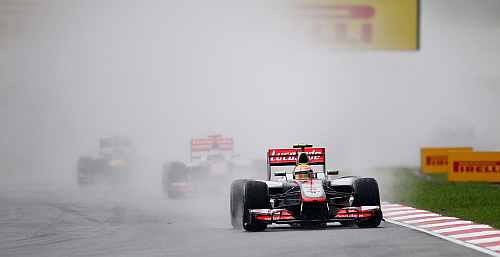 The rain immediately turned torrential and Ferrari's Felipe Massa was the first in for wet-weather tyres, followed immediately by the other drivers in a chaotic few minutes in the pit lane.

Lotus's young Frenchman Romain Grosjean span into the gravel and out of the race, Mercedes' Nico Rosberg went off-course and Button radioed that the last sector was "like a lake" before the safety car came out on lap seven.

And as the rain came down in buckets, the race was suspended shortly afterwards, evoking memories of Button's storm-shortened victory in 2009.

But less than an hour later they were back out and once the safety car withdrew for lap 14, it was the signal for some frenzied action as drivers dived into the pits for intermediate tyres on the drying track. 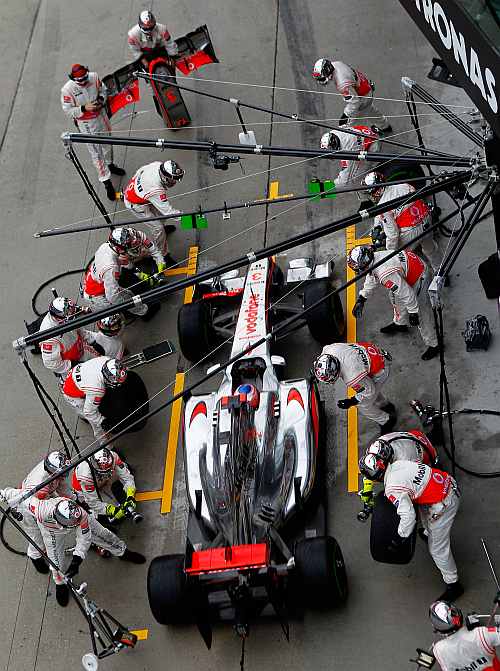 Image: McLaren's Jenson Button stops for a pitstop during the Malaysian Formula One Grand Prix at the Sepang Circuit
Photographs: Paul Gilham/Getty Images

Button smashed up his front wing in the collision withHRT's Karthikeyan and needed his third pit stop, pushing himway down to 21st.

Alonso was driving his unloved Ferrari to the limit, but his big lead was whittled down to just a couple of seconds by Perez before both joined the rush to pit for slick tyres around lap 40.

Perez had an amazing race 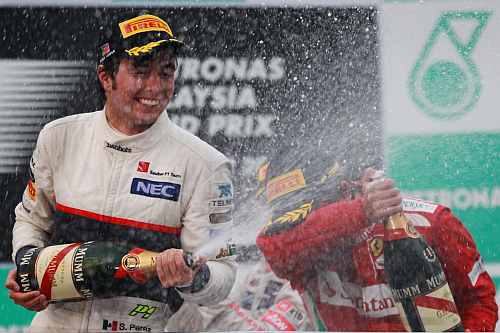 Image: Sergio Perez celebrates on the podium after finishing second during the Malaysian Formula One Grand Prix at the Sepang Circuit
Photographs: Mark Thompson/Getty Images
When they resumed Alonso was seven seconds in front but Perez was soon back on the Spaniard's tail, setting up a gripping dogfight in the closing laps -- distracted only by a nasty puncture for Vettel, who slipped back.

But when Perez went off-course with six laps to go, Alonso was able to claim his first win since the British Grand Prix last July -- and conclude a remarkable weekend for the Ferrari camp.