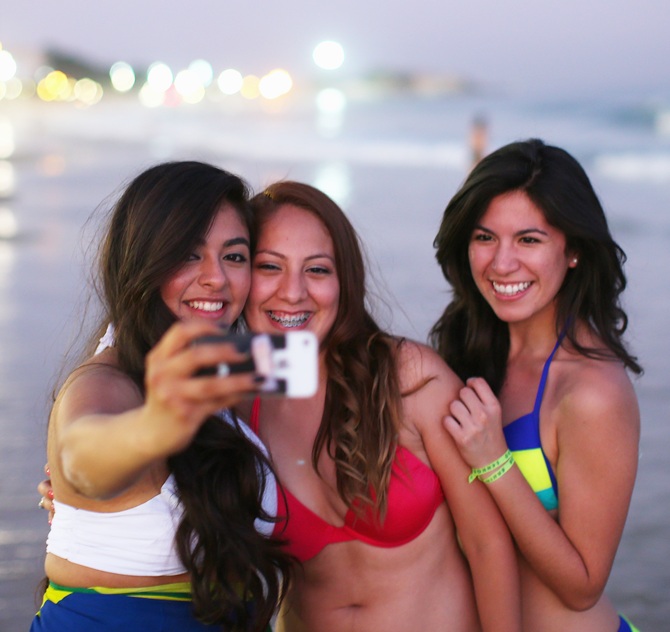 The World Cup, which kicks off this week in Brazil, will be the most tweeted event ever, a Twitter Inc executive said on Tuesday.

Brazil's Twitter director Guilherme Ribenboim said the volume of messages sent during the month-long competition starting on June 12 will dwarf the 150 million tweets sent about the 2012 London Olympic Games.

"The World Cup will take all that to a whole different level," Ribenboim said.

"For Twitter this will be the biggest event ever."

With 255 million users around the world, Twitter is a popular platform for commenting on global events such as sports. 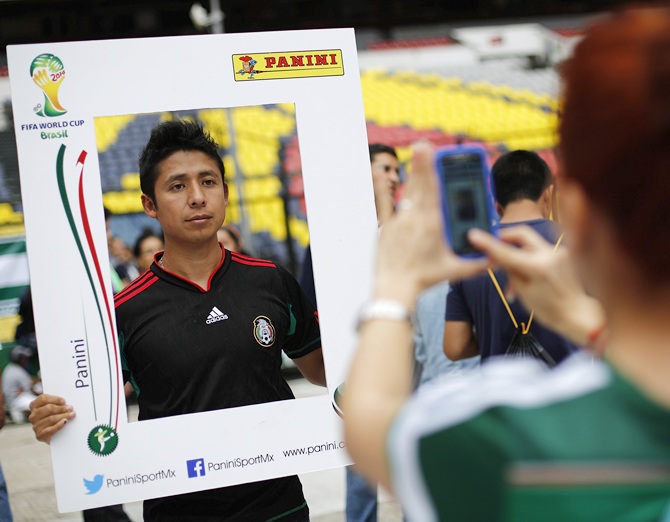 Image: A man has his picture taken with a frame
Photographs: Bernardo Montoya/Reuters

The London Olympic Games showed people like to tweet about what they see at a stadium or watch on TV, making the microblog service more attractive for advertisers.

FIFA, soccer's governing body, estimated 3.2 billion people, or almost half the world's population, watched at least part of a game during the 2010 World Cup in South Africa.

The tournament comes at a good time for Twitter, which has seen stagnant user growth in its first two quarters as a public company, with its stock trading near its post-IPO low. 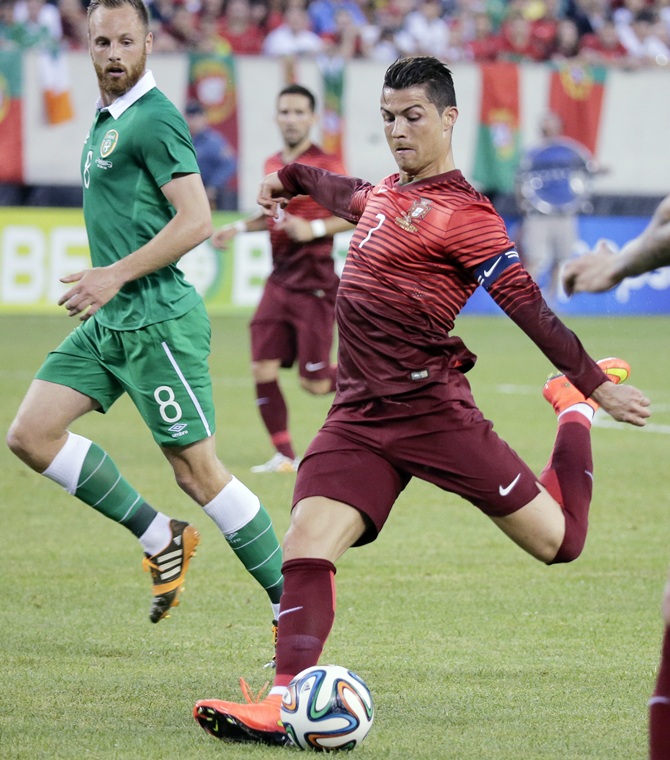 "Most companies pouring huge amounts of money into advertising during the World Cup want to amplify their investment by reaching people through Twitter and engaging with them," Ribenboim said.

The executive dismissed concerns about Brazil's poor telecommunications infrastructure, which could affect people's ability to tweet from the stadiums.

All 32 teams participating in the World Cup have official twitter accounts, as do most of their soccer players. Portugal's Cristiano Ronaldo leads the pack with 26.6 million followers, tailed by Brazil's Neymar with 10.8 million and England's Wayne Rooney with 8.8 million.

Ribenboim said Twitter has been working closely with soccer federations and even coaching players on how to use the social media.

"We have been showing them how they should use the platform, how to use hashtags, how to engage with their fans." 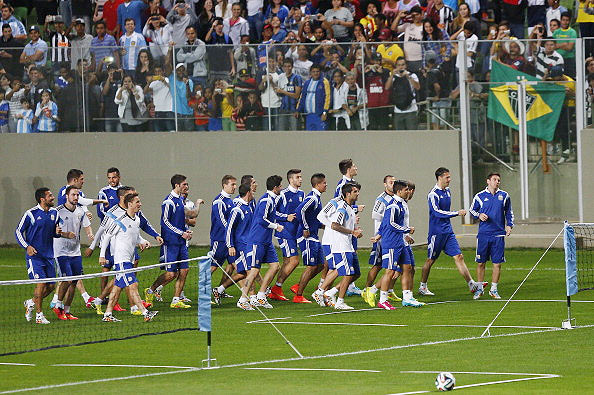 Image: The Argentina team gets booed by Brazil fans as they head for training at Independencia Stadium in Belo Horizonte on Wednesday
Photographs: Getty Images

Argentina got an early taste of what to expect from their Brazilian hosts at the World Cup when they were welcomed with jeers and whistles in their first open practice session on Wednesday.

Some 5,000 fans attended the session in Belo Horizonte's Independencia stadium with the locals giving their fierce rivals a noisy reception ahead of the tournament start on Thursday.

The decibel levels reached those of a competitive match when Argentina came out onto the pitch but the players, including Lionel Messi and Angel Di Maria, kept their cool and briefly waved to their own fans in the crowd before turning their focus to their training.

Argentina, who along with Brazil are the South American favourites to lift the trophy, kick off their tournament against Bosnia on Sunday.

"The team down there on the pitch will bring the World Cup back home," Sebastian Suner from Rosario, who was draped in an Argentine flag, told Reuters. 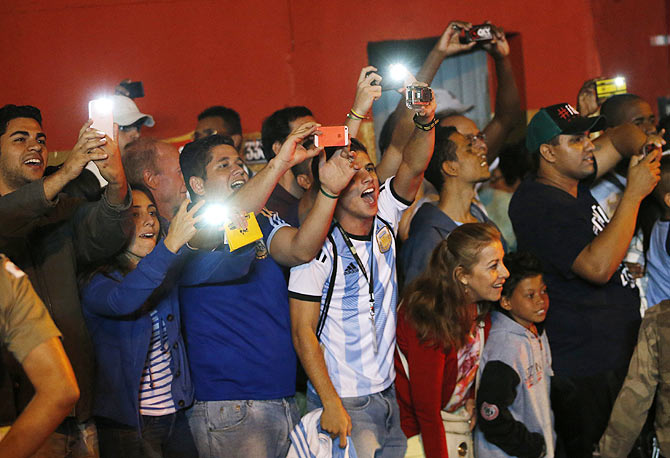 Image: Fans click pictures of Argentina's team bus upon their arrival at Independencia stadium before the start of a training session on Wednesday
Photographs: Leonhard Foeger/Reuters

"Listen to the boos. It can't get any sweeter than lifting the trophy in Brazil in a month's time," the 22-year-old said with a grin.

Tight security was in place with streets around the venue closed and helicopters hovering over the stadium, which hosted World Cup matches at the 1950 tournament including England's shock loss to the United States.

"Let them come here and train. They will find out sooner or later that we are the kings in this tournament," 27-year-old Brazil fan Luis Goncalves, who lives near the stadium, told Reuters.

Brazil kick off proceedings against Croatia in the tournament opener on Thursday. 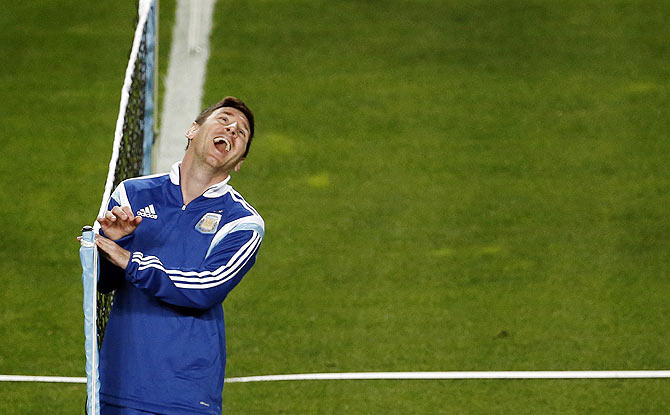 Messi scrapped plans to rent a mansion for his family outside the city of Belo Horizonte for the duration of the World Cup, according to the online edition of O Estado de S. Paulo newspaper.

His new contract with Spanish club Barcelona will reportedly earn the four-times World Player of the Year a net annual salary of $27 million.

Messi and his staff thought the 150,000 reais ($67,600) rent for a month-long stay in the 21,500-square foot mansion was expensive, Estado said. In addition to proposing a lower rent, Messi's entourage pressed the landlord to put up an enclosure for privacy purposes.

A source with knowledge of the negotiations confirmed some of the terms, adding that the talks broke down in early May.

Messi's staff made an offer that "didn't please me. The deal didn't go through," Paulo Nassif, the mansion's owner, told Estado.

Efforts to reach Nassif and Messi's father Jorge Messi, who runs all his business affairs, were unsuccessful. A spokesman for the Argentine team declined to comment.

The mansion has seven suites, 13 restrooms and 86,000 square feet of land next to a lagoon. Messi decided instead to rent a house in Rio de Janeiro for his family, Estado said.

The Argentine squad is based for the World Cup in Belo Horizonte, Brazil's third-largest city.

Real estate prices and rents have soared in Brazil in recent years, with prices in major cities like Rio and Sao Paulo often in the same league as New York, London and Paris. 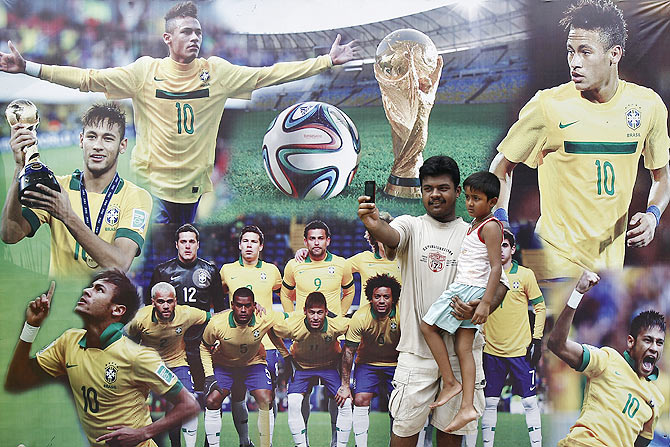 Image: A man takes a selfie with a child, in front of pictures of Brazilian soccer players along a road in Kolkata on Tuesday
Photographs: Rupak De Chowdhuri/Reuters

Football is a passion for Kolkata’s Pannalal (81) and Chaitali (71).

The love for the sport  has taken this couple to eight previous World Cups and the duo is now heading to Brazil for some exciting footballing action.

It all began in 1982 when the football-crazy couple, who live in a narrow bylane at Kidderpore in the south-western part of the city, when they spent one summer with a friend in London and decided to go to Spain to watch the World Cup.

"We have not missed a World Cup since then," the Chatterjees, who leave Kolkata on Tuesday said.

Four years later their excitement knew no bounds when they were witness to Diego Maradona's infamous ‘Hand of God’ goal and later bumped into Pele. The couple describes the anecdotes as two of their fondest memories till date.

"It's difficult to explain in words how much we love the sport," the Chatterjees said.

The couple has been been to Mexico, Italy, then America, the fifth was France, then Germany, then Japan-Korea, then South Africa and now Brazil.

A former Kolkata Port Trust employee, Pannalal gets a small pension of about Rs 7,500 and runs a saree business as they save money every month to meet their expenses every four years.

The couple say they always take the Indian flag along on their sojourns but feel embarrassed when asked about India’s chances ar the World Cup by fellow football fans. "We have no answer to their queries... But we tell them we are proud Indians," Pannalal said.

Ardent supporters of Brazil, it will be a dream come true for them to witness the extravaganza this time.

"Brazil is the the Mecca of football. This was our only wish to watch World Cup in Brazil. We don't know whether we will be able to go the next time," he added.