Colombia are on the verge of a berth in the knock-out round. It is probably the end of an era for the Spanish La Roja and a new beginning for Colombia, says Mauktik Kulkarni

It is amazing what two decades can do to a city. Medellin, nestled in the Aburra valley in northern Colombia, is a bustling city of a few million people that is considered one of the science and technology capitals of Latin America today. One of the major tourist attractions of Colombia, it offers great food, breath-taking views from the surrounding mountains and a young, throbbing nightlife.  It was just 1994 when it was known as the murder capital of the world. It was one of the most dangerous cities in which 5-6000 people were being murdered annually. One such unfortunate soul was Andres Escobar. It happened during the FIFA World Cup being held in the United States. And Andres was the star defender of the Colombian national football team, widely considered one of the favorites to win the 1994 World Cup. He was not related to Pablo Escobar, the notorious kingpin of the largest drug cartel in the world ever. However, the sordid saga – full of narcotics, murders, politics and football – that brought these lives together is a complex morality play.

As teenagers, both Andres and Pablo roamed the streets of Medellin. In the ‘60s and ‘70s, Pablo started as a petty thief and grew up to become the undisputed king of cocaine. Running his business out of buildings and warehouses in Medellin, he was bringing in upwards of $50 million a day through his worldwide drug smuggling operations. He was ruthless when it came to bribing governments, eliminating rivals from other cartels and growing his business. But when it came to the poor people living in the slums of Medellin, he was equally generous.

A Colombian version of Varadrajan Mudaliar; only ten times bigger.  He paid for building housing projects for the poor, supported education of the kids and discouraged them from using cocaine. In football, he found a perfect marriage of the good and bad sides of his personality. Through the ownership of Atletico Nacional, a club football team in Medellin, he found an easy way to convert millions of dollars from black to white. And by promoting football as a way of keeping the poor kids out of the bloody streets of Medellin, he could buy heaps of goodwill from the locals.

Andres was one of those kids.  He came from a middle class Medellin family; not from the slums. But football was his escape from the dark reality of the narco-business surrounding him. He was a thorough gentleman and, as a member of the Atletico Nacional team, won several national and regional tournaments. A gifted player, he could have easily joined one of the prestigious European clubs.  What kept him, and others talented footballers, in Colombia were the fat salaries being funneled in through the thriving drug trade.  It is ironic that the cocaine business that gave Colombia worldwide notoriety was instrumental in building a top-notch football program in the country. So much so that during the 1994 World Cup qualifiers, Colombia thumped Maradona’s Argentina 5-0 and entered the tournament as one of the title contenders.

With the help of the CIA, Pablo Escobar was killed in an encounter by the Colombian police in 1993.  But his long shadow still remained; on the drug trade as well as Colombian World Cup squad. Some of the team members were openly sympathetic towards his efforts in building a world-class football program, one of the few sources of national pride in a country ravaged by drug wars.

The 1994 World Cup campaign started on a disastrous note for Colombia. They lost the first match to Romania and and second to the United States, before beating Switzerland. More importantly, Andres Escobar scored an own goal during the crucial match against the United States. After Andres went back to Medellin, with the World Cup still in progress, he was brutally gunned down outside a nightclub in the middle of the night. Had it been one of his team members more directly connected to the drug trade, it would not have surprised the world. The murder of someone as clean as Andres, though, sent shock waves through the football fraternity. Like the more recent Nirbhaya case in India, it touched a raw nerve in Colombia.


Image: Colombian supporters watch the first round World Cup match between Colombia and Tunisia over a Colombian flag with the inscription: 'Colombia-Peace,' placed next to a portrait of player Andres Escobar in Montpellier
Photographs: Reuters

Fast forward twenty years and walking around the city of Medellin today is an interesting experience. As a stark reminder of Pablo Escobar’s drug empire, you can visit his grave and take the ‘Pablo Escobar’ tour to see some bombed out buildings. The tour also takes you to the house owned by his mother where his brother still lives. 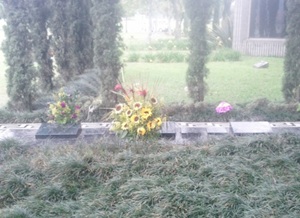 You can still find an occasional dealer peddling cocaine on the streets, but the city has changed its face. It has become the start-up hub of Colombia. With the taint of drug cartels gone and the country being viewed as one of the economic engines of Latin America, Colombia has rebuilt its national character and, with it, the national football program.

After a listless 1998 World Cup campaign, the Colombian national team has spent more than a decade in football wilderness. It is now back with a bang.

It is probably the end of an era for the Spanish La Roja and a new beginning for Colombia. Most of the players of the Colombian national squad were toddlers or not even born when Andres Escobar was gunned down in cold blood. Medellin has reinvented itself as a hub of science and technology.

As they enter the knock-out stage with emphatic victories over Greece and Ivory Coast, their fast-paced, energetic style of play with one-touch and back-heel passes will be a treat to watch.

Valderrama, Higuita and Andres have handed over the baton to exciting players like Guiterrez, Aguilar and company. It would be great to see them in the quarter finals or even a surprise entry into the semi-finals.

No drugs. No murders. No morality plays. Just football!

Mauktik Kulkarni is an author, movie-maker, travel buff and sports enthusiast. He will be traveling to Brazil for the World Cup and report for Rediff.com from there during the knock-out stages.