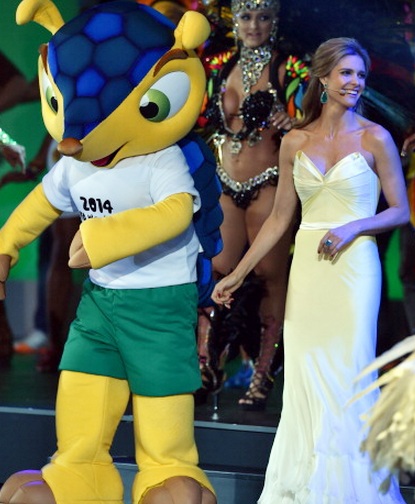 When FIFA president Sepp Blatter swept into the chrome and marble lobby of the Grand Hyatt hotel in Sao Paulo earlier this week, he did not look like a man fighting to salvage the reputation of soccer's ruling body that he has led for 16 years.

The 78-year-old Swiss smiled as he greeted soccer officials from around the world who had waited to shake his hand, and he even had warm words for a small group of reporters wanting to speak to him.

"I like you very much," he told them, before apologising that he had to rush off and get back to work.

Blatter's mood had appeared far darker a few hours earlier, when, addressing the African and Asian soccer confederations in the Brazilian city on Monday, he railed against those he said wanted to destroy FIFA.

He also suggested that criticism of FIFA handing the world's most lucrative and most-watched tournament to Qatar in 2022 stemmed, at least in part, from racism.

'They want to destroy us' 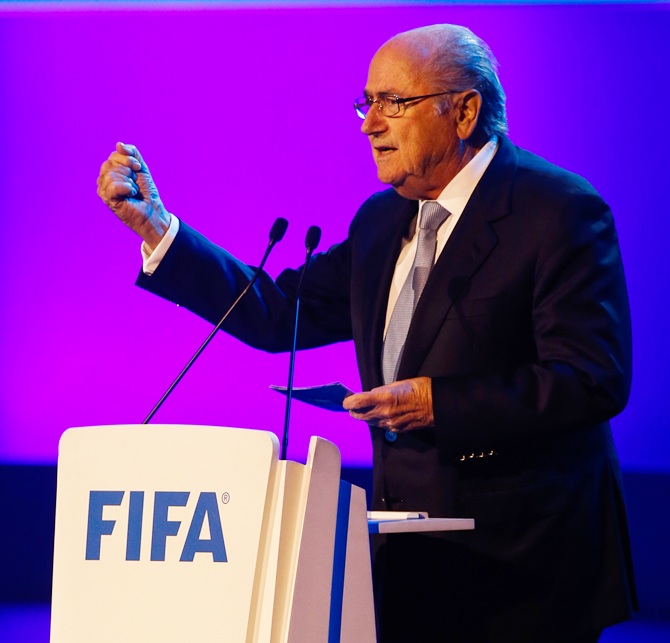 "Once again there is a sort of storm against FIFA relating to the Qatar World Cup," he told African delegates, after the Sunday Times alleged, not for the first time, that a former Qatari soccer official had essentially tried to buy the tournament for the tiny Gulf state.

"Sadly there's a great deal of discrimination and racism and this hurts me."

The extraordinary outburst just three days before Brazil gets the World Cup underway against Croatia in Sao Paulo reflected the gravity of the charges against FIFA, which some commentators suggest could threaten the future of Qatar's bid.

At the Asian meeting, Blatter was equally combative. 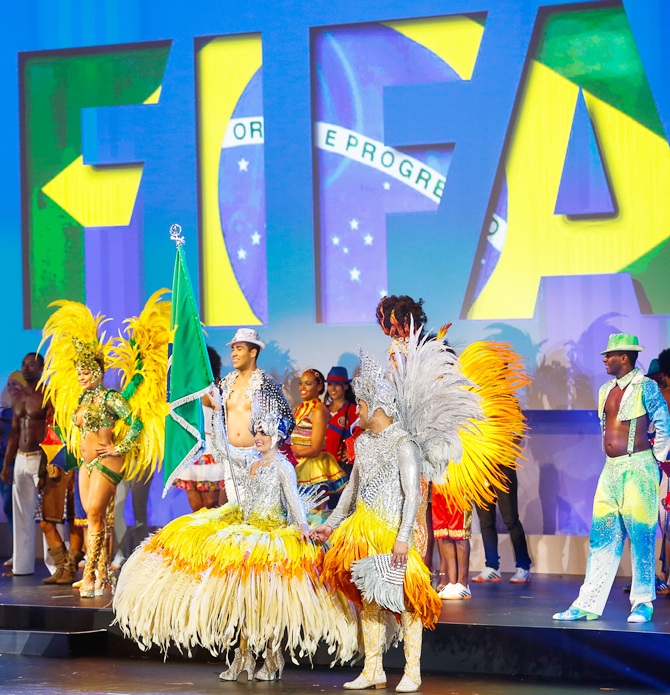 Ahead of Wednesday's annual FIFA Congress in Brazil's business capital, Blatter has moved to seize the initiative after a slew of allegations over corruption threatened to overshadow the biggest sporting show on Earth.

In doing so, he also consolidates his position ahead of his expected re-election bid for a fifth term at the helm of an organisation which runs world soccer and controls billions of dollars in advertising and media rights.

On Monday, delegates of both the Asian and African confederations, which broadly supported Qatar's bid, stood to applaud Blatter after he spoke, and between them they would virtually guarantee him victory if they voted unanimously.

On Tuesday, delegates from North and Central America, the Caribbean and Oceania also publicly supported his proposed candidacy, giving him a cushion numerically.

Summing up the thinking among his backers, Confederation of African Football (CAF) president Issa Hayatou told Reuters: "Why would we want to change the president now? FIFA is strong. He is the right man to lead us forward."

Qatar may be safe 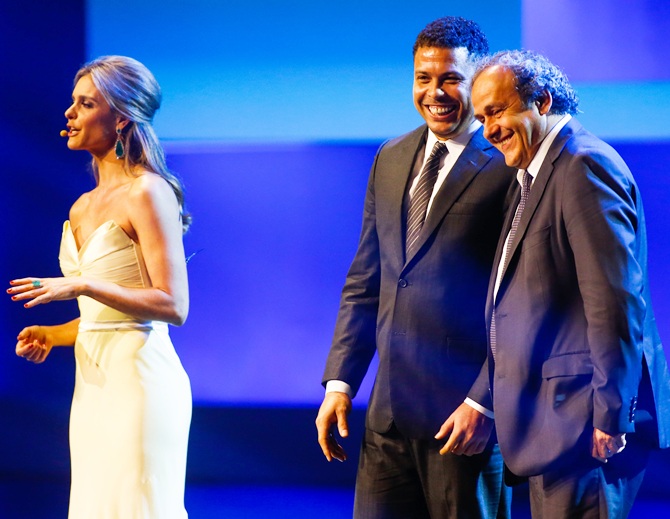 On the downside for Blatter, Europe's powerful soccer body UEFA launched a broadside against him.

"FIFA has an executive president and you are not making things easy for yourself and I do not think you are the man for the job any longer," said Michael van Praag, head of the Dutch Football Association.

UEFA head Michel Platini has said he is considering standing against Blatter in next year's election in what would be a heavyweight contest worthy of a World Cup final. As things stand, however, Blatter has the advantage.

Asked by Reuters in Sao Paulo how he felt about the support he enjoyed in spite of the Qatar problems, Blatter replied: "I'm doing my job and you are doing yours." He made no further comment for this article.

Some FIFA insiders, who were not willing to speak on the record, said they believed events in Sao Paulo pointed to the increasing likelihood that Qatar would not have the World Cup taken away from it.

To do so would be a huge blow to the organisation's reputation, not to mention that of its president.

"Mr Blatter knows there is an election next year and there is little doubt he is going to stand for another term," said a senior FIFA official in Brazil.

"If he controls the (African and Asian) confederations' votes, and stands by Qatar, there is very little chance of him losing this vote," he told Reuters.

A member of FIFA's executive committee added: "If he wants to be president and keep faith with the delegates who are clearly backing him, the World Cup will be in Qatar. It will not be moved."

But the final decision on Qatar does not rest solely with Blatter, clouding the fate of the bid.

'If he finds corruption, Qatar could be stripped of the Cup' 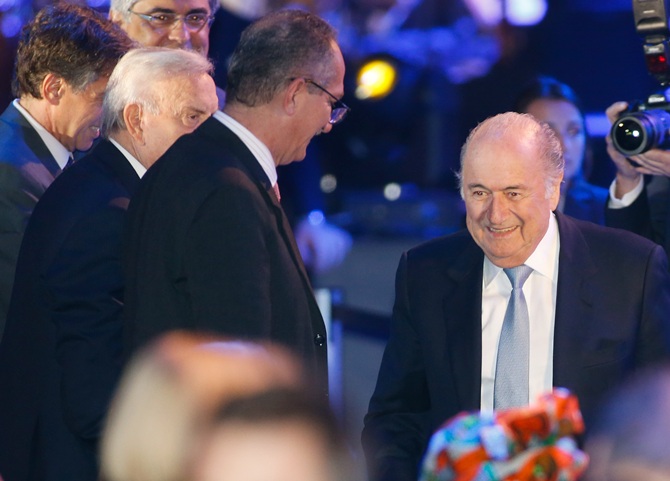 It also depends on Michael Garcia, head of FIFA's investigatory chamber of their Ethics Committee, who has just concluded his report on alleged corruption surrounding FIFA officials which has taken him two years to complete.

Its completion coincided with a Sunday Times report based on ‘millions of documents’, some of which it said linked payments by former FIFA executive committee member Mohamed Bin Hammam to officials as part of a campaign to win support for Qatar's bid.

Bin Hamman has not commented on his involvement since he was banned for life from football in 2012, while Qataris working on the project now say he was not a part of its official bid.

Garcia will submit the report to German judge Hans-Joachim Eckert, the head of the Ethics Committee's adjudicatory chamber, in around six weeks.

If he finds corruption, Qatar could be stripped of the Cup, or at least face a challenge to its position as host either through a re-vote or through other processes.

And several key sponsors who have spent hundreds of millions of dollars to associate their names with the World Cup have called for a thorough investigation, raising the heat on FIFA and Blatter. 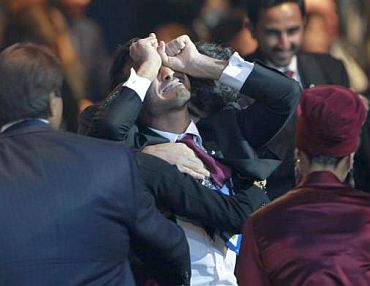 Several sources with knowledge of his thinking say Blatter did not want Qatar to hold the soccer World Cup in the first place, and would have preferred to see it return to the United States which last hosted it in 1994.

Some people say they were stunned when Blatter pulled Qatar's name out of an envelope in 2010.

They wondered why it had gone to a country with a population of two million people, with little soccer heritage and where summer temperatures average around 40 Celsius (104 Fahrenheit).

FIFA's own inspection team, which examined all the bids in forensic detail following site visits during 2010, advised decision-makers not to back Qatar citing mainly the summer heat.

Blatter said last month it had been ‘a mistake’ to award the finals to the country in the summer due to the heat, but later said his quote in French had been mistranslated.

He has acknowledged that the tournament will probably have to be held in the winter, leading to huge disruption for soccer leagues around the world and also sport generally for at least two years either side of a rescheduled World Cup.

The only person formally to declare his candidacy in the race for FIFA's top seat is Jerome Champagne, a former FIFA deputy secretary general.

He said that despite the aura of power and impenetrability that surrounds Blatter in many soccer officials' eyes, he cannot control everything, as the shock 2010 vote showed.