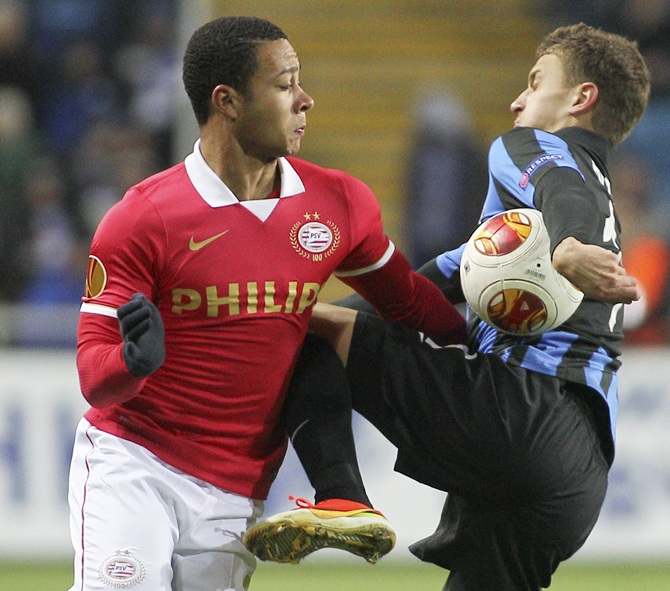 PSV Eindhoven's disappointing season took a turn for the worse as they went out of the Europa League after losing 1-0 at home to Ukrainians Chernomorets Odessa, who pipped them to second place in Group B on Thursday.

Former European Cup winners PSV, languishing 10th in the Dutch league, needed a point to make the last 32 but were undone when Odessa's Franck Dja Djedje netted a second-half header.

With 18 teams having already booked places in the knockout round as group winners or runners-up and eight sides dropping into the competition from the Champions League, Thursday's action concentrated on the six remaining places up for grabs.

Maribor, SwanseaCity, Maccabi Tel Aviv, Dynamo Kiev and Slovan Liberec all joined Odessa in wrapping up the runners-up spots in their groups to secure a place in Monday's draw.

Advantage was wiped out 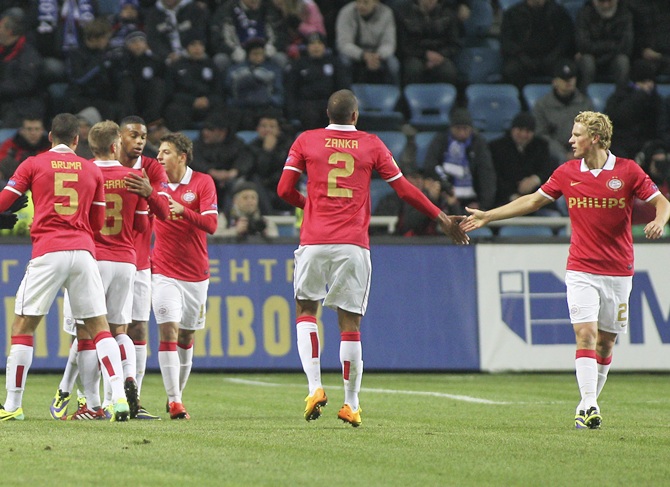 Salzburg won 3-0 at home to Danish side Esbjerg to finish with a perfect 18 points in Group C and Tottenham Hotspur also recorded a sixth straight win in Group K by beating Anzhi Makhachkala with striker Roberto Soldado netting a hat-trick.

PSV lifted the continent's prized trophy in 1988, 10 years after winning the Europa League's predecessor, the UEFA Cup, but the current side is a pale imitation of those successful teams and stuck in the middle of a terrible run of form.

Locked together with Chernomorets Odessa on seven points heading into the final round of Europa League group matches, PSV had the edge with a better head-to-head record.

That advantage was wiped out, however, when Sito Riera, who was later sent off, crossed from the right and Dja Djedje powered in an excellent header from near the penalty spot.

The Dutch side have now won one of their last 11 games and have lost five of the last six, cranking up the pressure on coach and former Netherlands international Phillip Cocu. 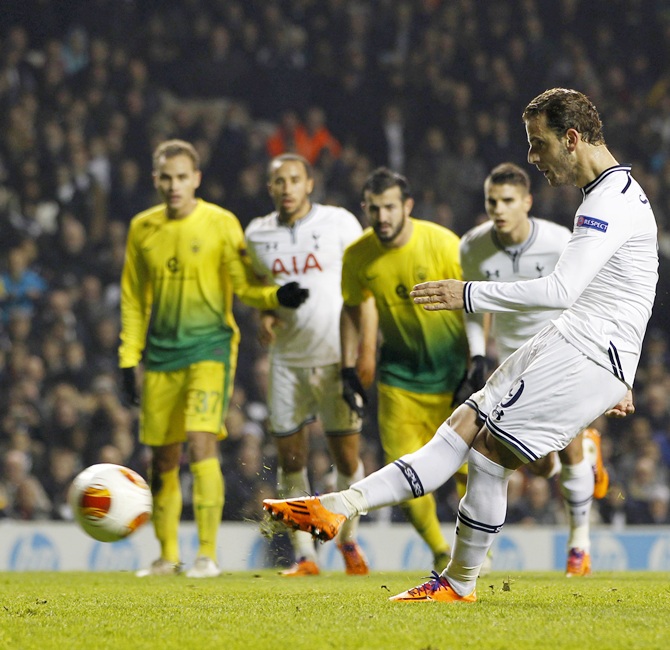 Twice UEFA Cup winners Tottenham have also struggled for consistency domestically, but a string of impeccable performances in Europe have helped them cruise through the group by winning every game, scoring 15 and conceding two.

Even striker Spaniard Soldado, who has struggled for goals in the league this season after a 26 million pounds move from Valencia, found his scoring touch, with three goals, including a penalty, to round off qualifying in style.

Maribor started the day bottom of Group D but a 2-1 win over visitors Wigan Athletic and a heartbreaking defeat for Belgians Zulte Waregem at home to Rubin Kazan, meant the Slovenians leapfrogged both teams into second to reach the knockout stages.

Maribor fell behind to English second tier team Wigan when Jordi Gomez scored from the penalty spot after 41 minutes.

But a second penalty turned the match as Wigan's Chris McCann was sent off for handling in the box and Dejan Mezga equalised on the rebound after his initial spot kick was saved.

Maribor and Waregem finished the group locked together on seven points but the Slovenians went through courtesy of a better head-to-head record.

Dynamo Kiev on top in their Group Welsh side Swansea sneaked through from Group A despite losing 1-0 at Swiss team St Gallen, while Maccabi Tel Aviv won 1-0 against visitors Girondins Bordeaux to qualify second in Group F.

Swansea would have gone out had Kuban Krasnodar beaten group winners Valencia away, but the Russians could only muster a draw and finished two points adrift in third.

Dynamo Kiev came out on top in their Group G qualification shootout with Rapid Vienna, winning 3-1 at home to finish second on 10 points, four clear of their opponents who had to win to progress.

Rapid's hopes were raised when Terrence Boyd put them ahead from close range after six minutes, but the lead was short-lived as Kiev levelled through Jeremain Lens 16 minutes later, chesting down a ball from the right and steering it home.

Oleh Gusev grabbed a second to tilt the tie in their favour soon after and a Miguel Veloso free kick wrapped up the match.

Slovan Liberec won 2-1 at Estoril to finish second and edge out Freiburg who lost 2-0 at home to Sevilla in Group H.