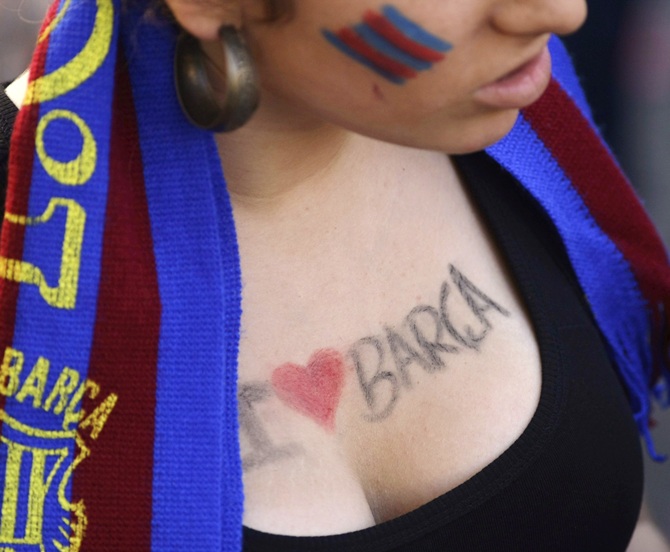 Rediff.com brings you a selection of Spanish words and phrases to help explain the intense rivalry between Real Madrid and Barcelona, played out in the El Clasico.

The world's richest clubs by income meet at Real Madrid’s Bernabeu stadium in the La Liga on Sunday.

Table-toppers Real could take a big step towards winning the title.

Barca and their fans are known as Cules, which means 'arses' in Catalan.

At one of the club's first stadiums in Calle Industria, supporters used to sit on the outer wall watching matches and all that passers-by could see when they looked up from the street was a row of backsides, which prompted the nickname.

Real is known as the Merengues because their distinctive all white kit (shirts, shorts and socks) resembles the famous pudding made from egg whites and sugar. 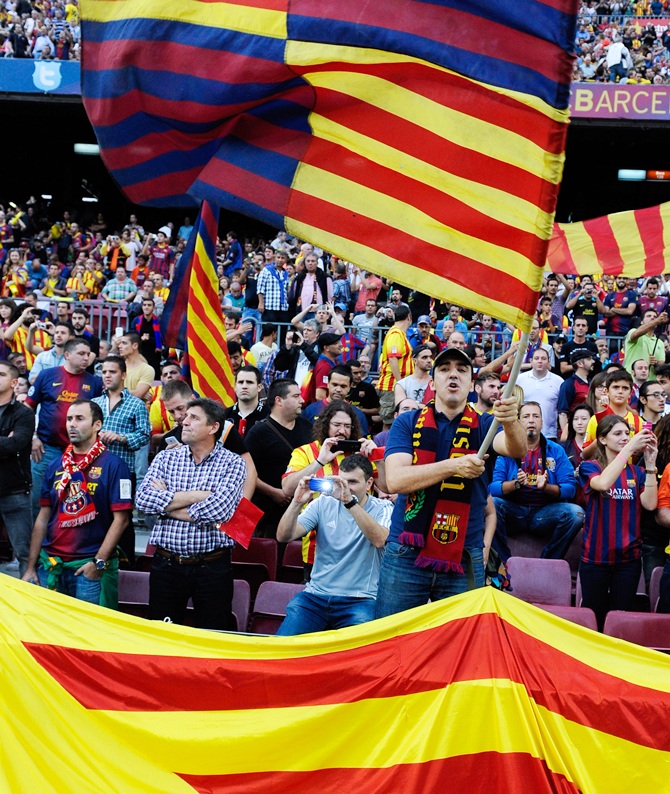 The Madrid-based sports press have in the past accused Barcelona of falling victim to Canguelo, which literally means being scared stiff that Real Madrid will chase up behind them to steal the league title.

In 2007, Fabio Capello's Madrid famously overhauled Frank Rijkaard's Barca side to snatch the title on the final day of the season, prompting accusations that Barca had bottled it.

This time, with Real leading the standings, it is the Barcelona-based papers that have adopted the word. 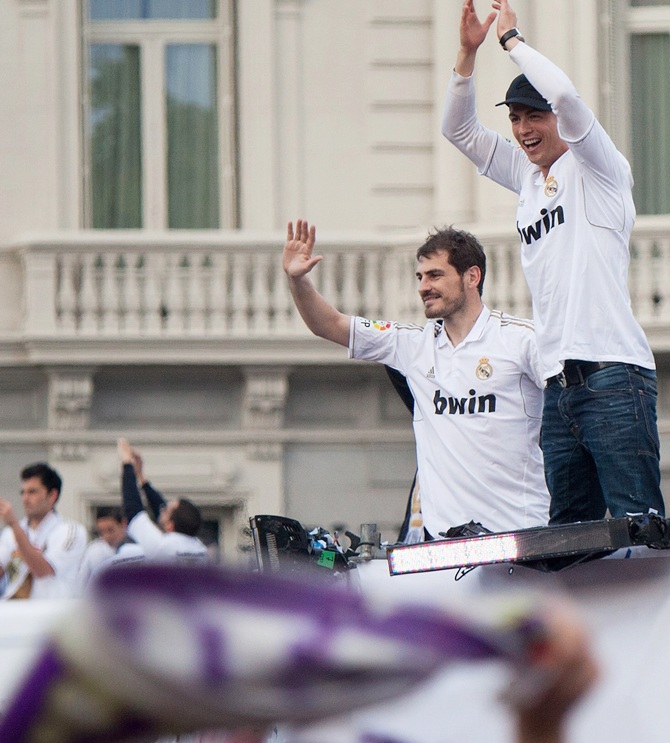 Barca's 5-0 La Liga hammering of Real at the Nou Camp last season had home players and fans waving a hand in the air with the fingers spread in celebration of the five goals -- la manita, or 'little hand'.

That result, and the 6-2 thrashing Barca handed out at the Bernabeu in 2009, are two of the most humiliating reverses suffered by Real Madrid in recent times.

In the mid-1990s, Dutch coach Johan Cruyff led Barca to a crushing 5-0 league drubbing of Madrid at the Nou Camp, when Brazil striker Romario netted a hat-trick.

Catalan joy was relatively shortlived, however, as Real beat them 5-0 at the Bernabeu the following season, thanks to an Ivan Zamorano treble. 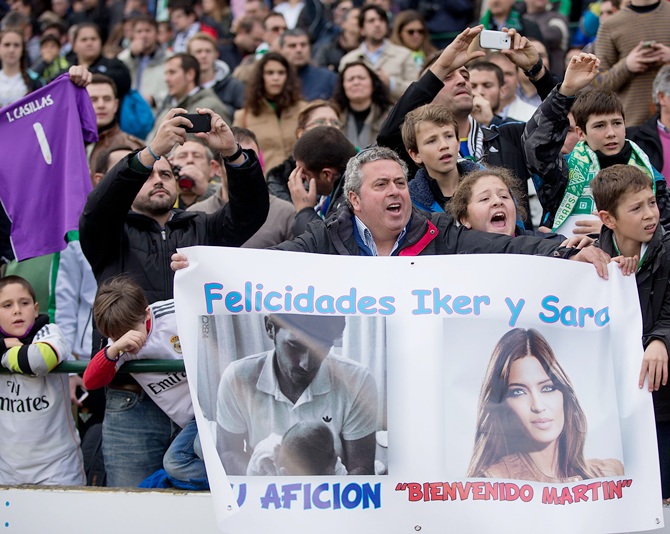 Conspiracy theories have flourished over the years about biased refereeing favouring either team.

Allegations of favouritism shown towards Real by referees during the dictatorship of Francisco Franco have given way recently to Barca being accused of having a helping hand.

The theory that Barca backed the re-election of Angel Maria Villar to the presidency of the Spanish soccer federation (RFEF), while Real supported a rival candidate, has given rise to the term Villarato, which is used every time Madrid fans think Barca have had some kind of favourable treatment. 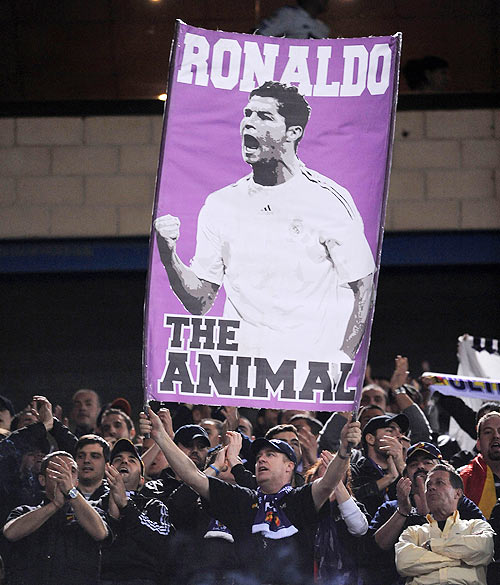 At the end of the Spanish Super Cup in 2011, with Barca winning 3-2 at the Nou Camp, a reckless challenge by Real defender Marcelo on Barca's Cesc Fabregas sparked a mass brawl on the touchline.

In the middle of the melee, the then coach of Real Madrid, Mourinho snuck up behind Barcelona's assistant coach Tito Vilanova and gouged a finger in his eye. Vilanova responded by cuffing Mourinho round the back of the head. The referee did not see el dedo de Mou (the finger of Mourinho), which was caught on television.

After almost two months of deliberations, the RFEF handed Mourinho a two-match ban to be served only in the event of the Portuguese appearing in another Super Cup, the annual meeting between the league winners and the King's Cup holders. 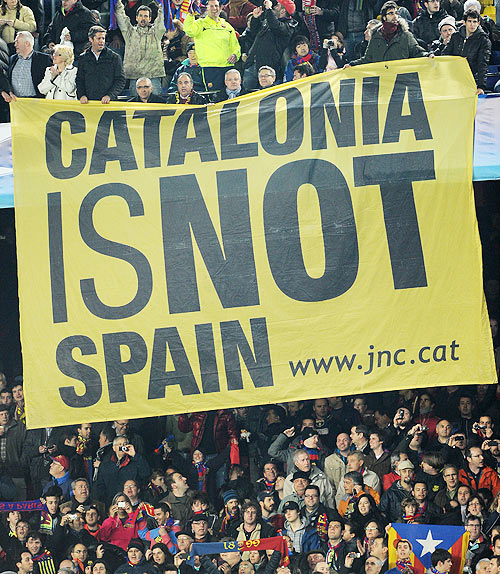 Barcelona's slogan 'more than a club' helps explain why the El Clasico is more than just a football match.

Barca is seen as a symbol of Catalan nationalism and of the region's struggle for recognition against the perceived centralising force of the Spanish government in Madrid, embodied in Real.

Barca fans wave the yellow and red-striped Catalan flags and hold up banners at the Nou Camp proclaiming in English that 'Catalonia is not Spain'.

Many whistled through the national anthem at the Mestalla before last year's King's Cup final.