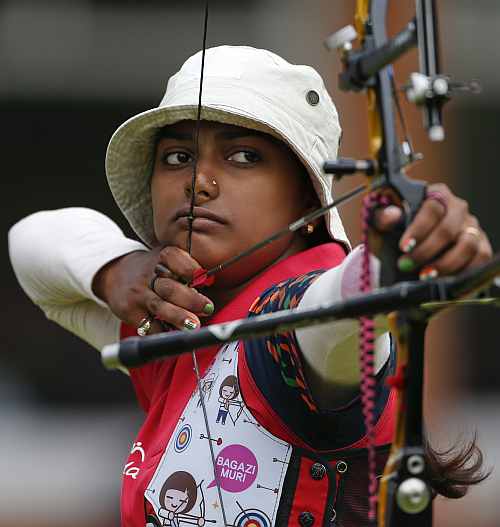 India's golden girl Deepika Kumari led the women contingent to a new height stunning world champions Korea in the World Cup, while the relatively new compound archers too emulated their recurve teammates in what turned out to be a good year for Indian archery.

The biggest headline-grabbing moment of Indian archery came in August when the women's trio stunned reigning Olympic champion Korean team by a four-point margin in the World Cup Stage 4 final in Wroclaw, Poland in a historic feat.

It was the Indian women team's second World Cup gold medal this year after a similar achievement at Stage 3 in Medellin, Colombia where they had beaten China in the gold medal clash.

It was an out and out women's show as the recurve team of Deepika, Laishram Bombayla Devi and Rimil Buriuly clinched two World Cup golds, while the men's team struggled to get their combination right and continued to tumble without a single medal at the highest level.

Compound archers too got inspired by the feat as the team of Abhishek Verma, Ratan Singh Khuraijam and Sandeep Kumar grabbed the headlines in October by upsetting the world champions Koreans to claim the team gold at the Asian Archery Championships in Taipei.

"This year is entirely dedicated to compound archers in view of their brilliant performance in all international competitions attended during 2013 which is a good sign for the preparation of ensuing 2014 Asian Games, Incheon where Compound event has been included for the first time," President of Archery Association of India (AAI) Vijay Kumar Malhotra said.

This was for the second time that India team had won the Asian Champions title in compound men category.

But a gold medal in the prestigious World Cup Final eluded Deepika Kumari for a fourth successive time as she settled for her third silver on the trot after being pipped by Korean Olympic champion Ok-Hee Yun, at the concluding World Cup meet held in Paris.

It was Deepika's fourth successive World Cup Final appearance. After ranking fifth in 2010, Deepika clinched silver medals in both 2011 and 2012. 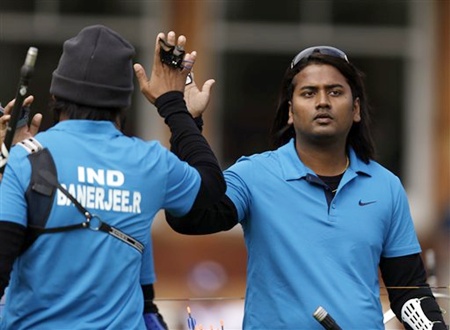 Compound men and women teams had won gold and silver medals respectively and I R Sanam had occupied the top slot on the podium in the 16th Asian Championship, Bali in 2009 which was the best ever results achieved by compound archers.

Deepika ended the year with a rich haul of seven medals at the International level (three gold, three silver and one bronze) beginning with a two-silver effort at the World Cup Stage 1 in Shanghai.

One of her medals in Shanghai was shared with Jayanta Talukdar, India's top-ranked male recurve archer who had a forgettable injury-ridden 2013 with two medals to his kitty.

Talukdar's second medal, a gold, also came with Deepika in the mixed section at the 18th Asian Archery Championship in Chinese Taipei.

But it was a year of the compound event archery as India made rapid progress in the section which has been included in the Asian Games for the first time.

The biggest feat in the compound section came in the World Cup Stage 2 in Antalya, Turkey where the mixed team of Rajat Chauhan and Majudha Soy won a silver after going down to Italy by a point.

In a fairy tale run, the duo after qualifying third behind Korea, defeated Great Britain, Russia and Canada en route to their first-ever final.

In fact, the compound archers performance was the saving grace for India at the World Cup Stage 2 where all the fancied recurve archers had returned empty handed to end their campaign with a solitary silver.

In the Stage 3, the compound men's team won a bronze in Medellin, Colombia.

The compound archers capped a fruitful year in a glorious fashion by bagging two gold, one silver and one bronze medal to swell India's tally to six medals (3-1-2) to finish second at the 18th Asian Archery Championships and Youth Olympic Games qualifiers in Chinese Taipei.

The mixed compound team of Abhishek Verma and Lily Chanu beat the Iranian team by one point to emerge victorious in the championship match and add a second gold.

"Things are really looking bright after compound event has been included in the Asian Games. We would look to garner more medals in the next year's event," secretary general of the Archery Association of India Anil Kamineni said. 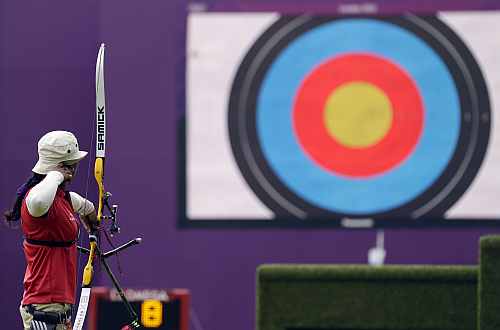 Indian archers booked two berths, one each in the men's and women's categories, for the Nanjing 2014 Youth Olympic Games based on their performances in the qualification tournament in the Youth World Championship at Wuxi (China).

India were among eight countries to have earned full quota places for the Youth Olympic Games besides hosts China, as 17 berths in men's and women's categories were up for grabs in the Wuxi meet in October.

There was also good news off the range as government of India recognised the archers performance.

India women's team coach Purnima Mahato, who was instrumental in the rise of Deepika, became the second in archery after Sanjeev Singh -- both from the TataArcheryAcademy -- to win the Dronacharya Award given by the President of India for excellence in sports coaching.

Mahato was joined by Olympian Chekrovolu Swuro who won the Arjuna Award in another achievement in archery.

The game had its share of low points as well when the national camp at the Army Sports Institute in Pune turned out to be jinxed and was shifted to the current venue -- SAI, Aurangabad following two incidents.

Assam archer Pratima Boro was found hanging from the ceiling fan in her hostel room in an incident that first rocked the ASI, Pune on May 3 and then in a month's time, the Pune camp was in the news again when two young recurve archers were suspended after being caught in a compromising position.

The archery season will conclude with the Senior Nationals to be held in Jamshedpur from December 22.