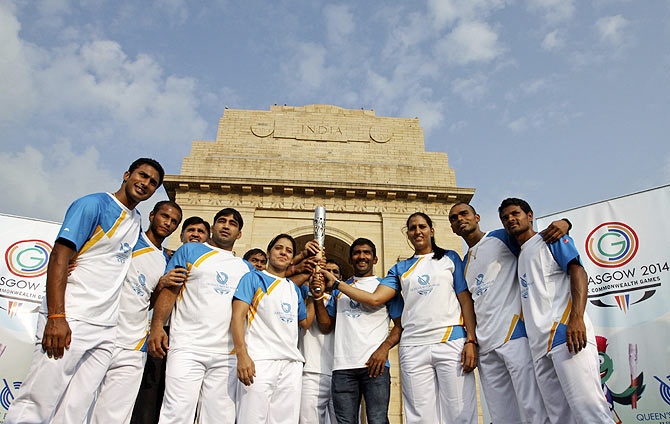 Image: Indian athletes pose as they hold the Commonwealth Games Baton in front of the India Gate in New Delhi
Photographs: Reuters

It will be a tough ask for Indian athletes to replicate their performance of the 2010 Delhi Commonwealth Games at this year’s event in Glasgow.

However, hopes of India finishing in the top-five medals tally are not far-fetched.

After getting back in the Olympic fold, a 215-strong Indian contingent will look at a strong performance at the 20th Commonwealth Games which begins in Glasgow on Wednesday.

India finished second behind Australia with a record 101 medal haul in New Delhi in a Games marred by corruption scandals and construction delays but the Delhi Games triggered an ascent in sports achievements with another record-breaking show in the 2010 Asian Games in Guangzhou where India won 65 medals.

Two years later, the country won six medals in London, almost half of the individual medals won in the entire Olympic history.

But in Glasgow, the most realistic target for India would be a third-place finish with the top spot expected to go either to Australia or England.

The 20th edition of the Games will officially be opened by Queen Elizabeth II on Wednesday with a ceremony at the iconic Celtic Park, the home Scotland's famous football club Glasgow Celtic.

The Opening Ceremony, to be produced by an international events company Jack Morton Worldwide involved in the Ceremonies for Manchester 2002, Melbourne 2006 as well as the Athens Olympics and the 2010 World Cup, is expected to attract a global audience of more than one billion and is set to feature more than 2,000 volunteers taking part in the event.

The Ceremony will also feature a near 100m wide and 11m high LED screen erected in front of the South Stand at Celtic Park to broadcast images on the night. 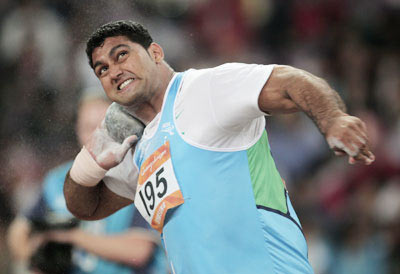 The Games will see 4,500 athletes from 71 nations of the erstwhile British empire compete for the top honours with superstar sprinter Usain Bolt of Jamaica and middle and long distance king Mo Farah of England expected to set the Hampden Park Stadium ablaze.

A total of 261 medal events across 18 sports will be contested across 11 days in the third-biggest multi-sporting event after Olympics and Asian Games. The Games will also include the highest ever number of para-sport events with 22 gold medals up for grabs across five sports.

India, which has sent a contingent of 215 athletes in 14 disciplines, its largest ever after 2010 Delhi CWG, will be hit hard by the scrapping of archery and tennis from Glasgow Games and the reduction in the number of medal events in shooting and wrestling.

The country had won a combined 12 medals from archery and tennis in 2010 while bagging 14 medals from the 18 events dropped this time from shooting. Greco-Roman category in wrestling, from which India won eight medals in 2010, has also been done away with in Glasgow.

Finishing second in Glasgow ahead of England, whose athletes are competing under near home-like conditions, is unlikely for India.

The country had finished second in 2010 after winning one gold more than England which though had bagged 31 more medals.

India and Canada, which has sent a 265-strong team to Glasgow, its largest ever for a non-home Commonwealth Games, are expected to fight it out for the third place.

India shot putter Om Prakash Singh Karhana, who secured the gold at the Asian Indoor Athletics Championship in February this year is a medal contender. 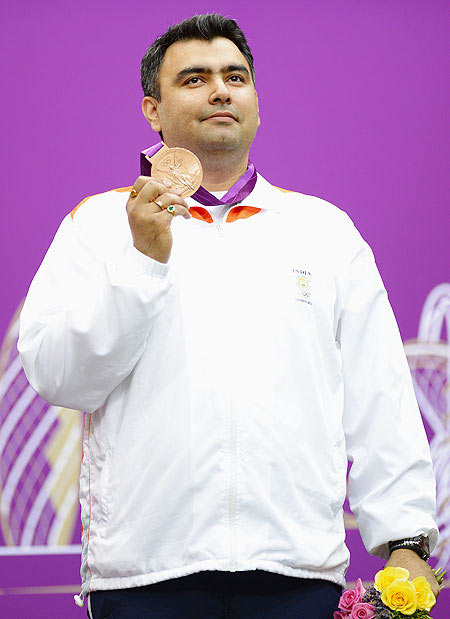 The fight for the top spot will, however, be intense with England likely to challenge Australia's reign at the top of medal table since 1990. Both Australia and England will each be represented by over 400 athletes.

India, which has more than half of the total two billion population of the Commonwealth countries, has returned with nearly 30 medal winners of the last Games with the likes of Abhinav Bindra, Gagan Narang, Vijender Singh, Sushil Kumar, Yogeshwar Dutt, Krishna Poonia, Ashish Kumar, Achanta Sharath Kamal set to prove their mettle once again.

As usual, shooting is still expected to contribute a major chunk of medals for India despite 18 events being dropped in Glasgow since the last edition.

In Delhi, shooting had given 30 out of 101 medals India won and this time also, the country would look up to the likes of star marksman Abhinav Bindra, Gagan Narang, Vijay Kumar, Heena Sidhu to deliver once again.

India will also find its medal count getting reduced due to scrapping of Greco-Roman wrestling (seven events) from which the country had won four gold, a silver and two bronze. But, India still is expected to win at least 10 medals from wrestling. 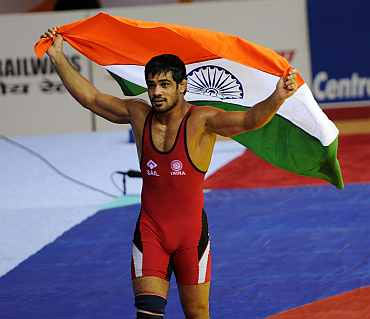 Olympic medallists Sushil Kumar and Yogeshwar Dutt will lead the campaign and both, though fighting in new weight classes due to tweaking of categories by world governing body FILA, would be looking for gold in 74kg and 65kg freestyle respectively.

In hockey, the Olympic sport which is most sentimentally attached to the people, India is expected to win at least a medal either from men or women.

Indian men won a silver in 2010 CWG after a humiliating loss to Australia in the final and this time they will have to beat either New Zealand or England in the semi-finals, if they reach that stage, to make it to the title round.

In women's hockey, India will first hope to finish in the top two in their group with higher-ranked New Zealand and South Africa in the fray.

India are also set to lose out medals in athletics, which yielded 12 medals, including two gold, last time. With lack of preparation ahead of the Games and most of the track and field athletes struggling for form, the country may not even reach the half-way mark in the blue-riband sport of the multi-sporting event. Women's 4x400m relay quartet has an outside chance while the women's discus may give another medal with Seema Punia having a chance in a field which has very few world-class competitors.

In badminton, despite the absence of star shuttler Saina Nehwal, India are expected to do well and almost certain to win a medal in men's and women's singles. Rising star P V Sindhu is the highest-ranked shuttler in women's singles and she can win a gold this time.

In men's singles, with the pulling out of world number one Lee Chong Wei of Malaysia, P Kashyap should win at least a medal if not gold. Another Malaysian Wei Feng Chong is now the highest ranked player left in fray at 19th while Kashyap, bronze winner in 2010 Delhi CWG, is ranked two rungs below.

England's Rajiv Ouseph, who won a silver in 2010 Delhi CWG, is third highest ranker at 27th but he has struggled with his form this season and India's K Srikkanth or R M V Gurusaidutt has the capability to bag a medal.

Defending women's doubles champions Jwala Gutta and Ashwini Ponappa may also get a medal though it will be tough for the Indian pair. 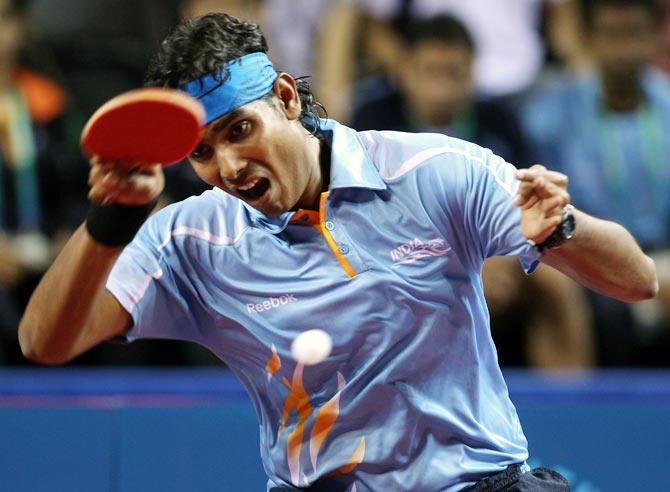 The loss in athletics may be compensated by weightlifting which could turn out to be the surprise discipline for India as the medal tally of eight in 2010 may be surpassed this time. The country's lifters had done exceedingly well in the Commonwealth Championships in November last year.

With weightlifting heavyweight Nigeria coming in Glasgow without much preparation and in the absence of a couple of Malaysian gold winners of last Games, India may get more medals than the eight they won in Delhi though it is difficult to predict the colour of the medals.

Indian boxers may be able to win the same number of seven medals which they bagged in 2010 but unlikely to bag three gold though defending light welterweight (upto 64kg) champion Manoj Kumar (64kg) and 2008 Beijing Olympics bronze medalist Vijender Singh (75kg) are taking part in Glasgow.

For the first time, women's boxing will be introduced in the Commonwealth Games in three weight categories -- 51kg, 60kg and 75kg -- and the Indians, including former Asian champion L Sarita Devi (60kg) will be in the reckoning for a medal each.

India should also win at least two medals in table tennis. The Indian paddlers had won five medals, including a gold in men's doubles, in 2010. Veteran Achanta Sharath Kamal, who was part of gold-winning pair in 2010, is again leading the Indian campaign

Gymnast Ashish Kumar won a silver and a bronze in men's vault and floor exercise in the last Games in Delhi but it will have to be seen whether he can repeat that performance in Glasgow while the judokas are also hoping to get at least a medal in their sport which returned to the CWG fold after 2002.

Para athlete Prasanta Karmarkar won a bronze in men's 50m freestyle S9 swimming in 2010 and he is also in the fray again.