Sign in  |  Create a Rediffmail account
Rediff.com  » Sports » 10 years on... Ace marksman Rathore on Olympics glory and life after 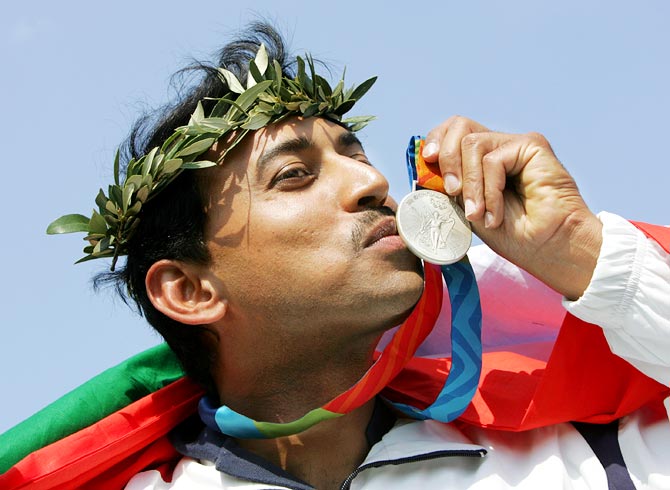 'At a certain point in life your individual success doesn't give you the required satisfaction. It does not motivate you to wake up in the morning and push you to give your best.'

'When I work for a larger number of people now, it is like playing for them.'

Rajyavardhan Singh Rathore looks back on his silver medal win at the Athens Olympics 10 years ago, and tells Harish Kotian why he decided to foray into politics.

It is one moment India's shooting fraternity will never ever forget.

Exactly 10 years ago, on August 17, 2004, Rajyavardhan Singh Rathore won the silver medal in the men’s double trap at the 2004 Olympic Games in Athens. That success proved to be a watershed moment for the sport in the country.

Rathore was one of the world's leading marksmen in the last decade, having won around 25 medals in double trap at various international events. However, even as Indian shooting grew from strength to strength, he drifted away from the sport.

He continued to serve in the Indian army with distinction for 23 years before quitting to join politics with the now-in-power Bharatiya Janata Party.

In his new role too he tasted instant success, winning the Lok Sabha election on debut earlier this year and being elected Member of Parliament from Jaipur Rural.

In a freewheeling interview with Rediff.com’s Harish Kotian, Rathore reflects on his silver medal win at Athens, and reveals why he decided to foray into politics after a long and successful career in sports and the Indian Army.

It's been exactly 10 years since you won the silver medal at the Athens Olympics. How proudly do you look back at the achievement?

The 2004 Olympics silver medal will always be a great moment for all of us, especially because we as a nation, at least in our self-belief, broke out of our thought process which was restricting us to mediocre performances.

Personally, of course, it was a great blessing that I was part of it. It involved plenty of hard work and determination. The end result was very sweet and it left behind great memories with me. With that foundation I moved ahead and got involved with things through which I can add value to more people in a variety of ways. 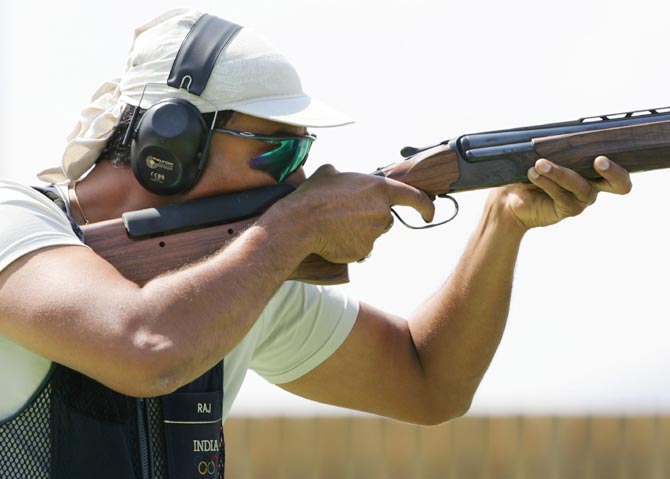 Would you rank the Olympics silver medal the biggest achievement of your life?

I don’t think so. In a different and challenging environment, when you are projected and when you come out of it victorious, is always a memorable moment even though it may not have the same magnitude like the silver medal always.

Which victory was sweeter? Winning a medal on your Olympics debut or winning the elections on debut?

I think they both are important. These two are events which happened in the public domain and in the public view. However, there are events that happen in your life on smaller magnitude but of equal importance. So anytime one achieves or one performs well or overcomes a hurdle or a limitation, it is an achievement which is cherished in one’s life.

Smaller things, like the every single medal that I worked hard for, is also an achievement. My stint in Kashmir, doing anti-terrorist operations, and very active and lethal battles, and standing by and bringing my men alive from very deadly situations, inflicting injury on the enemy, is again a great achievement and sweet memory.

The creation of the World record at a time when most had written me off... I had shot 148 out of 150 in Kuala Lumpur in 2011. That memory is also very sweet. So they may not have the same magnitude, but each memory has its own importance.

'We have to move towards efficient administration' 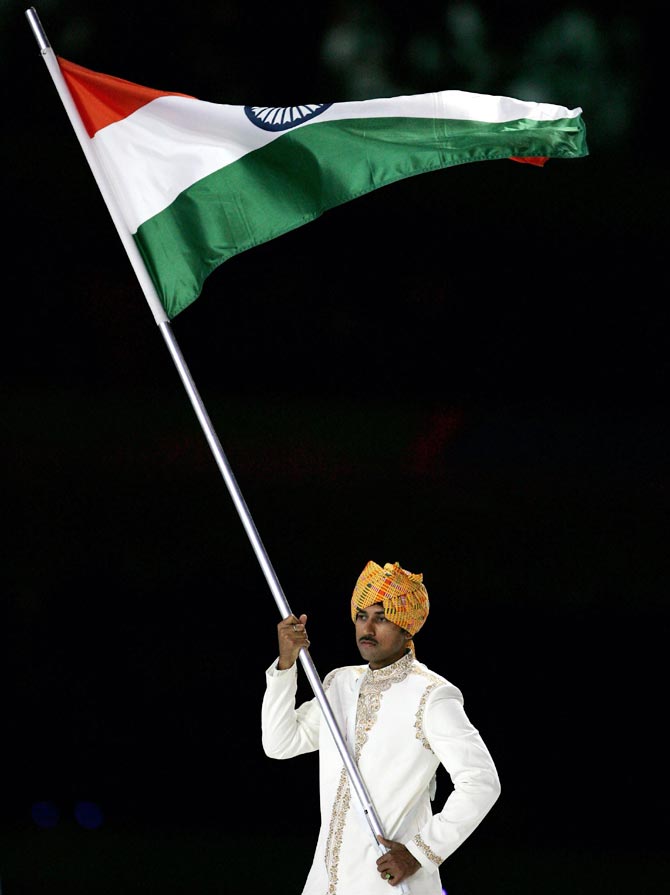 Your silver medal at the 2004 Olympics proved to be a watershed moment for Indian shooting. Looking back, how proud do you feel to have sparked off a revolution that has made India one of the top countries in the sport?

As a pioneer in any field, one goes through difficult times. Now, when one looks back and sees the number of medals and victories being lapped up by Indians, one feels proud of having walked that path earlier.

In fact, Abhinav Bindra had said in an interview after winning his Olympic gold medal: 'For years and years we as a country chased the gold medal but couldn’t achieve it. We always had a psychological barrier. There were always question marks over whether we were capable enough of doing it. But now that it’s been done, starting with the silver medal in Athens which was won by Colonel [Rajyavardhan Singh] Rathore of India, I think a lot of the young athletes have more belief. When he won silver in Athens, I told myself he’s from my own country; if he can do it, surely I can.'

How proud do you feel to have inspired a champion like Bindra?

I would say this is a chain which must continue in the country. I think the trend has already started in the sport of shooting, wrestling, boxing. I hope that it starts in other sports as well. More importantly, we have to move towards efficient administration.

Shooting is a rare sport which has no age limit. We have seen champions like Warren Potent, who won a gold medal at the age of 52 at the Glasgow Commonwealth Games. Is there any chance of you making a comeback to shooting at some point in future?

My son (Manav) is into the sport, so I am connected with the sport more directly than my present occupation would permit. As part of my passion I will perhaps always stay connected not just with shooting but with all sports.

'When I work for a larger number of people now, it is like playing for them' 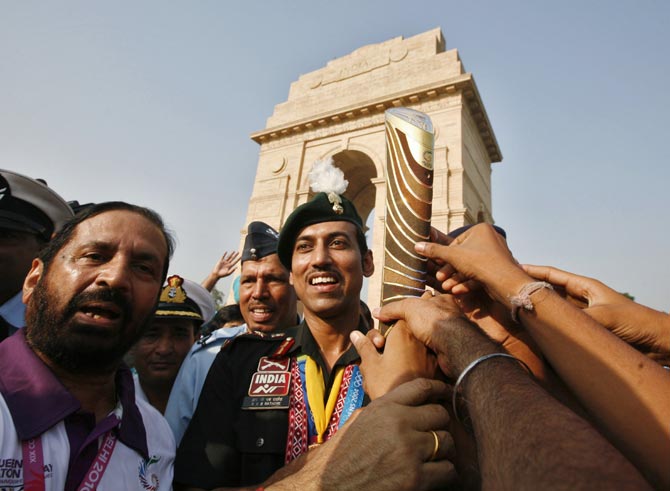 How difficult a decision was it to give up shooting? Were you affected when you were left out of the Indian squad for the London Olympics?

What happens is that sometimes we need to move ahead from personal success and glory for the larger good. That gives us a great sense of satisfaction. We are constantly being affected by our circumstances. Sometimes these circumstances affect us in a negative manner, sometimes it propels us to positive things. It may ask of us greater effort, but that is what challenges are meant to be and you have to overcome them.

You also quit the Indian army to join the BJP? What made you enter politics?

Like I said, at a certain point in life your individual success doesn't give you the required satisfaction. It does not motivate you to wake up in the morning and push you to give your best. These are the times for certain people; for me, at least! When I work for a larger number of people now, it is like playing for them. I played for the country before; now when I play for the country my effort directly adds value to their lives. Now when I wake up in the morning, this inspiration, this motivation, pushes me to give my best.

Politics seems to keep you very busy; now you are always amongst the people. What are the challenges you face? Your experience in politics so far...

It is too early to summarise the things that I have learnt. But let me tell you that politics is such a wide field that there can be multi-specialties within them; you have to be the master of all. So there is a very large amount of knowledge that you need to acquire. You are continuously being pushed into uncomfortable zones, which you need to embrace as your own.

'The shooting community in India is setting high benchmarks' Looking at how Indian sport has grown in the last few years, do you think we can win more medals at the Rio Olympics in 2016 than we won at the last Games in London?

I am not in a position to predict and deliver because in no way I can control Indian sport. But I can say that the shooting community in India is setting high benchmarks and, therefore, when people have the will to be a part of the sport in the country they have to aspire to win Olympic medals because the standard has already been achieved.

Talking about your son, how is he doing in the junior category? He has already won a few medals at the international level, including a bronze in the Asian Shotgun Championships last year.

My son is doing alright. He is No. 1 in India at the age of 15, in the Under-21 category, which shows potential. However, he has lots of time ahead and lots of hard work to put in.