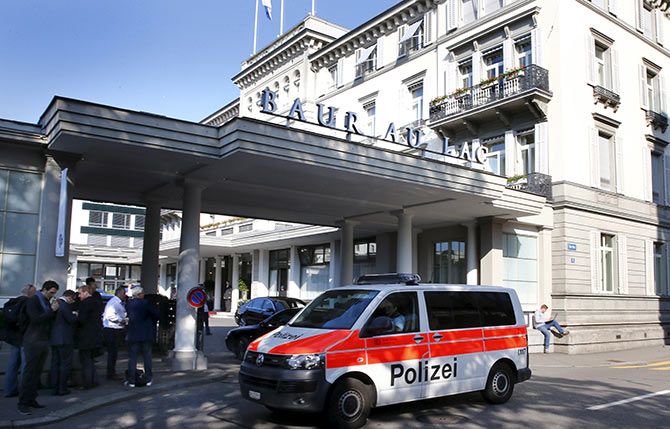 A police van drives past the Baur au Lac hotel in Zurich. Six soccer officials were arrested and detained pending extradition to the United States over suspected corruption at FIFA, the Swiss Federal Office of Justice said in a statement. Photograph: Arnd Wiegmann/Reuters

Six soccer officials were arrested in Zurich on Wednesday and detained pending extradition to the United States over suspected corruption at soccer's governing body FIFA, the Swiss Federal Office of Justice (FCOJ) said in a statement.

The New York Times said they were high-ranking FIFA officials and were in Switzerland for the FIFA Congress where incumbent Sepp Blatter faces a challenge from Jordan's Prince Ali Bin Al Hussein in a presidential election on Friday.

"The US authorities suspect them of having received bribes totalling in the USD millions," said the statement.

"The arrest warrants were issued further to a request by the US authorities. The US Attorney’s Office for the Eastern District of New York is investigating these individuals on suspicion of the acceptance of bribes and kick-backs between the early 1990s and the present day.

"The bribery suspects -- representatives of sports media and sports promotion firms -- are alleged to have been involved in schemes to make payments to the soccer officials -- delegates of FIFA and other functionaries of FIFA sub-organizations -- totaling more than $100 million. In return, it is believed that they received media, marketing, and sponsorship rights in connection with soccer tournaments in Latin America.

"According to the US request, these crimes were agreed and prepared in the US, and payments were carried out via US banks.

The statement said the detainees would be questioned by Zurich police regarded the U.S. request.

"A simplified procedure will apply for wanted persons who agree to their immediate extradition. The Federal Office of Justice (FOJ) can immediately approve their extradition to the US and order its execution.

"However, if a wanted person opposes their extradition, the FOJ will invite the US to submit a formal extradition request within the deadline of 40 days specified in the bilateral extradition treaty."