The 17-year-old Indian, who stunned the world by beating London Olympics gold medallist Li Xuerui in the quarter-finals of at China, surged four places to No 20 in the BWF rankings, announced on Thursday.

London Olympics bronze medallist and India's top shuttler Saina Nehwal retained fourth place in the rankings list. The 22-year-old from Hyderabad is currently resting and did not play in the China Masters and Japan Open.

In the men's singles, Olympics quarter-finalist Parupalli Kashyap slipped a rung down to 20th, while Ajay Jayaram jumped six places to 23rd place, following a semi-final finish at the China Masters.

In women's doubles, Ashwini Ponnappa and Jwala Gutta, who has decided to take a six-month sabbatical from badminton, remained steady at No 22, while Jwala and V Diju, who tied the knot with Dr Soumya on September 17, dropped two places to 14 in mixed doubles.

Ashwini, who is now concentrating on her mixed doubles career, moved to No 56 along with partner Tarun Kona, jumping 22 places. 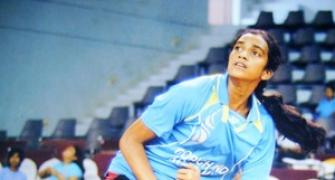