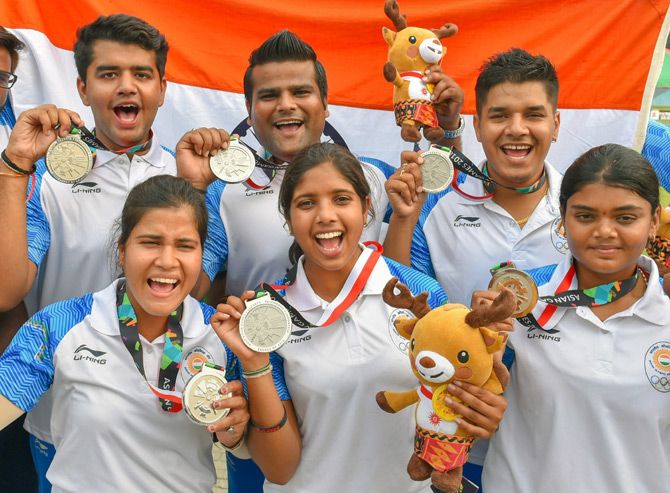 IMAGE: The Indian men's and women's team pose with their silver medals in the archery compound team event at the Asian Games. Photograph: PTI

India suffered two heart-breaking losses to South Korea in the the men's and women's compound archery finals to settle for a silver each at the Asian Games in Jakarta on Tuesday.

Both the finals were fiercely contested. While the women faltered in the final set, the men could easily blame their luck after the final went into a shoot-off with scores in the fourth set tied at 229-229.

Defending champions India and Korea shot 29 each in the shoot-off but the latter scraped via a measured win, which implies shots closest to the bull's eye (inner 10).

Two archery medals were still more than welcome for India after the disappointment in recurve category.

It was a perfect start to the men's final from India as the team of Abhishek Verma, Rajat Chauhan and Aman Saini shot a maximum 60 to Korea's 56 in the opening set.

The shooting standards dropped in second set with India scoring 54, including an 8, to the opponents' 58, levelling the final at 114-114.

The third set went in India's favour 58-56, giving them a much need two point advantage going into the final set. There was a gold at stake and senior archer Verma constantly fired up his teammates.

Verma delivered when it mattered most, shooting couple of 10 pointers in the final set. But when the judges ruled two 9s to 10s, it was 229-229, pushing the final into a dramatic shoot-off.

"You can't say much about finals like these. The wind direction also played a role. It is just bad luck for us today," said a dejected Verma. 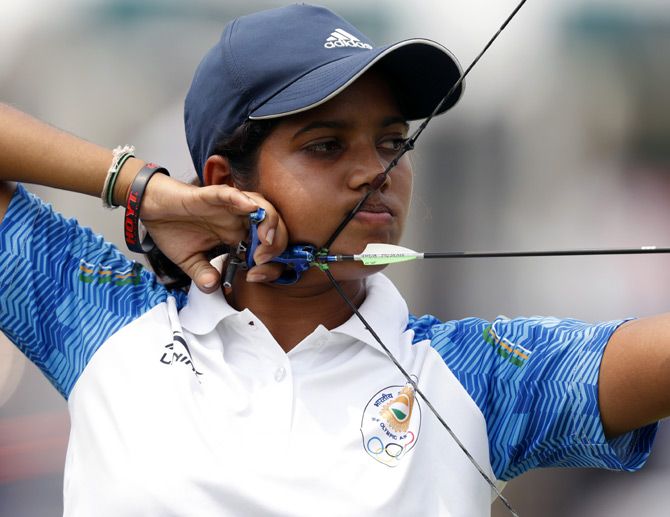 The trio of Muskar Kirar, Madhumita Kumari and Surekha Vennam matched the mighty South Koreans quite literally until the fourth final set in which the only 8 pointer of the match, shot by Madhumita  proved costly. The  Koreans won the final set 58-55 and final 231-228.

The gold medal match was neck and neck till the third set with both teams tied at 173-173.

The Koreans were taking the aim first, putting the Indians under constant pressure. The pressure got to the Indians in the end.

India had beaten Chinese Taipei in the semifinals and Indonesia in the last eight stage. India had won a bronze in the same event at Incheon four years ago.

"We have improved on our last time's performance so that is a big positive. The wind conditions were tricky but we were pretty consistent until the final set. We are really happy with our performance.The support from the central government has been great," 22-year-old Surekha, who was part of the bronze-winning team in the previous edition, told PTI.

Asked if the pressure of shooting second got to the team, she said: "We don't think like that."