Indian mixed doubles pair of Sikki Reddy and Pranaav Jerry Chopra clinched their maiden Grand Prix title, bagging the Brazil Open with a straight games victory over Canadian combo of Toby Ng and Rachel Honderich at  Foz do Iguacu in Brazil, on Sunday. 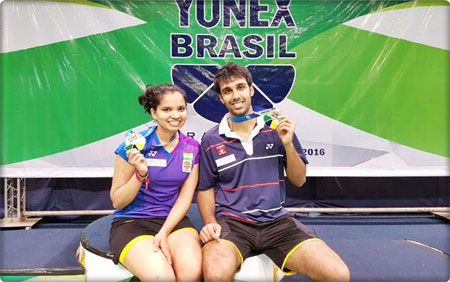 "Mine and Pranaav Jerry Chopra first Grand Prix title, m so so so sooooooooooo happy," wrote Sikki on her Facebook page after the win late Sunday night.

"I would like to thank my family Neelakurthi Madhavi Prajjun Reddy and dad who believed in me and sent me to this trip at their expense.

"Last but not the least Tan Kim Her, Pullela Gopichand Arun Vishnu, Sumeeth Reddy. You all made me stronger with each passing day, I may be the one who does all the hard work, but you are the one who motivates me to do it. You all are my ultimate source of inspiration," she wrote.

Sikki, who was part of the bronze medal-winning Indian team at the 2014 and 2016 Uber Cup, has so far played with six mixed doubles partners, including V Diju, Alwin Francis, Tarun Kona, Manu Attri and K Nandagopal.

Pranaav and his men's doubles pair of Akshay Dewalkar had created a flutter at the Syed Modi Grand Prix Gold this year when they reached the finals after defeating Korean combo of Kim Gi Jung and Kim Sa Rang in a gruelling semi-finals.

The 23-year-old Ludhiana lad was part of the Indian team that stunned mighty China 3-2 to win a bronze in the Asia Badminton Team Championships.

A national champion in the mixed doubles in 2010, Pranaav had started in Sutlej club in Ludhiana before moving to Mumbai where for two years he trained under Uday Pawar.

In 2008, he joined Gopichand Badminton Academy and started competing on the international circuit.

Image: Sikki Reddy and Pranaav Chopra celebrate after their title win on Sunday