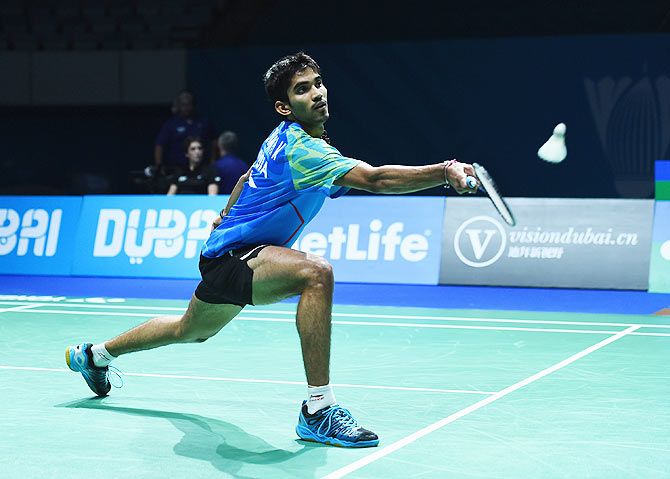 Open men's singles trophy with a straight-game victory over Japanese qualifier Kazumasa Sakai in the final in Jakarta on Sunday.

"He was playing well, especially in the second game and I think for me coming back from 6-11 down and make it 13-13 was the turning point," said Srikanth, who had clinched the 2014

"My coach will have a special place in my heart as after he came, I reached the finals at Singapore and to win this tournament, which is considered the biggest tournament. I want to thank all the fans who have been rooting for me all this week," he added.

Srikanth played a patient game and didn't allow his opponent to engage in any fast-paced rally. He dictated the pace with his precise angled returns and unleashed his smashes at perfect intervals to down his rival.

Playing in tricky windy conditions, Srikanth took time to gauge the conditions as his initial returns went wide and out.

But his rival also suffered because of similar unforced errors and the Indian led 6-4 early on. He consolidated his lead to reach 11-8 at the break.

After the interval, Srikanth continued to dominate the proceedings. His net dribbles were better than Sakai and with Sakai struggling with precision, the Indian zoomed to a 19-11 lead and sealed it with two lucky net chord points.

After the change of sides, Sakai was more aggressive in his approach and produced an improved net game to dominate the rallies.

Soon, the Japanese was leading 7-3 as he entered the break with an 11-6 lead with the help of a backhand return near the net.

After the interval, Srikanth's aggressive game gave him the desired results. He turned the tables and caught up with the Japanese at 13-13 with an on-rushing smash at the net.

The duo moved neck and neck after that till 19-19 before Srikanth produced two fantastic smashes to seal the issue and punched the air in celebration.