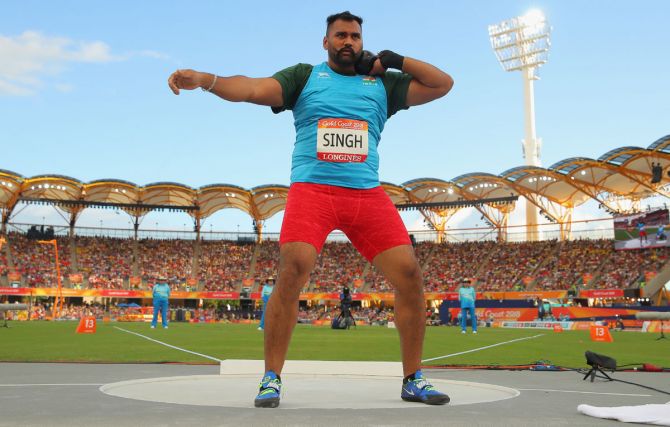 Shot-putter Tajinder Pal Singh Toor on Monday qualified for the Tokyo Olympics with an Asian and national record throw at the Indian Grand Prix 4 in Patiala on a day when the national women's 4x100m relay team and sprinter Dutee Chand also breached the previous best marks in the country.

The 26-year-old Toor, a 2018 Asian Games gold winner, crossed the Olympic qualification mark of 21.10m with a throw of 21.49m, which was his first attempt, and broke his own national record.

He also came up with big throws of 21.28m, 21.12m, 21.13m in his third, fourth and fifth efforts, all of them crossing the Olympic qualification mark.

The athlete from Punjab also shattered the 12-year-old Asian record of 21.13m which was in the name of Sultan Abdulm Al Hebshi of Saudi Arabia since 2009.

"I am very happy to qualify for my first Olympics. Moreover, it was Asian as well as national record," Toor said.

"I was confident of crossing the qualification mark because I was doing 21.20 to 21.40m. So, it was not a surprise for me. I am looking forward to doing well in Tokyo.

"It was a bit hot today but the conditions were all right otherwise."

Toor said the qualification has come as welcome return of good fortune for him.

"I had several injuries last year and by the time I was fit, the COVID-19 restrictions came into place. This tournament is a big relief for me. I am now aiming to cross 22m," he said.

His record-breaking performance is subject to clearing a dope test. It is learnt that dope control officers from the National Anti-Doping Agency were in attendance for the one-day meet at the NIS-Patiala.

Toor's performance on Monday will put him at the 15th spot in the Road to Tokyo list.

The women's relay team, however, failed to place itself inside the Olympic qualifying bracket despite a record effort of its own.

The quartet of Hima Das, Dutee Chand, S Dhanalakshmi and Archana Suseendran clocked 43.37 seconds to win the race ahead of India 'B' team (48.02 seconds) and Maldives (50.74) in the three team race.

The Indian team bettered the previous record of 43.42 seconds set in 2016 in Almaty by the quartet of Merlin K Joseph, H M Jyothi, Srabani Nanda and Dutee.

But the quartet failed to clock below 43.05 seconds needed to be among the top 16 teams in the Road to Tokyo list. Sixteen team will run in the women's 4x100m relay race in Tokyo Games.

India was placed 22nd before Monday's race on the basis of its 43.81 seconds performance during the 2019 Asian Championships. Monday's 43.37 seconds will take India to the 20th spot.

Olympic-bound Kamalpreet Kaur bettered her earlier national record mark in women's discus throw by hurling the iron disc to a distance of 66.59m.

But her performance will not be counted as the new national record as she was the lone competitor in the event.

"As per rules, for national record purposes, the number of competitors should at least be three. So, her performance will not be counted as national record. But it will be considered for other purposes like ranking," AFI Secretary Ravinder Chaudhry said.

Kaur had become the country's first woman discus thrower to breach the 65m mark with a national record mark of 65.06m during the Federation Cup here in March, which also booked her a spot in the Tokyo Olympics.

Her performance on Monday will place her 8th in the Road to Tokyo list, and could put her in the medal contention bracket.

She completed the race in 11.17 seconds, agonisingly close to the Olympic qualification time 11.15s.

The previous record was 11.22 seconds, also in the name of Dutee.

Despite failing to cross the Olympic qualification mark, Dutee is expected to make the Tokyo Games on the basis of world rankings as she is sitting pretty at 42nd spot out of 56 athletes to run in the Olympics 100m race.

Star sprinter Hima Das clinched the 200m top honours with a personal best time of 22.88 seconds. Her timing was not far behind the automatic qualification mark of 22.80 seconds.

In the men's long jump, Olympic-bound M Sreeshankar won the event with a best effort of 7.74m.

The performance still put India in the 16th spot in the Road to Tokyo list. Sixteen team will take part in the Tokyo Olympics men's 4x400m relay race.

National record holder javelin thrower Annu Rani won her event with a modest performance of 60.58m, which is far below Olympic qualification mark of 64m. She is, however, expected to qualify for the Olympics on the basis of world rankings. Her personal best is 62.43m.

The athletes will have a last shot at Olympics qualification during the National Inter-State Championships at the same venue from June 25 to 29.