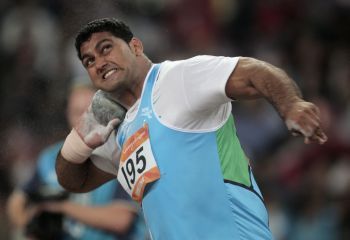 Shot putter Om Prakash Singh Karhana gave the lone gold to India in the 6th Asian Indoor Athletics Championships as he won the gold medal on the second and final day of the event at Hangzhou, China.

Om Prakash threw the iron ball to a distance of 19.07m to clinch the gold and save India from ending the championships without a medal.

For Om Prakash, who is holding the outdoor national record at 20.69m, it was the second ever medal at these championships. Earlier, he had won a silver medal in the India-dominated 2008 edition at Doha, Qatar.

Another Indian athlete, Nellickal Varkey Sheena ended at seventh place in women's triple jump with an effort of 12.48m.

On Saturday, Anilda Thomas missed the podium when she finished fourth in women's 400m in a time of 56.08 secs. Hurdler Arumugam Suresh, running his first-ever indoor race, improved the Indian best in 60m hurdles clocking 8.08 secs to win the 'B' race, meant for those not able to make it to the finals.

India had won just a bronze in the last edition of the championships at the same venue two years ago. Long jumper Kumaravel Premkumar had won the bronze.

Premkumar was selected in the team this year but could not take part due to his training stint at the United States.