Indian men hockey team's sensational run of form continued as it stunned world champions Belgium 2-1 to seal its third win on the trot in the FIH Pro League, in Bhubaneswar, on Saturday.

After defeating world number three the Netherlands in their opening two matches of the FIH Pro League, India beat world number one Belgium in a thrilling match at the Kalinga Stadium to continue their unbeaten run.

Mandeep Singh scored a field goal in the second minute of the match before Gauthier Boccard equalised for European champions Belgium in the 33rd minute with a powerful drag flick from a penalty corner.

Ramandeep Singh scored the decisive goal in the 47th minute via a penalty corner to give world number four India a victory in front of a frenzied crowd at the same venue where the home side beat the Dutch twice.

With this sensational victory, India consolidated their ranking from No. 5 to No.4 for the first time since the world ranking system was introduced in 2003.

The two sides meet again on Sunday at the same venue.

After getting off to a rollicking start in their maiden FIH Hockey Pro League with a 5-2 and 3-1 shoot-out (3-3 in regulation time) win against the Netherlands, India did well to halt Belgium's winning streak in the ongoing FIH Pro League.

Coming into this match with identical 4-2 wins against Australia and 6-2 and 3-1 triumph against New Zealand, Belgium struggled to convert their chances against India.

Despite dominating with ball possession, making as many as 38 circle entries, taking 24 shots on goal and 12 penalty corners, the Belgian unit could not muster much success inside the circle.

The Belgians were denied thanks to stand-out performance by Indian goalkeepers PR Sreejesh and Krishan Pathak who lived up to the billing hooter-to-hooter, backing India's defence by knocking off pretty much every opportunity created by the visiting team strikers.

Pathak, who was named Player of the Match, said: "We started well and worked very hard. We are very proud of our defence of our penalty corners."

"It was a tough match and playing India at home is never easy. We could not convert our chances. There have been many times when PCs have saved us but today the Indian goalkeepers were outstanding and hopefully we can seek revenge tomorrow," he said.

The Indians were quick to get off the blocks with debutant Raj Kumar Pal setting up a fantastic goal within 90 seconds of play as he passed from the left flank to Dilpreet Singh on top of the circle.

Young forward Dilpreet, making his comeback in the Indian squad after over a year, took a powerful shot on goal which found a perfect deflection from Mandeep Singh who was positioned in front of Belgian goalkeeper Vincent Vanasch.

It was Pathak who ensured Belgium did not bounce back. He was kept busy all of 15 minutes in the first quarter with Belgium creating plenty of opportunities which included as many as five penalty corners.

Belgium's wait to convert a goal ended only in the third quarter when they made a good variation of a penalty corner, opening up the angle to trick India's rushers and made enough space for Gauthier Boccard to put the ball past Pathak to level scores in the 33rd minute.

With scores reading 1-1, it was a tense final quarter but India pushed back Belgium by scoring another goal.

It was Ramandeep, who after injecting the ball during a penalty corner battery, picked up a rebound off Belgium's first rusher to score the goal.

Though Belgium created penalty corners in the dying minutes of the match, India held their nerves and experienced goalkeeper Sreejesh ensured India sealed the game to stay at second position in the points table.

Belgium are still on top with 11 points from five games. The victory was also India's 50th win against Belgium.

Ankita Raina won her third title in two weeks when she triumphed in the final of the $ 25000 ITF women's doubles event with partner Bibiane Schoofs on Saturday.

The top seeded Indo-Dutch team fought off the challenge of Miyabi Inoue and Jia-Qi Kang 6-2, 3-6, 10-7 in the summit clash.

Ankita had won both singles and doubles titles last week at the same venue.

She and Bibiane had beaten the same pair of Inoue and Kang in the opening round last week.

While the Indian stayed solid from the baseline, Bibiane complemented her with superb net play.

"Bibiane and I have played together last year as well. We made it to the finals on clay in Germany. I think it really helps when you play with someone who you have known for sometime. In pressure or crucial moments if you know well each other that it important I feel," Ankita said after the final.

"We had some good matches last week, especially the finals was very enjoyable. Both the weeks, we were top seeds and then this week since we had won the last week, we had the confidence. But every match and everyday is new and you have to start from the beginning."

Ankita said starting from zero in every new match helps them focus on the present situation.

"I enjoy playing with Bibiane because she's very cheerful on court and even when we both have the times where we feel the other one is feeling low, we carry each other well. I am very proud of our performance with these back to back wins," she said.

Sathiyan will be representing Okayama Rivets in the league, which began in 2018 and is the first ever professional league in Japan. The switch to Japan for India's top-ranked paddler comes after two fruitful seasons in Germany.

Sathiyan had won the German Cup with his club ASV Grunwettersbasch last month.

"I made the decision to move out of Germany as Japan is much better for practice and the level is higher than Europe," Sathiyan said.

He will be playing alongside and against some of the the world's leading players including world number five Harimoto Tomokazu and former world number four Jun Mizutani.

Among the foreign players taking part in the league are world number six Lin Yun-Ju of Chinese Taipei and 20th-ranked Lee Sangsu from South Korea.

Besides Okayama Rivets, TT Saitama, Kinoshita Meister Tokyo and Ryukyu Asteeda are the other teams in the competition.

Chauhan, a South Asian Games gold medallist, went down fighting against Kazakhstan's Aibek Oralbay in the final after getting a walkover in the semi-finals. Chauhan lost his bout 0-4 in a unanimous verdict.

Gulia (51kg) also settled for a silver after she lost a hard-fought final 2-3 to Russia's Soluianova Svetlana. Gulia earlier made it to final after defeating Canada's Mandy Bujold in the semi-finals with a unanimous verdict.

Sachin settled for a bronze medal in the 57kg category at the championships.

India's Koneru Humpy opened her campaign in the Cairns Cup chess tournament with a win over American teenager Carissa Yip while world champion Ju Wenjun shared honours in her first round game, in St. Louis, USA, on Saturday.

Dronavalli Harika, the other Indian in the fray, was held to a draw by Katernya Lango of Russia in 47 moves.

Humpy and Dzagnide are the early leaders after posting wins in the first round.

Humpy, the current world rapid chess champion, was in for a surprise when the young American came up with her choice of the King's Indian Defence. She, however, showed the value of experience by exploiting a positional error ruthlessly to win in 50 moves.

The day's other winner was Nana Dzagnidze, who confidently beat last year's champion Valentina Gunina after picking up a pawn on move 15.

The other two games between Mariya Muzychuk and the recently crowned world champion Ju Wenjun and Alexandra Kosteniuk and Irina Krush were draws.

Humpy faces Muzychuk in the second round with black pieces while Dzagnidze will take on Harika, also with black. 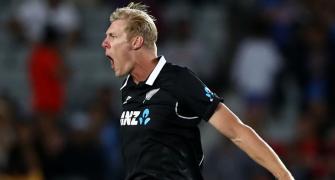 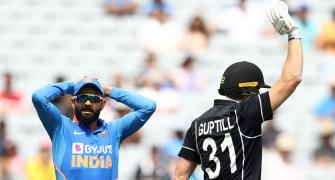 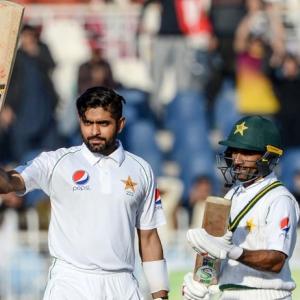