India climbed on top of the medals tally, adding four more medals to their kitty on Sunday, including two gold and a historic bronze in Women’s Skeet. They now have three medals of every colour, for a total of nine medals. 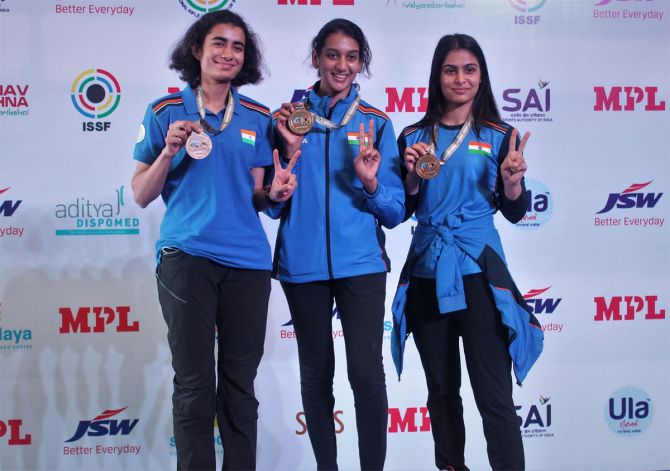 A dominant India claimed both the gold medals on offer by some distance in the men's and women's 10m air pistol team events on the third competition day of the ISSF World Cup Rifle/Pistol/Shotgun stage, in New Delhi, on Sunday.

India's terrific trio of Yashaswini Singh Deswal, Manu Bhaker and Shri Nivetha claimed the gold medal by some distance in the women's team 10m air pistol event. The Indians shot 16 in the gold medal round to finish way ahead of Poland's Julita Borek, Joanna Iwona Wawrzonowska and Agnieszka Korejwo, who managed eight at the Dr Karni Singh Shooting Range.

The home team topped the second qualification with a total score of 576 while the Polish women shot 567.

On Saturday, the 23-year-old Deswal had won the individual gold medal in the women's 10m air rifle event ahead of compatriot, Bhaker, who settled for silver. 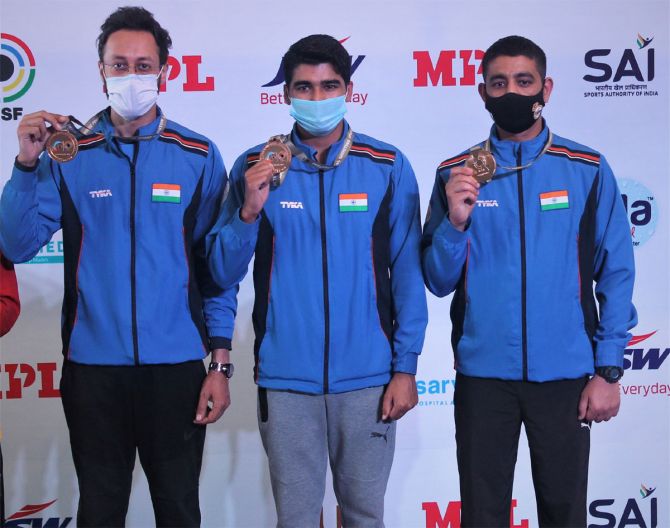 The Indian team defeated Vietnam 17-11 in the finals and as a result, the three members brought another gold medal in India's kitty in the ongoing World Cup.

Chaudhary and Co led the qualification part two with a total score of 579 while the Vietnamese managed 565.

The Indian men aggregated 1750 in the first qualification while Vietnam scored 1708. 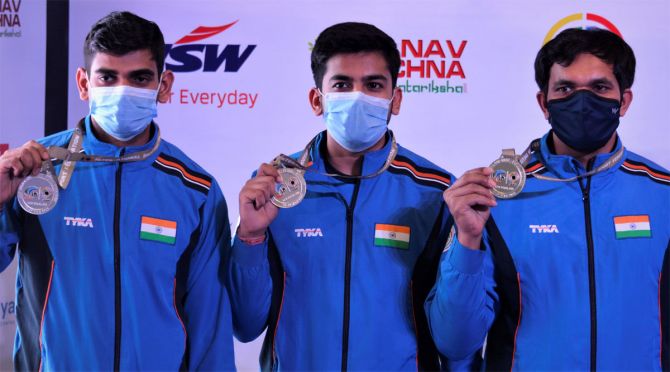 The Indian trio shot a total of 14 in the gold medal round to finish behind the winning team of Lucas Kozeniesky, William Shaner and Timothy Sherry of the United States. The US team shot 16.

In the women's air rifle event, the Indian team of Nisha Kanwar, Shriyanka Shadangi and Apurvi Chandela finished fourth with a score of 623.7 as Poland won the bronze medal with 624.1.

USA claimed gold in the women's air rifle event with a total of 627.3 and the silver went to Denmark for shooting 625.9.

The Indian men's team qualified second in the race for the gold medal round after shooting 623.4 in the second qualification series behind USA's 625.1

South Korea (621.2), represented by Taeyun Nam, Byounggil Choo and Jae Seung Chung and Iran's Pourya Norouziyan, Hossein Bagheri and Amir Mohammad Nekounam (620.1) played the bronze medal match, with the former finishing third on the podium after the Kenyans did not start. 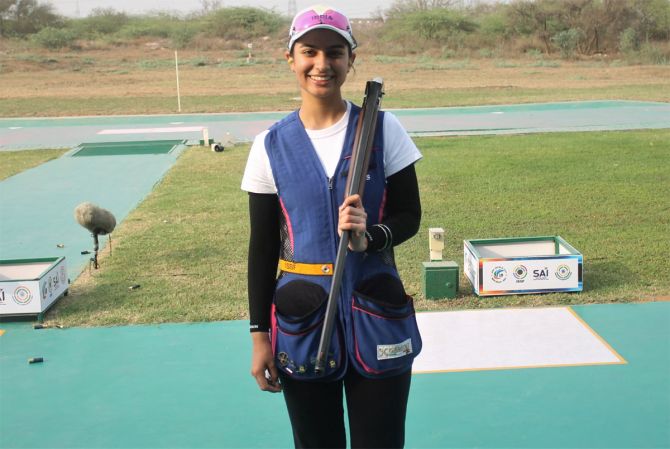 Young Indian shooter Ganemat Sekhon won the country's first-ever ISSF World Cup medal in the women's skeet event when she bagged a bronze on the third competition day of the tournament.

However, in the men's skeet final, Gurjoat Khangura finished sixth with a score of 17. Khangura also qualified in sixth place for the final.

The 20-year-old Sekhon, ranked 82 in the world, shot 40 to clinch the bronze medal at the shotgun range of the Dr Karni Singh Shooting Range.

The other Indian in the six-woman final, Karttiki Singh Shaktawat, settled for the fourth position after an impressive start, shooting 32.

Occupying the second position for a long time, Sekhon missed three birds successively to bow out of the race, leaving Great Britain's Amber Hill and Zoya Kravchenko of Kazakhstan to fight for the gold medal in an exciting final where nobody was willing to give an inch.

Hill held her nerves to eventually run away with the gold medal after a shoot-off with Kravchenko.

It was a good learning experience for the 19-year-old Shaktawat as she looks to grow in the sport.

Ganemat was third in the qualification with 117, while Shaktawat was fourth with 116.

India's Parinaaz Dhaliwal was ninth with 108.

In 2018, Sekhon had become the first Indian female skeet shooter to win a medal at the ISSF World Championship, as she claimed the bronze medal in the junior event in Sydney, Australia.

Having started shooting on the insistence of her father Amrinder Singh Sekhon in 2015, the youngster completed her hat-trick of silver medals in the senior National Shooting Championship when she won the silver medal in the 2018 championship in Jaipur.

In the selection trials held at KSSR in January, Sekhon had topped qualifying with a score of 120, which was a huge six points ahead of second place finisher.

In the finals of that trials, the Chandigarh-based woman shot 55, which was a clear four points ahead of second-placed Zahra Deesawala.

Sekhon also competed in the 2018 Asian Games in Indonesia, where she finished 10th.

In the men's event, Tokyo Olympics quota holders Angad Singh Bajwa and Mairaj Ahmad Khan could not make the final.