India struck gold not once but twice in their maiden appearance at the Winner International Boxing Tournament with Paramjeet Samota (+91kg) and teen sensation Shiva Thapa (56kg) finishing on top in the finals in Belgrade, Serbia.

Samota, a Commonwealth Games gold-medallist and Asian Games bronze-medallist, beat Marceta Mane of Bosnia in a thrilling contest in which both the boxers were tied 6-6 after regulation three rounds.

The Indian, however, managed to grab the yellow metal on the individual score.

Manpreet Singh (91kg), the silver medallist at last year's Asian Games, settled for a bronze medal after losing to Pulev Tervel of Bulgaria in the semi-final of the tournament.

India, invited in the event for the first time, thus finished with two gold and a bronze medal in the tournament. 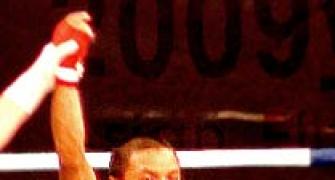