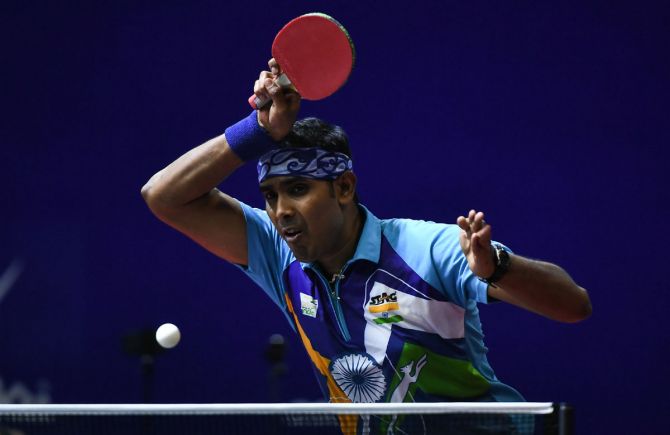 Indian paddler G Sathiyan has qualified for his maiden Summer Games with a comfortable 4-0 win over Pakistan's Muhammad Rameez in the Asian Olympic Games Qualification Tournament in Doha.

Sathiyan, ranked 38th, had defeated compatriot and world number 32 Sharath Kamal in his opening match on Thursday. On the basis of his world ranking and his win over Pakistan's Rameez, Sharath too has made the cut.

World number 62 Manika Batra, too, is also set to qualify despite her 2-4 loss to compatriot Sutirtha Mukherjee 2-4 in the women's singles event on Thursday evening. Sutirtha sealed her Tokyo berth with the win and Manika is likely to join her on the basis of her ranking.

Both Manika and Sharath will be on the plane to Tokyo but the ITTF will only confirm that in April, when all qualification events around the world are over.

"It's a priceless moment and I am really speechless to express how I feel right now. It's been a childhood dream of mine to take part in the Olympics and it is surely one of the best moments of my life!

"Now that I have qualified, I'm looking forward to putting in a strong performance at Tokyo and making my mark there," said Sathiyan, who recently won his maiden national title.

In the fourth game, the 2018 Commonwealth Games gold medal came back strongly to level the score but Manika was never in the right frame and failed to strike rhythm.

So much so, she managed only five points in the next to help Sutirtha go 3-2 up. In the sixth, the former national champion took seven points on the trot to emerge a deserving winner in less than 35 minutes.

Sharath and Manika, who play their mixed doubles semi-finals on Friday evening, take on Pang Yew En Koen and Lin Ye from Singapore. If they qualify the Asian Games bronze winning pairing will be India's shot for a maiden table tennis medal at the Olympics.

Players from East Asia, Middle Asia, South Asia, and Southeast Asia are contesting in the Asian Singles Qualification, being held at Doha, for a place each in the men's singles and women's singles, apart from the lone mixed doubles spot.

Except for South Asia, players from the other three regions will play in two stages, including the knockout round.

West Asia held its qualification event at Amman (Jordan) last year. Saudi Arabia's Ali Alkhadrawi in men's singles and 11-year-old Syrian, Zaza Hend, had booked their Tokyo berths. Zaza was the youngest, at that time, to qualify for the Games.

Kamal became the first Indian paddler to qualify for the Tokyo Olympic Games after a dominant win over Pakistan's Muhammad Rameez on Thursday.

The win over Rameez ensured at least a second-place finish for Kamal and it was enough to secure a spot in the delayed Games, scheduled to begin in July.

It will be Kamal's fourth appearance at the Olympic Games.

"It was a good match against Sathiyan but I made some errors and he capitalised on them to win the match. I was a bit nervous before playing against Rameez as I had never faced him before.

"But after the first few games I was confident that my strategy was working and I executed it well to maintain control," the world number Sharath said.

The 38-year-old Sharath said it's a big relief for him to qualify for this year's Tokyo Olympics.

"A lot of things have happened since March 2020. I became the champion in Oman and was in good touch, was preparing to play the qualification match in Thailand in just two weeks and suddenly everything came to a standstill.

"I have achieved the best rankings of my career and it's a huge sigh of relief especially the way this year has been. Though this will be my fourth Olympics, it will be my best Olympic Games."