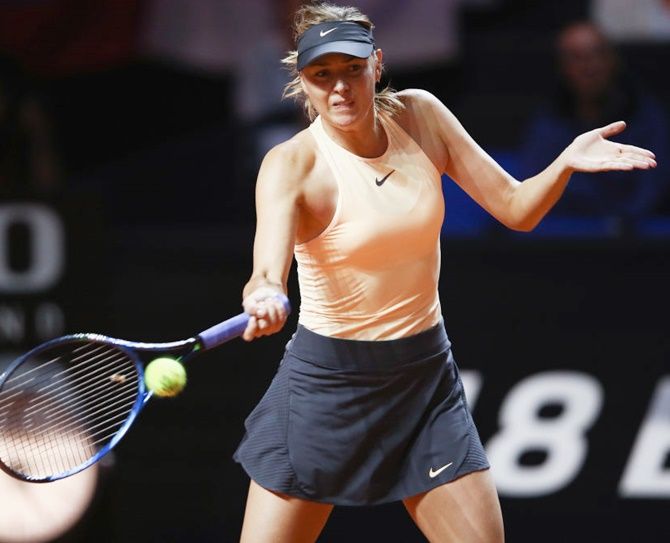 Maria Sharapova’s claycourt season got off to a poor start on Tuesday as she lost in three sets to Caroline Garcia in the first round of the Porsche Tennis Grand Prix in Stuttgart.

France’s Garcia staged a strong fightback to prevail 3-6, 7-6(6), 6-4 in two hours and 44 minutes for her first victory over the former world number one in her fifth attempt.

“It was a very close match. I know she is a fighter and it would be difficult until the end,” sixth seed Garcia, who saved two match points in the second set, said.

Sharapova, who came back from a 15-month doping ban at this tournament last April, won the first set with ease but the 31-year-old could not prevent a determined Garcia from dragging herself back into the contest through a tiebreak.

A 10th double fault by Sharapova at 4-4 handed Garcia the crucial break in the decider and the world number seven clinched the contest on her serve in the next game.

“I was a little more aggressive today and I returned a bit better. Finally I can say that after seven years I have beaten her... it’s an important win,” Garcia added.

Up next for Garcia is Ukrainian teenager Marta Kostyuk who beat Antonia Lottner 6-4, 6-1. The 15-year-old qualified for the main draw by overcoming France’s Alize Cornet on Monday.

“I can’t say I’m super surprised, because that’s what I work for, and I know I can play at this level,” Kostyuk said.

World number two Caroline Wozniacki powered past Russia's Ekaterina Alexandrova 6-2, 6-2 to reach the second round of the Istanbul Cup on Tuesday.

Denmark's Wozniacki was barely troubled by world number 101 Alexandrova as she converted five out of six break points to win her first claycourt match of the season in 68 minutes.

The reigning Australian Open champion, back in Istanbul after four years, next meets the winner of Wednesday's match between Kirsten Flipkens and Sara Errani.

"It was tricky, for sure," Wozniacki said. "The first match on clay is never easy, but I'm happy with the win. It's great just to get a match in and feel better with the movement. It's all about fine-tuning in matches like these."

"I'm using this as a preparation for the next few weeks, because the French Open is obviously around the corner. There's lots to look forward to, and I want to keep feeling like I'm getting into the groove on clay."

Earlier, world number 54 Donna Vekic advanced after Agnieszka Radwanska retired due to a back injury. Croatia's Vekic was leading 6-1, 2-0 when third seed Radwanska said she could not continue.

Zhang Shuai was stunned by Dutch qualifier Arantxa Rus 6-2, 6-3 while Kazakhstan's Yulia Putintseva fought back to get past sixth seed Sorana Cirstea 0-6, 6-1, 6-0.