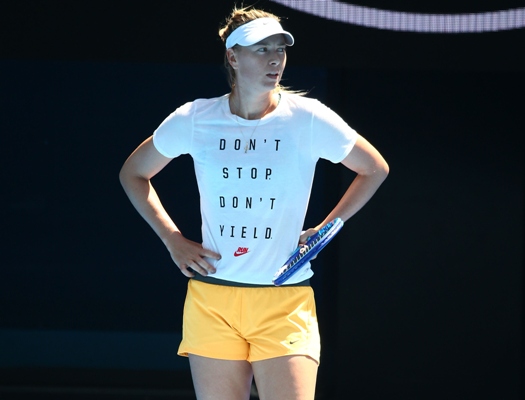 Maria Sharapova has admitted that she failed a drug test at the Australian Open this year.

The Russian star has confessed that she tested positive for Mildronate/Meldonium, a medicine she has been taking for 10 years owing to health issues, and the same is included in the fresh list of banned substances. She said she received a letter from WADA in December but didn't look at the changed list.

"I had been taking this medicine for the past 10 years, but on 1 January this became a prohibited substance which I did not know.

"In my long career I have been open and honest about many things. I made a huge mistake, failed the test and take full responsibility for it. I have let my fans down," she admitted.

"I don't want to end my career this way and I hope I will be given another chance," added Sharapova, admitting she was unaware of the sanctions to be imposed on her by the ITF.

Speculations were rife soon after Sharapova announced she will make a 'major announcement' at a press conference on Monday, and the rumor mills have been abuzz since.

Sharapova has won 35 WTA Tour titles, including five majors, in a glittering career. The last of those wins came at the Italian Open last May.

The Russian is also one of the 10 women players to have won all the four majors, thereby completing a career Grand Slam.

The 28-year-old was also spent 21 weeks ranked the number one player in the world. She remains the highest paid woman athlete.

Sharapova has not played since suffering a fourth round defeat at the hands of Serena Williams at the Australian Open in January, having struggled with a left forearm injury that forced her to withdraw from this week's BNP Paribas Open in Indian Wells.

However, the Russian said in the press conference that she wouldn't have announced her retirement in such a haphazard manner, in a Los Angeles hotel of all places.