Inter Milan and AS Roma picked up their first points of the Serie A season on Saturday after sharing an entertaining 0-0 draw at the San Siro.

Cagliari went top when they picked up their second win by defeating promoted Novara 2-1 in Sardinia.

Brazilian striker Thiago Ribeiro headed the dominant home side ahead on 38 minutes and Joaquin Larrivey doubled the lead with four minutes to go.

Japanese forward Takayuki Morimoto pulled a late goal back but it was not enough to prevent Novara slipping to defeat.

Roma, still coming to terms with coach Luis Enrique's new system, dominated possession but Inter, who lost at home to Trabzonspor in the Champions League on Wednesday, had the better chances in a surprisingly open game.

Pablo Osvaldo, Roma's Argentine recruit, had efforts saved at the beginning of each half while Diego Milito, Mauro Zarate, Diego Forlan and Wesley Sneijder all went close as Inter dominated after the break.

"They played the ball around a lot which made it difficult for us," Inter coach Gian Piero Gasperini told Sky TV.

"It was a shame we didn't make more of the spaces they left behind when going forward. We also need to be more clinical with the final ball but sometimes it just doesn't want to go in," he added.

Roma controlled the early exchanges and had the first chance when Osvaldo tested Julio Cesar's reflexes with a powerful shot.

Looking to avoid a fourth straight defeat as Inter coach, Gasperini ignored president Massimo Moratti's advice to play four at the back. 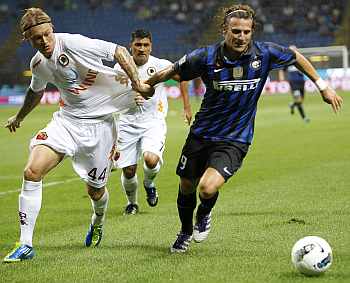 His defence was almost breached on 19 minutes when Fabio Borini's 20-metre shot forced Julio Cesar into a good save.

Roma, who lost at home to Cagliari in their season opener, again looked far from comfortable at the back and the home side went close to scoring three times in the first period.

Bogdan Lobont, who replaced Maarten Stekelenburg in goal when the Dutchman was carried off on a stretcher after receiving a kick on the head in the 18th minute, had to be alert to hold a 30-metre drive from Inter new boy Forlan.

Two minutes later the Romanian keeper stood tall to block a Milito shot at the near post.

The Roma defence was carved open again on 36 minutes as Sneijder, a growing influence in the middle of the park, set up Yuto Nagatomo and his fierce strike from the edge of the box flashed millimetres over the bar.

Julio Cesar then had to spread himself to thwart Osvaldo, Rodrigo Taddei fired over from distance and Borini's goalbound shot was blocked as Roma started the second half in determined mood.

It was Inter though who had the best chance early in the second half when Milito, unmarked five metres out, somehow headed Sneijder's bending free kick narrowly wide.

Substitute Zarate, on for Milito, went even closer on 64 minutes as he dribbled past two men before unleashing a long-range drive that went just wide.

Inter poured on the pressure in the final stages with Forlan shaving the post with a 25-metre effort and Sneijder twice going close.

The performance of their teams as much as the point may lift some of the early-season pressure on Gasperini and Luis Enrique who had lost their opening Serie A games and failed to impress in European competition.

"I'm happy with the result," said Luis Enrique. "It could have been better but it could also have been worse.

"Results give us confidence and once we start taking points everyone will feel that much better. I always think of attacking and I want players who are hungry to win."

There are eight more games on Sunday, the highlight fixture being champions AC Milan's trip to Napoli who finished third last term.

© Copyright 2022 Reuters Limited. All rights reserved. Republication or redistribution of Reuters content, including by framing or similar means, is expressly prohibited without the prior written consent of Reuters. Reuters shall not be liable for any errors or delays in the content, or for any actions taken in reliance thereon.
Related News: AS Roma, Gian Piero Gasperini, Wesley Sneijder, Luis Enrique, Julio Cesar
COMMENT
Print this article