Juventus scored three goals in the opening 19 minutes to destroy AS Roma 4-1 and move three points clear in Serie A on Saturday.

AC Milan's poor start to the season continued as they produced a patchy performance in a 1-1 draw at Parma, a result that failed to ease the pressure on coach Massimiliano Allegri.

Champions Juventus are now nine points ahead of Milan as their long unbeaten run continued. They have avoided defeat in their last 45 league matches. 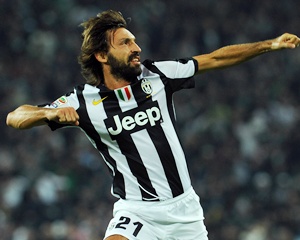 Andrea Pirlo's deflected free kick gave them the lead after 10 minutes although Roma's players protested that the free kick should not have been awarded, with TV replays showing there was no contact between Rodrigo Taddei and Claudio Marchisio.

Juventus took advantage and doubled their lead five minutes later when confusion in the Roma box led to Leandro Castan blocking Alessandro Matri's shot with his hand and giving away a penalty which Artur Vidal calmly slotted home.

Three minutes later Matri took advantage of a sloppy defensive line to stride on to a Vidal through ball and lift a deft finish past Maarten Stekelenburg.

Antonio Conte's side could have easily added to their total with Marchisio and Mirko Vucinic both hitting the crossbar before the break.

Roma were given a lifeline after 65 minutes when Leonardo Bonucci brought down Mattia Destro after the Roma attacker played a neat one-two in the Juventus area with strike partner Pablo Osvaldo who sent Gianluigi Buffon the wrong way from the penalty spot.

However, Juventus were in no mood to allow Roma off the hook and Sebastian Giovinco put the icing on the cake in the final minute, racing on to an Andrea Barzagli through ball to round Stekelenburg to seal the points.

The defeat leaves Roma on eight points, eight behind the champions and well off the pace.

"Matches like this have to teach us something, you learn from this, and the team needs to realise that we've done very little. We hardly won a tackle," Roma coach Zdenek Zeman, who is starting to come under fire, told reporters.

"I don't understand why we run so little and created hardly anything. It has to be a mental problem."

Stephan El Shaarawy gave Milan the lead five minutes into the second half with his fourth goal of the season, skipping past Cristian Zaccardo in the area and firing through Antonio Mirante's legs.

Roberto Donadoni's Parma responded well to going behind and were invigorated by the introduction of Jonathan Biabany.

Taking the game to Milan, they were rewarded after 66 minutes when Daniele Galloppa drilled home a low free kick.

Both sides pressed for the win in a frantic finale, but neither created much in the way of genuine opportunities and had to settle for a draw which leaves Milan on seven points.