Striker Edinson Cavani scored a superb hat-trick to give Napoli a 3-1 home win over defending Serie A champions AC Milan on Sunday.

Milan went ahead with an Alberto Aquilani header but it took less than two minutes for Uruguay forward Cavani to spring into action with the equaliser. 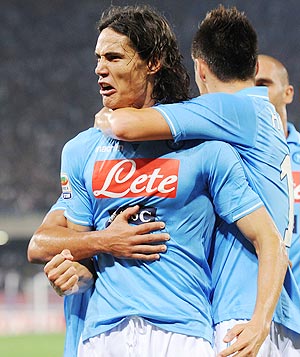 Cavani, who scored 26 Serie A goals as he helped Napoli finish third last season and qualify for their first Champions League campaign, added two more either side of half-time.

Napoli joined Juventus, Udinese and Cagliari on six points from two games while Milan were left languishing alongside Inter on one point.

Alessandro Matri scored early in the second half to give Juventus a 1-0 win at Siena, having been set up by Montenegro striker Mirko Vucinic, one of their new signings.

Udinese needed only half an hour to finish off Fiorentina as Antonio Di Natale, league top scorer last season, converted a penalty and Chile midfielder Mauricio Isla added the second in their 2-0 home win.

Cagliari beat promoted Novara 2-1 in Sardinia on Saturday when Inter were held 0-0 at home by AS Roma in a match between two sides struggling to find their feet under new coaches Gian Piero Gasperini and Luis Enrique.

Sebastian Giovinco scored twice, including a last-minute winner, in Parma's 2-1 win over Chievo but the home winger was sent off in injury time after picking up a second yellow card for playing on after the whistle.

Genoa won 2-1 at Lazio and Atalanta beat Palermo 1-0, Argentine forward German Denis scoring in a match in Bergamo which was interrupted by torrential rain for more than half an hour in the second half.

Deducted six points for their part in a Serie B match-fixing scandal, promoted Atalanta are unbeaten and have minus two points.

"It's great to see so much happiness, that's the most important thing," said Cavani after Napoli's win over Milan.

"We know our defects and where we have to work."

Milan took the initiative and went ahead after 11 minutes when Antonio Cassano's chip into the area was met with a flying header by Aquilani.

Napoli were level 90 seconds later when Cavani drilled a low shot under Christian Abbiati after a free kick was inadvertently headed to his feet by Christian Maggio.

Walter Gargano set up the second with a superb run from one penalty area to the other before slipping the ball to his fellow Uruguayan Cavani to rifle home.

The game could have taken a different course if Aquilani had converted shortly afterwards when he had only Morgan De Sanctis to beat but the Napoli goalkeeper tipped the ball away.

Cavani completed his hat-trick six minutes after the re-start with another emphatic finish after Alessandro Nesta's half-clearance landed at his feet.

Milan's desperation was summed up with a yellow card for Alexandre Pato for diving and by Cassano's continuous histrionics.

© Copyright 2022 Reuters Limited. All rights reserved. Republication or redistribution of Reuters content, including by framing or similar means, is expressly prohibited without the prior written consent of Reuters. Reuters shall not be liable for any errors or delays in the content, or for any actions taken in reliance thereon.
Related News: Napoli, Edinson Cavani, AC Milan, Alberto Aquilani, Atalanta
COMMENT
Print this article